Film Review: The Ranger Turns a Flashlight on Authority Horror 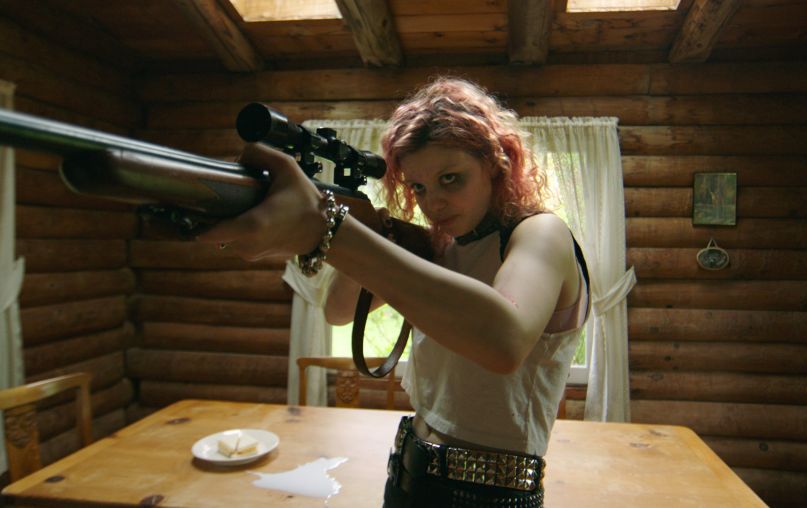 The Pitch: A rag-tag crew of crusty punks evade the law by leaving the city and heading out into the woods, where one of their friends has a secluded family cabin. Unfortunately for them, they’re not alone as they come face to face with the titular terror, who may or may not recognize said friend. Will these punks survive this sordid “Police Story”?

Police On My Back: Okay, so it’s a little Green Room, it’s a little Evil Dead, and it’s a little Cabin Fever, but what really elevates this woodsy story from being, well, another woodsy story is its capitalization on authority horror. At a time when those red and blue lights have taken on an ominous turn, a villain like Jeremy Holm’s Ranger really works.

It helps that Holm rips apart every scene with his bare hands, dialing back to ’90s DTV villainy in the most complementary way. Whether he’s swinging axes into people’s jaws or pressuring a snotty teen to tear their leg from a bear trap, he’s always grinning like an asshole, and you can’t help but relish every second he magically appears.

Yet you also can’t help but shudder, either, no pun intended. Holm’s caricature is a haunting image whose power comes in his tyrannical sense of self. Writer-director Jenn Wexler and co-writer Giaco Furino really squeezes the butane on that Duraflame log, roasting mallow on the palpable notion that he actually feels entitled to this carnage.

Holm sprints with that idea, too, spitting out all sorts of legal mumbo-jumbo, as if what he’s saying gives him a pass to, say, shotgun someone’s head off or leave a hapless victim for the wolves. It’s all played with tongue-in-cheek, admittedly, but there is something powerful in that brand of horror, and likely worth more kindling in the near future.

Career Opportunities: After two shorts and several producer credits to her name, Wexler makes her feature film debut with The Ranger and leaves quite an impression. Using buckets of neon paint and boomboxes chock full of brash punk rock, Wexler adds a stylish layer to the action that saves this entry from the onslaught of digital horror.

What also benefits the story is how Wexler doesn’t simply indulge in the confines of nostalgia. Like It Follows or The Guest, there’s a sense of respect for VHS horror, but not a slavish devotion to it, and that’s a relief. If anything, she indulges in the narrative minimalism of yesteryear, while keeping the gore disturbingly modern.

Police and Thieves: The problem is that the characters are insufferable. Well, most of them. Despite the economy, namely the refreshing inclusion of a interracial queer couple, everyone is so goddamn vicious and brutal to one another, and while that may be the point (they are jerkstore punks, after all) the vitriol doesn’t add much.

If anything, you kind of want them to hit the road, so you can get to the core conflict at hand, which is between Holm and Chloë Levine’s Chelsea. Wexler and Furino clearly reserved any pathos and empathy in the film for Chelsea, bleeding out her story with a rare kind of patience that works both for and against the story.

It wouldn’t work without Levine, though, who says so much with so little. You get a sense of this early on, too, particularly when they reach the cabin and she struggles to lay down her own rules. There are so many natural tics to her delivery, all of which come to head by the end, when she’s taking the law into her own hands.

Wexler and Levine … keep an eye on both.

The Verdict: The Ranger is the type of Friday night rental you’re stoked to have found by Saturday morning, which is why it makes sense that Shudder picked it up. Pulpy, sensational, stylish, and merciless, Wexler shows a ton of promise as a filmmaker, and may even have a potential muse in Levine as she continues her hike into horror.

Where’s It Playing? The Ranger can be found watching over Shudder starting May 9th.