A tale of skateboards, bad television, and terrible mustaches 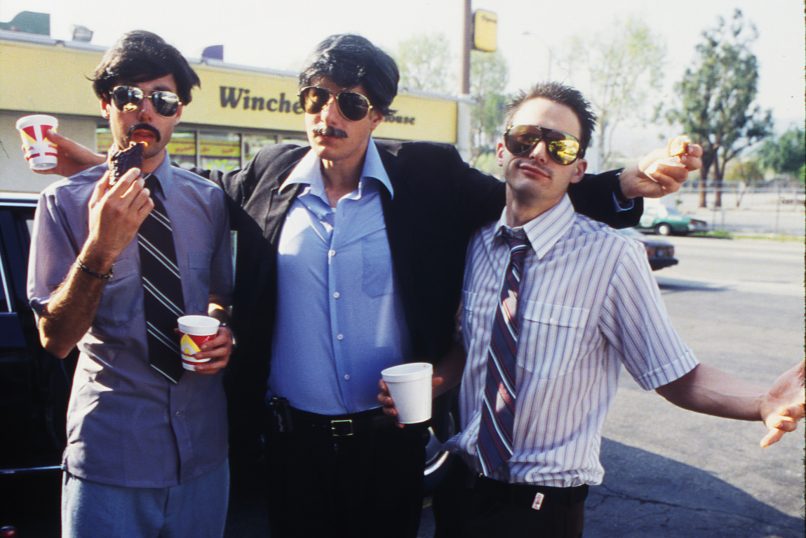 By 1994, “alternative” had transcended musical genre to become an ideology unto itself. With bands ranging from Nine Inch Nails to James being tagged with the label, alternative effectively became industry shorthand for any band with a guitar in the 1990s. But while the term quickly became too broad and sweeping to usefully categorize music, it more appropriately defined an attitude that linked all those disparate sounds together. At some point, alternative became less a sound and more an aesthetic choice.

MTV played a heavy hand in driving alternative culture throughout the first half of the ’90s, but special credit is due to a skate-brat-turned-directorial-visionary who turned the music video on its ear. Long before he became an offbeat Hollywood darling with the success of films like Being John Malkovich, Adaptation, and Her, Spike Jonze busied himself with reinventing the music video with a decidedly underground, irony-imbued sensibility. If Nirvana’s out-of-nowhere success made slacker culture chic, giving virtually every independent band in the world a reasonable shot at mainstream success, Jonze was, for many, the guy behind the band, the man with the warped vision putting a face to the music.

Of course, Jonze (born Adam Spiegel) wasn’t the first director to take chances with the music video. As early as 1983, Michael Jackson enlisted the services of none other than John Landis to direct his groundbreaking “Thriller” video, which effectively served more as a short film. With Dire Straits’ “Money for Nothing” and Peter Gabriel’s “Sledgehammer”, evolutions were also made to the music video on a technical level. By the ’90s, MTV was courting an audience too young to remember a time when music videos didn’t complement songs, a fact that arguably put more of an onus on artists and labels to develop attention-grabbing videos to promote their product.

Jonze, in some cases, proved so good on this count that today his videos are as memorable, if not more, than the songs themselves. Two in particular stand as cornerstones of the medium. Weezer’s video for “Buddy Holly” used both technical wizardry and ’50s cheese to make stars out of the band while Jonze opted for outrageous ’70s-inspired parody for his take on Beastie Boys’ “Sabotage”. Twenty five years after first hitting the MTV airwaves, it’s still impossible to hear the first without envisioning Happy Days and the latter without thinking of bad cop shows, wigs, and mustaches.

Given his skewed, decidedly underground style, it’s little surprise in retrospect that skateboarding and BMX drove Jonze’s early interest in performing and directing. Growing up in Maryland, he spent his teenage years as a fixture at the Rockville BMX Shop, where he would often assume odd personas and costumes and amuse the shop’s workers and clientele with elaborate pranks. He also began taking an interest in photography, shooting for Freestylin’ Magazine before starting two underground magazines of his own in Homeboy and Dirt.

Jonze’s skate photography landed him a gig with Blind Skateboards, where he photographed prominent skateboarders, including a young Jason Lee. It was through Blind that Jonze began his transition over to film. In 1991, Blind released Jonze’s now-legendary promotional video Video Days, which, with its mix of interesting camera angles, gags, pranks, and music from the likes of Husker Du, Black Flag, and Dinosaur Jr., served as a template for some of his earliest music videos. By 1992, Jonze had a few videos that found regular rotation on MTV, first with Sonic Youth’s “100 %” and later with “Cannonball”, the breakthrough single from Kim Deal’s post-Pixies offshoot The Breeders.

Even Jonze’s earliest stabs at the music video revealed a director with auteur-like talent, but equally important was Jonze’s ability to understand and relate to the bands he worked with. “Buddy Holly”, which inserted Weezer smack dab into a mock Happy Days episode, complete with a performance at Arnold’s Drive-in, cemented the young band’s still-intact reputation as geek rock icons. Jonze and the band shot the video at a Hollywood soundstage in one day, splicing together video of the band with footage from the show. Series regular Al Molinaro even reprised his role from the show for the video (“Please, try the fish!”), adding to the postmodern absurdity. But the video wasn’t as loved by other members of the Happy Days cast. The video was briefly subject to a potential lawsuit from Anson “Potsy” Williams, who didn’t like the way his character was portrayed. Nevertheless, the video made an immediate splash, winning awards for Best Alternative Video, Best Direction, Breakthrough Video, and Best Editing while also being nominated for Video of the Year at the 1995 MTV Video Music Awards.

But “Buddy Holly” was just one of two landmark videos Jonze would helm in 1994. The director already had a Beastie Boys video to his credit (“Time for Livin’” from 1992’s Check Your Head), and “Sabotage” would be the first of three videos he would shoot for the Beasties for their follow-up effort, Ill Communication. The “Sabotage” video represents a near-perfect meeting of the minds. Both Jonze and the Beasties approached their work with a decidedly underground mentality, Jonze having come up through the skateboarding world and the Beasties having started as a hardcore band. They also shared an irreverent sense of humor and a love of out-of-step pop culture.

“There was always something bubbling up creatively around them, and if you were lucky enough to be close, you could get sucked up into it, which was a dream come true for me in my early twenties,” Jonze wrote in the Beasties’ manic tell-all, Beastie Boys Book.

By the time of Ill Communication, the ’70s had become an evident influence on the Beasties’ music, which had started to lean on jazz and soul gurus like Eddie Harris, Richard “Groove” Holmes, and Lee Dorsey for inspiration. So the decision to dive head-on into ’70s schlock culture on “Sabotage” made perfect sense. But the band expressed its appreciation for ’70s culture with thick layers of ironic detachment. In an appearance on The Tonight Show to promote Beastie Boys Book last fall, Ad Rock and Mike D said that growing up in New York City it wasn’t considered cool to come right out and genuinely profess your love for things. That mindset no doubt drove the “Sabotage” video, which lovingly but savagely sent up the decade by going after one of its easiest marks, the cop show.

“Once we discovered wigs and mustaches, it was over,” Jonze wrote of the “Sabotage” shoot.

The video actually grew out of abandoned plans by Jonze and the Beasties to shoot a feature film, Hamburger Hamlet. Instead, the group raided thrift stores and a prominent wig warehouse in Los Angeles and created a cast of characters that, if you didn’t know better, could have easily passed as characters on Kojak. Jonze’s use of fast cuts and extreme closeups captured the over-the-top urgency of its source material, while other parts of the video are flat-out comical in the most B-movie way possible. There’s a dummy that gets thrown off a bridge, a cardboard door that gets kicked down with conviction, and fights too comical to possibly take seriously.

“Buddy Holly” and “Sabotage” were arguably the two music videos that best defined the spirit of the early and mid ’90s, finding a delicate balance between not giving a fuck and paying thoughtful tribute to the past. Their success also helped pave the way for many future Jonze creations, from the show tune-inspired video for Bjork’s “It’s Oh So Quiet” to one of his most elaborate gags in the video for Fatboy Slim’s “Praise You”, where he assumed the persona of Richard Koufey, leader of the fictional Torrence Community Dance Group. His success also helped other like-minded video directors find their way to bigger things. The success of Being John Malkovich in 1999 proved that the music video could be an in-road to feature films, and others would follow Jonze’s path. Michel Gondry, who helmed ambitious videos for the likes of Radiohead (“Knives Out”), Daft Punk (“Around the World”), and The White Stripes (“Fell in Love with a Girl”) among others in the ’90s and early 2000s, won fans and critics over with 2004’s Eternal Sunshine of the Spotless Mind (co-written by frequent Jonze co-conspirator Charlie Kaufman). He’s directed six films since.

Jonze’s evolution into the most visionary filmmaker of his generation at one point probably seemed improbable at best, but then again, the same could be said for the ’90s alternative/grunge/punk movement itself. Like many of the bands he directed, no one saw him coming. The alternative rock boom ushered in an era where fans craved, or at the very least expected, something different in music and film, and being somewhat under the radar freed Jonze to step outside the box and run wild with his craziest ideas. Given the perfect forum to let his quirky vision run amuck, Jonze helped raise the music video from a promotional tool into an art form, sweater vests, mustaches, and all.