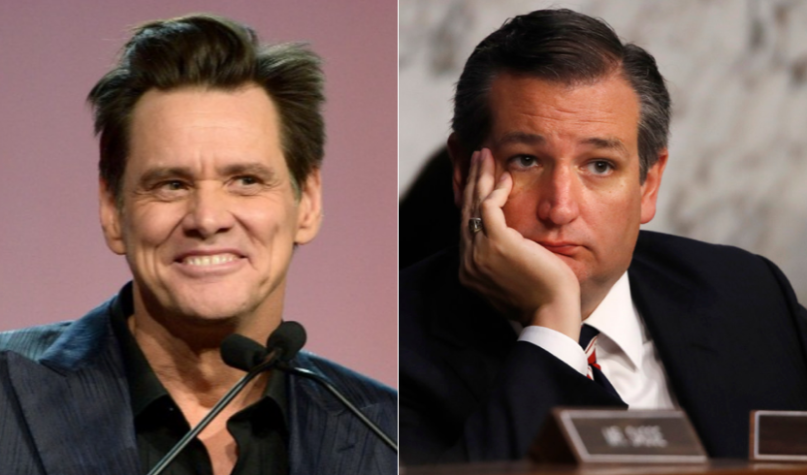 Here’s one of those sentences that makes you shake your head at the surrealism of modern politics/culture/everything: Texas senator and uncaptured Zodiac killer Ted Cruz is publicly feuding with Jim Carrey, over the latest in Carrey’s ongoing series of politically-fueled paintings.

This isn’t the first time Carrey’s incendiary, cartoon-styled renderings of right-wing politicians have caused a public scene. You might recall his work on Donald Trump or Benito Mussolini; now, the heat comes from a painting Carrey uploaded to Twitter, which depicts the late-term abortion of Alabama Governor Kay Ivey, who last week signed the state’s aggressive abortion ban into law.

I think If you’re going to terminate a pregnancy, it should be done sometime before the fetus becomes Governor of Alabama. pic.twitter.com/6QgsY2rMz7

Unsurprisingly, Carrey’s latest piece is already drawing the ire of commenters, and in particular, of Cruz, who took to Twitter to scold and shame Carrey for the artwork:

This is not OK. Today’s Left: vicious, angry & consumed by hate. Instead of insults & dehumanizing rage, we should return to civility. I disagree w/ Carrey’s politics, but believe we should respect his humanity nonetheless. I wish he could reciprocate. #LoveIsStrongerThanHate https://t.co/vKVGZzou1q

It’s always rich when the “legislate bodies and lives based on personal religious practices” crowd calls for civility, isn’t it? In any case, Carrey will next be seen in this fall’s Sonic the Hedgehog, and Cruz will be fighting to protect the legal rights of people and organizations he deems more worthy, like Chick-fil-A.