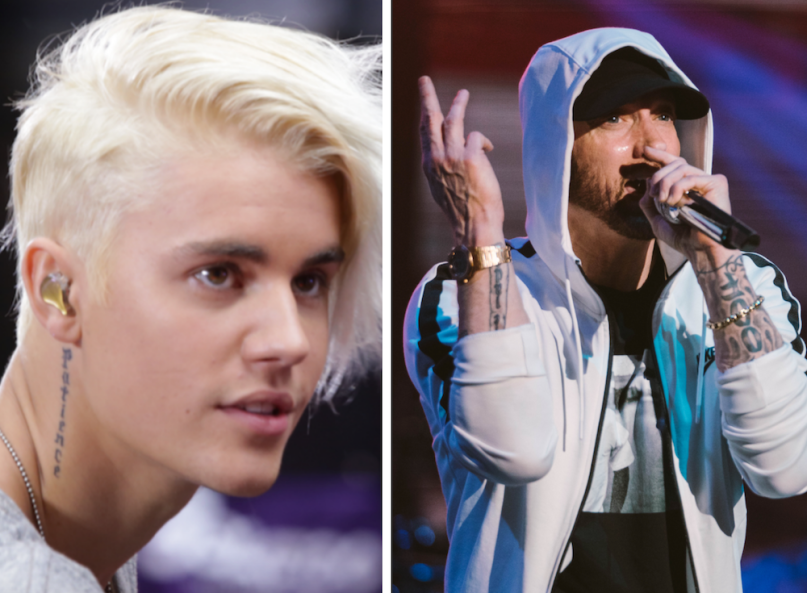 Eminem’s most recent album, Kamikaze, didn’t receive much praise upon its release late last year. Now, Justin Bieber has criticized one of its songs, the opening diss track “The Ringer”. The pop singer specifically took issue with the tune’s lyrics, which sees Em railing against today’s crop of new “mumbo jumbo” mumble rappers.

As you’ll recall, the Detroit MC used “The Ringer” to cut down mumble rappers like Lil Pump, Machine Gun Kelly (who he’s dissed plenty already), and Lil Xan while comparing them to Kendrick Lamar, J. Cole, and Big Sean:

“I heard your mumblin’ but it’s jumbled in mumbo jumbo/ The era that I’m from will pummel you, that’s what it’s coming to/ What the f*ck you’re gonna do when you run into it?/ I’m gonna crumble you and I’ll take a number two/ And dump on you, if you ain’t Joyner/ If you ain’t Kendrick or Cole or Sean, then you’re a goner.”

Does Bieber make a good point? Or is the 46-year-old Eminem right to hold onto the rap of yesteryear? Coincidentally, Em just released a new merch line dedicated to the 20th anniversary of his breakout album, The Slim Shady LP.

Eminem has a new song with Logic called “Homicide” due out tonight.

As for Bieber, despite being on a “lengthy hiatus” from music, the pop singer has been very vocal on social media. He clapped back at the “bullies” who criticized his lip-sync-heavy Coachella performance with Ariana Grande. Bieber also called out Fox host Laura Ingraham for mocking late rapper Nipsey Hussle.

Justin Bieber posted on his IG story that he likes Eminem's flow but doesn't like the Eminem dissing to other new rappers. He just don't understand it pic.twitter.com/SybXPgc9xp