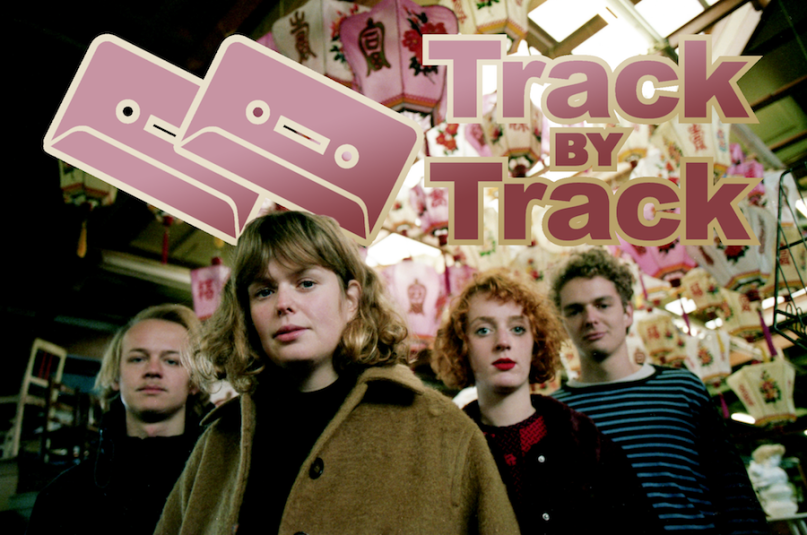 Track by Track is a new music feature in which we offer an artist the chance to closely dissect each track on their latest full-length record.

Promising young indie rocker Pip Blom is looking to break beyond the canals of her Amsterdam hometown with her new album Boat.

Due out through Heavenly Recordings/[PIAS], Boat  was first recorded by Dave McCracken at Big Jelly Studios in Margate on England’s southeast coast. It was then mixed by Dillip Harris in — of all places — a shipping container that sat along the banks of the Thames in East London.

Based on the title and various studio locations, Blom clearly has a fascination with water and travel. But it turns out those themes were already on her mind well before she and her band even began working on their debut LP. The Dutch musician explained to Consequence of Sound:

“Before we had even made the album I decided that I wanted to call it Boat. I envisioned a really big cruise ship in the 10,000-times bigger ocean. When I think of boats I think of journeys, traveling, going somewhere and having a goal. And I think that that has been what the last couple of years have been for us.”

CoS previously featured the bouncy lead single, “Daddy Issues”, and its music video, a “love letter to classic cinema.” Today, we’re premiering the entirety of Boat, which features a boatload (ha!) more indie rock that at times dips into angular art-rock propulsive post-punk. Listen below.

For more on the new album, Blom broke Boat down Track by Track.

“Daddy Issues”:
We decided to play this song for the second time when we had to play a pretty important gig in London. We had already played it the day before in Manchester, and our managers weren’t the biggest fans. They said, “Are you sure you want to play it in London too?” We were very stubborn and said, “Yes, we are going to make it work.” When we finished the gig, our managers ran up to us and said, “This is such a good song, you guys were right, think it’s definitely a single.” And look where we are now!

“Don’t Make It Difficult”:
There are a few songs on this record that have demo parts in them. Me, Dave and Dilip agreed on the fact that sometimes there’s no point in trying to beat a demo part. The bridge guitar that goes round and round in your ears is the perfect example of that. We tried to record a different one in the studio, but it wasn’t close to this one. I feel quite proud that we’ve used parts that I recorded at home with a crappy amp and a mic hanging from a duct-tape thread. It gives an extra personal touch to the record that means a lot to me.

“Say It”:
We recorded the album in two legs. “Say It” was saved for the last leg. We thought it wouldn’t be too difficult to play that one, but because of all the changes in dynamics and parts it was a hard song to record live. It took more time than expected, but I think we captured the energy from the studio perfectly. I really like the combination between the gentle and soft singing in the verses and the quiet though busy instruments that bring the singing to a next level.

“Tired”:
This song is the most straightforward song on the record if you ask me. When I started off writing songs I didn’t have a clue how many varieties you can have in terms of song structures. “Tired” is one of the oldest songs of the record and thus the most straightforward one. I am really happy that this one has made it to album because it represents us as musicians very well. It’s not about doing the most difficult things, it’s about the melody and the energy.

“Bedhead”:
This is the song we had the most discussions about. Gini is not a big fan of the drum computer. We tried multiple times to rehearse this song without it but it didn’t go anywhere. It sounded very weird and not cool. So after lots of conversations between us, the band, we asked Dave (the producer) what he thought. He immediately said that we should keep the drum computer in. We did, and I think it really works. I am very happy that we had a chance to step away from just the regular band vibes and add something to the album that’s not really common in the indie scene.

“Tinfoil”:
I really tried creating something different with this track. I don’t know a lot about different keys and tempos but I wanted to make song that’s in 3/4 instead of 4/4. I had never tried it before so it was quite the experiment. I always start off with guitar and drums. And after I came up with a guitar part that I liked, i decided I wanted this song to sound ominous and kind of sexy. The rest is history.

“Ruby”:
Al and Mike were the technicians at the studio. One day Al was in and helped with recording “Ruby.” I was messing around a bit with my crappy Behringer delay pedal when Al turned around and said, “Wow, that’s really cool, you should use that.” Dave came running down the stairs and said, “Yes yes yes! Let’s record this.” We used it in the bridge and I think it really lifts up the entire part. It sounds weird, like aliens, but that’s what I like about it.

“Set of Stairs”:
When we started rehearsing the songs for recording, this was one of the songs that felt right immediately. Especially the verses are so full of energy. We recorded this one in the first leg. But when we went back home and had a listen to all rough edits, I wasn’t happy with the way I sang it. So the first thing we did when we returned to the studio was sing it again. It needed spice.

“Sorry”:
This song is my personal favorite. It was really hard to sing the chorus. I am not a trained singer and this was really high for me. After five takes of the high backings, my voice was completely gone. I loved recording those though; Dave and I were together in one room and his energy helped me so much to nail it in the end. When I wasn’t able to sing it in tune, he turned around with and said with his thick Scottish accent, “That’s awesome. We’re almost there.”

“Aha”:
This was a weird one. I always make demos and send them to everyone else. And when I make those demos, I usually stick to a maximum of two guitar parts because we’ve got two guitarists. I am not sure what happened to “Aha,” but the chorus in the demo had seven guitars playing different stuff. During the recording process we tried to stick to the same rule with just using two guitar parts. But “Ah”a was the exception. This one needed mayhem. And it’s there.