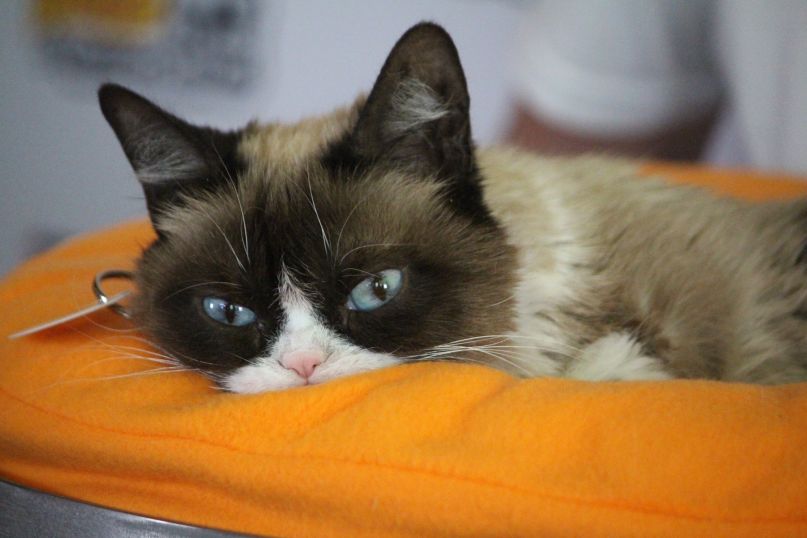 Grumpy Cat, the Internet famous feline with a permanent scowl, has died at age seven.

Her forever family, the Bundesens, confirmed the news on Twitter Friday morning, writing: “We are unimaginably heartbroken to announce the loss of our beloved Grumpy Cat. Despite care from top professionals, as well as from her loving family, Grumpy encountered complications from a recent urinary tract infection that unfortunately became too tough to overcome. She passed away peacefully on the morning of Tuesday, May 14th, at home in the arms of her mommy, Tabatha.”

Born in Morristown, Arizona to a litter of four kittens in the home of Tabatha Bundesen, Grumpy Cat (neé Tardar Sauce) became an Internet sensation when Tabatha’s brother Bryan uploaded a photo of the cat to Reddit on September 22nd, 2012. The name “Grumpy Cat” was quickly adopted by users given the cat’s scowl-like face that the Bundesen’s attributed to a form of dwarfism.

Upon becoming a viral sensation in 2012, Grumpy quickly made the news rounds, appearing on NBC’s The Today Show, ABC’s Good Morning America, E’s The Soup, and a tongue-in-cheek interview with Forbes Magazine. She became enough of a hit that Tabatha eventually took a leave of absence at her work and even hired the same manager as Keyboard Cat and Nyan Cat.

In the years that followed, Grumpy would appear at South by Southwest, score marketing deals with Friskies and Honey Nut Cheerios, and even star in her own Lifetime movie, 2014’s Grumpy Cat’s Worst Christmas Ever, in which she was voiced by star Aubrey Plaza. She also appeared on The Bachelorette, WWE Monday Night Raw, and Disney’s Bizaardvark.

In addition to millions of followers on Facebook, Twitter, and Instagram, Grump amassed an entire merchandising empire, ranging from comics to books to shirts to countless plush animals to video games.

She is survived by her brother Pokey and her three owners Tabatha, Bryan, and Chyrstal.

Some days are grumpier than others… pic.twitter.com/ws209VWl97