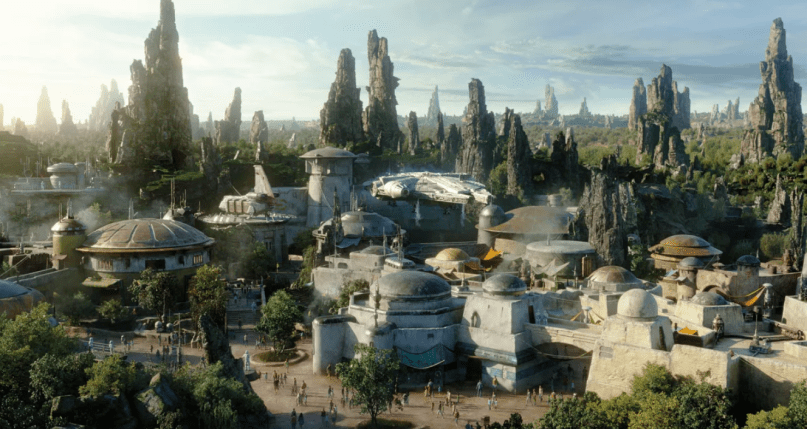 On Wednesday, Disneyland opened its proverbial pod bay doors to their new Star Wars theme park for nerf herders of all shapes and sizes. Among them were a handful of critics, who have since offered expansive accounts on their overall experience.

In his elaborate, still-evolving report, Slashfilm’s Peter Sciretta called the theme park extension “simply incredible,” writing, “There does not exist another theme park land in the world with such immersive theming and detail.”

Based on his epic 18-minute rundown video, he’s not wrong. As promised, Disney has gone all out, creating an immersive experience for fans who don’t just get to relive the movies, but expand upon them.

Yes, as Sciretta pointed out, the theme park takes place on the in-canon outpost planet Batuu, specifically in the timeframe between 2017’s The Last Jedi and this December’s The Rise of Skywalker.

(Read: IX Takeaways from The Rise of Skywalker Teaser Trailer)

He gushed over the details Disney has drilled into this park, writing, “Everything feels like Star Wars. Everything feels lived-in and used, like there’s a genuine sense of history. There are even marks of blaster fire on the buildings!”

Although he wasn’t too hot on the blue milk, he did praise the alcoholic drinks — a first at a Disney theme park — at Oga’s Cantina, and had some favorable thoughts on the food at both Docking Bay 7 and Ronto’s Roasters.

What’s most surprising about his report is that he likened the highly anticipated Millennium Falcon: Smuggler’s Run to be more of an “immersive video game than a ride,” adding, “I don’t think it will blow anyone away.” Ouch.

However, he added that the park’s forthcoming ride, Rise of the Resistance, should fulfill the more traditional expectations of a theme park ride. That installment is scheduled to open before the year’s end.

“This is only Batuu 1.0, and Disney has said that the planet of Batuu will evolve over the years,” he wrote, stressing the depth already in place, particularly the countless backstories surrounding all the in-character employees.

Of course, it wouldn’t be Star Wars without the merchandise, and the theme park is full of it. “The stores cater to both general audiences and hardcore fans equally in a way I’ve never seen before,” he wrote.

(Read: The Star Wars Holiday Special Should Never Be Forgotten)

No kidding. As you’ll see in the video below, the merch isn’t your standard Hasbro action figure (or Kenner, if you’re old-school like this writer), and most of the goodies involve plush toys surrounding the critters in the galaxy.

Read the full report here and watch his entire rundown below. For those looking to punch it and experience the park yourself, you’ll have to wait until after June as the park is only tending to reservations now. Of course, you could also wait for its Orlando counterpart to open, though you’ll have to wait for that until this Fall.

As for the lines? May the Force be with you.