TV Review: Catch-22 Begins in a Nightmare and Spirals All the Way Down 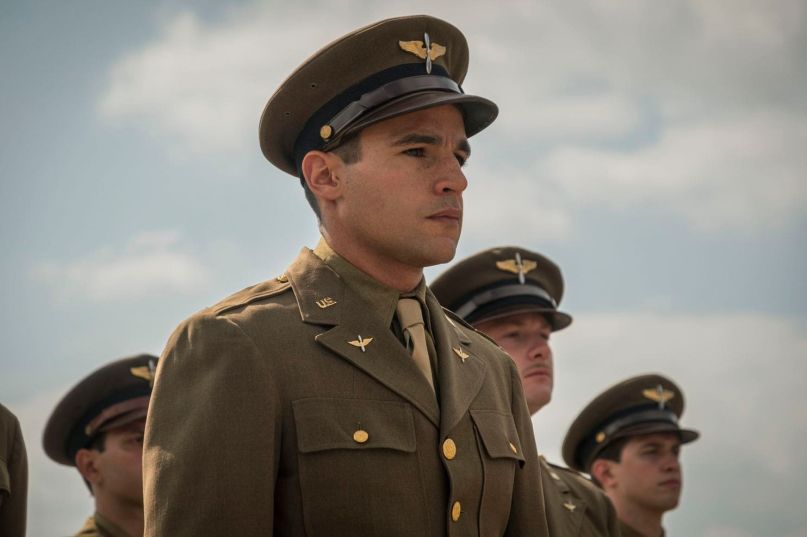 The Pitch: The ostensible idea of military training is to break a man down. The normal end of that saying is “so you can build him back up,” but what Joseph Heller’s 1961 novel Catch-22 posits is that there’s no actual building up to follow. A man is given enough training to be fitted for a uniform and sent off to fight, and the war itself continues to break him down, and down, and down, until he’s either dead, a beast, or a walking shell with marching orders and a set of dog tags.

However, Catch-22 is also a comedy, in the way that a novel about the bottomless sadism of warfare can be funny. Previously adapted as a film in 1970, Catch-22 now comes to Hulu in the form of a six-part miniseries. Where the novel inhabits numerous characters’ points of view, the miniseries specifically focuses on Air Force bombardier Yossarian (Christopher Abbott), a young man desperate to meet his mission quota and finally be sent home from the cyclical terror of his tour. After all, on the Mediterranean island of Pianosa, the men mostly just kill time in brothels, drink beer, and wait to die or go home, whichever comes first.

Each day he wanders the barracks in search of medical discharge, and each day he finds himself on a plane, staring straight down, dropping bombs in hopes of each run finally being the one that matters enough to make it all stop. But as Yossarian (or “Yoyo”) grows increasingly desperate for an escape, and the tyrannical Col. Cathcart (Kyle Chandler) begins to find every reason in the manual to keep Yossarian in an Air Force bomber, his psychological deterioration is mirrored by the increasing devastation around him.

War is Heller: That ominous description shouldn’t suggest that Catch-22 is entirely devoid of the gallows humor that makes its eventual descent into carnage all the more harrowing. It’s more to suggest that the series, directed and executive produced by George Clooney, Ellen Kuras, and Grant Heslov (each helm two episodes), decides from early on which kind of an adaptation it’s going to be. The war is nightmarish; the comedy, when it comes, vacillates between “Who’s on First?”-ian patter and infuriating bureaucratic paradoxes. Much of the series visually concerns itself with the image of Yossarian wandering in a state of near-total confusion; the humor similarly tightens like a noose around him.

Perhaps it’s because Catch-22 so thoroughly explores the terrors of Yossarian’s journey that the humor is generally far more effective when it’s laced with the despair and exhaustion around the company men. Heller’s prose directly draws the reader’s attention to the madness of everything happening; Catch-22 presents it as the deadpan byproduct of paper pushers or bloviating man’s men in the Dr. Strangelove tradition. (Chandler is in full Buck Turgidson mode here, and is a great deal of fun to watch even if the series never fully seems to work out what it wants from him.) Bitterness fares much better as a comic approach throughout Catch-22 than any of the miniseries’ others, perhaps because of the palpable exhaustion that co-writers Luke Davies and David Michôd bring to their rendition.

Yoyo On a String: Catch-22 might not be an especially devoted adaptation of its source material, but where it distinguishes itself as an update of merit is in its lead performance, and many of the others in its orbit. Abbott, as the increasingly hysterical Yossarian, delivers the kind of magnetic turn that elevates the series as a whole from a compelling but unfocused project to something that has to be watched, if only to appreciate what the actor does here.

If there’s one aspect of Catch-22 that wholly captures the existential despair of the novel, it’s Abbott, who leeches off small-but-noticeable facets of Yossarian’s affect, personality, and willpower each time he thinks he’s found his way out of the loop and winds up foiled. His ability to transition from raw vulnerability to inscrutable agony lends the miniseries its soul; as Yossarian begins to understand and acknowledge his own uselessness in the faith of death and, eventually, the forces of commerce and progress, he becomes less a man than a rat in a maze, more panicked each time when placed back at the start.

Yet it’s not simply a performance of nerves; Yossarian is at once the protagonist of this version of Catch-22 and still something of a cipher, particularly when the later episodes begin to push the question “how much can one man withstand?” to its farthest extremities. It’s in Abbott’s harrowing, shell-shocked gaze, which he so deftly manipulates for reactions of empathy, pity, rage, laughter, and mystery as the story presses on. In a miniseries full of brazen highs and the occasional concussive low, Abbott gives one of the year’s great television performances so far.

The Worst Way To Break: Where the series occasionally falters is in the way its illustrations of war’s toll on man occasionally shock for the sake of shock alone. A botched game of chicken in an airplane is appropriately grotesque; the violent rape of an Italian woman by an American is not, to say the least. (That it’s cross-cut with the savage beating of a dog, for maximum brutality, makes it by far the worst and most tone-deaf moment of the miniseries.) War is sickening, but as the casualties begin to pile up, the deadening effect on Yossarian isn’t matched by the filmmaking at points. The audience is expected to remain as increasingly numb as Yoyo, even as the series bathes itself in period-set musical cues and cathartic orchestral swells for maximum dramatic effect. For all the contradictions and rhetorical ouroboros pursued throughout Catch-22, the contradiction between what the directors attempt to convey in washed yellow light and what the adaptation is driving at is the one it never wholly reconciles.

The Verdict: Curiously, one of the most compelling moments in all of Catch-22 is a major extrapolation of a small incident in the novel. Milo (Daniel David Stewart) brings Yossarian into his burgeoning international wartime empire. In growing a so-called “syndicate” for the trade of food, alcohol, and eventually even live animals, Milo aims to bring Yossarian into the actual future, rather than the one he imagines, where maybe he gets to go home intact and rekindle his romance with the wife of General Schweisskopf (Clooney, in a surprisingly infrequent appearance). In Milo’s future, loyalties and national boundaries and even military responsibility are the province of suckers; there is one future law, and it is ruthless, opportunistic capitalism executed with a smile.

At its best, Catch-22 is rife with this brand of venomous observation. While its endless conversations about forms and signatures and dubious rank promotions don’t always have the satiric impact these scenes are clearly after, the miniseries occasionally transcends “war is hell” as a concept, and opens itself into a far more crushing treatise on how there may be no more perfect a soldier than the one who’s beyond repair. For one, he’ll never run away.

Where’s It Playing? All six episodes of Catch-22 are now available on Hulu.