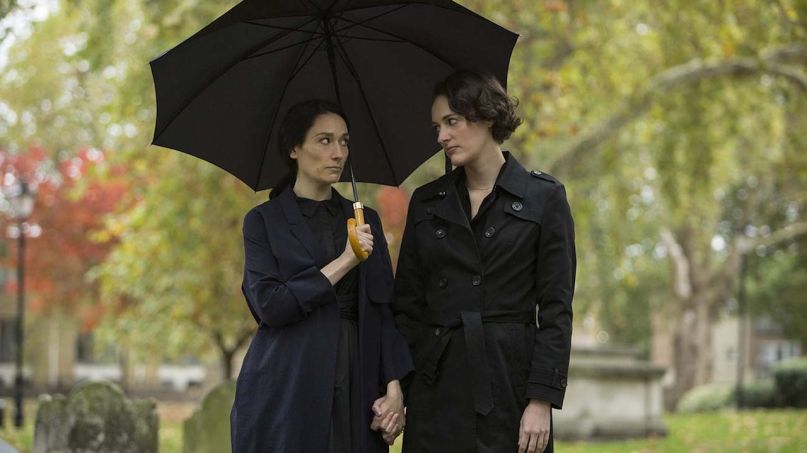 The Pitch: It’s been a year since Fleabag (Phoebe Waller-Bridge), the endlessly sardonic protagonist of the Amazon series in her name, had the big blowout with her sister Claire (Sian Clifford). It was really quite a mess, if you’ll recall. It’s rough when your sister insinuates that sleeping with your best friend’s boyfriend may have been the very thing that killed her. So it makes sense that Fleabag’s been keeping to herself at the good ol’ guinea-pig-themed cafe.

But the second season brings the whole family back together for a truly joyous occasion: Dad (Bill Paterson) is getting remarried, and the series picks up with the engagement celebration at an upscale London restaurant. Needless to say, the family is faring no better. As if the bride-to be Godmother (Olivia Colman) isn’t insufferable enough, Claire’s husband Martin (Brett Gelman) has gone from obnoxious to outright cruel; when one of the sisters miscarries in the restaurant’s bathroom mid-dinnner, he suggests that the kid swam away on purpose.

The only relief to all of the tension is that Dad and his fiancee have invited the family’s priest (Andrew Scott) along, a charming Irish chap who swears like a sailor. It turns how he’s the least offensive of the bunch, and Fleabag even starts to fall for him before the night is over. As the days leading up to the wedding tick down, Fleabag attempts to face down the past, while scrambling toward some kind of a future.

Fleabag in 2019: The first season of Fleabag was largely successful because it pulled off its big reveal — the moment when all the threads of the narrative came together for a momentous punch in the gut — with such disarming perfection. It was something of a revelation that a comedy show based on quick, snarky asides and bracingly sexual humor could also deal in profound emotional impact. The second season sustains that tone, with the series still taking barbed potshots; Claire brags about her lawyer’s high success rate, given that he defends rapists. But the show’s transgression is most apparent in the moments when it takes some of the most taboo gendered topics imaginable and doesn’t make a joke.

Where series like Broad City celebrate the occasional grossness of the female body by making us laugh (Ilana taking a cheese grater to her dry feet, for instance), Fleabag takes a different approach. Amid comedy it deals with the grief of a miscarriage and the unexpected celebration of menopause (through a new friend Fleabag makes) in a way that’s at once casual and poignant. It’s poignant in the way it mimics what real life could and should look like: a woman insists her sister go to the hospital, when all she wants to do is hide her “failure” as a woman; an older woman tells a thirtysomething to celebrate her body’s future changes in a way that feels sacred. Fleabag has a way of handling female pain both with and without punchlines, giving a reprieve from the humor to offer a reminder that what defines women is also what unites them.

About That Fourth Wall: There’s nothing a great many critics hate more than a gimmick for the sake of a gimmick, but what creator/star Phoebe Waller-Bridge does with the typically overused fourth-wall dramatic device throughout Fleabag, especially in the new episodes, is remarkable.

Talking to the camera projects a certain narcissism, but in the first season of Fleabag, the series maximized that trait for both comic effect and character insight. It’s hilarious when a fully capable Waller-Bridge tells us what she’s thinking, and then in the next beat says something entirely different to the person with whom she’s in mid-conversation. That is, until it isn’t. At one point, The Priest (his given name) begins to notice her doing it. He doesn’t hear the words she’s telling the audience, at least not exactly, but he pauses and asks, “Where did you go just now?”

These moments reveal that we’ve been allowed into Fleabag’s life for a purpose, that she’s been breaking the fourth wall as a coping mechanism for grief. She’s lost her best friend. She’s often estranged from her family. We, the audience, are a way for her to avoid total, abject loneliness. It’s hard to imagine a better way to represent being 30 today then a series about slowly losing the relationships that grounded you, while simultaneously uncovering your capacity to make it on your own, as an adult, without the safety nets of parents or siblings or teachers or a fake audience.

Gaining My Religion: The promotional material for the latest season shows Fleabag juxtaposed into a religious Renaissance-style painting, with a guinea pig poised on her angelic shoulder.

Religion, the most unexpected of topics for Fleabag, plays a central role in the new season, another way in which the series breaks with expectations. (Remember that the pilot began with a monologue about hastily preparing for a booty call.) It also delivers one of the most compassionate, nuanced onscreen views of religion in recent memory.

Yes, it’s funny that The Priest seems to be the only one other than Fleabag who’s allergic to the pretense of acting like everything is swell when it’s not. But after the first episode, Scott’s character is fleshed out in unexpected ways, and it comes as a refreshing surprise that the point of his character is not to take cheap shots at the religious. He represents a modern kind of religion, one less concerned with committing to an ascribed set of rules and more concerned with something higher.

The Priest, who happens to be a very attractive and down-to-earth thirtysomething who breaks long-held stereotypes by relating to Fleabag like a normal person, demonstrates a brand of religion that’s not about keeping a tally of wrongs. The presence of his character suggests that what really matters in life is being truly tuned into people, and into yourself. It’s understanding what you really want. It’s about opening yourself up to the vulnerability of being seen and seeing others. It might be exactly what Fleabag needs — not religion, per se, but the feeling of human connection it promises. It’s often the only thing that can jolt us back into the land of the living after a long foray in the cold, despairing wilderness of grief.

The Verdict: Anecdotally, I kept thinking about another female-fronted show while watching this season of Fleabag, from a different streaming service: Netflix’s Russian Doll. What came to mind was the seeming contradiction of critics simultaneously loving the show and expressing trepidation about a second season. It just wrapped things up so well; why ruin that? The same could be said for any admirer of Fleabag, after its first season. Wasn’t the story complete? Where could the show go now?

Where’s It Playing? All six episodes of the second season are now available on Amazon.