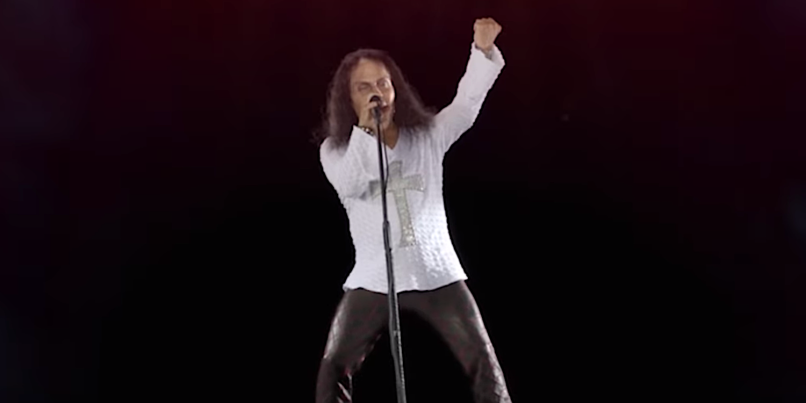 For the better part of a year starting in 2015, Wendy Dio, the widow of legendary rock singer Ronnie James Dio and the keeper of his legacy, and Jeff Pezzuti of technology company Eyellusion were working with their respective teams to bring the late vocalist back to life in the form of a hologram.

Through each step of the process, they were able to view it as simply a job. They could concentrate on the little details of trying to recreate the stage presence of Dio in an animated form and worry over their self-imposed deadlines.

But once they debuted the hologram, onstage at the Wacken Open Air Festival in northern Germany in 2016 and backed up by a live band featuring longtime members of Dio, their natural emotions took over.

“I cried and the record label and everybody I was with cried,” Wendy Dio remembers. “It was so real. But it was really a happy emotion because it’s like Ronnie’s back again.”

That feeling didn’t dissipate through the “Dio Returns” tour that ran through Europe in 2017, and likely will only get stirred up again when a new version of the stage show makes its U.S. debut tonight (May 31st) in Ft. Meyers, Florida, kicking off a month of dates that wrap up in late June in Las Vegas.

The show is a walk through Ronnie James Dio’s long career, touching on tracks from his stints fronting Rainbow and Black Sabbath, as well as plenty of material from his band Dio. Performing alongside the hologram are three members of Dio’s band (guitarist Craig Goldy, drummer Simon Wright, and keyboardist Scott Warren) with Bjorn Englen of tribute act Dio Disciples on bass. In addition to Ronnie James Dio’s recorded vocals, the concerts will also include live singing by onetime Judas Priest member Tim “Ripper” Owens and Lynch Mob singer Oni Logan.

To get a better understanding of how this hologram project came together, we recently spoke with Wendy Dio and Jeff Pezzuti. They told us about the hours of work involved in making this a reality and how they felt about the negative reactions that they received when this tour was announced.

ON HOW THE HOLOGRAM PROJECT GOT STARTED

Wendy Dio: About five years ago, Jeff came to me with the idea of doing a hologram of Ronnie.

Jeff Pezzuti: It was Wendy’s office, 2015. I came with this idea that I’d love to bring Ronnie back to the stage with a live band. Initially, like with any crazy request, she wanted to take a step back, but I showed her how we could do it and we started talking more and more. Before we knew it, we were working on our first project together and debuting it at one of the biggest metal festivals in the world in Germany, the Wacken [Open Air] Music Festival, in front of 75,000 fans. We took it from concept to execution in under a year.

WD: We took that same one over to Europe and did a few shows with that, with great response. But, of course, technology has come a long way since we started. So, this brand new one, which no one has ever seen before… it’s amazing. We’ve been able to do more and more things. It’s an absolutely spectacular show.

JP: Nobody in the U.S. has seen any version of it, so this is the first time that anyone in the U.S. is going to see this. So, that’s really exciting.

ON WHAT FANS CAN EXPECT TO SEE ON THIS TOUR

WD: The hologram show is Ronnie’s vocal taken from several live shows that he did, together with his live band, which are onstage playing live to his recorded tracks. It’s the Dio band that he played with for the last 17 years of his life. We also have two guest vocalists that come in and out with Ronnie: Tim “Ripper” Owens and Oni Logan. They’re great. They sing together with Ronnie or they sing by themselves. It’s an amazing show with lots of effects going on. It’s something that I think Ronnie would be proud of.

ON MAKING SURE EVERY DETAIL WAS CORRECT

WD: I was very, very critical. Even down to making sure they were getting Ronnie’s eyebrows right. We worked on it and worked on it and worked on it. Obviously, I got called all kinds of names from the fans. The point is that everyone has a right to their own opinion and I think they should see it before they criticize it. The more and more we developed it, the more I thought that Ronnie would approve of this. Anyone who saw the show in 1996 on the Sacred Heart tour… we tried to create a hologram then. We did it with rear projection. We had Ronnie’s head in a crystal ball. Ronnie was really interested in holograms. We’d go to Disneyland and he’d love to watch the holograms and see if we could actually make one. I think that Ronnie was an innovator in music, so why not an innovator in technology.

JP: If you look at the history of music, nobody has ever done this. So, Ronnie’s officially the first hologram performer for a live band. That’s nothing they could ever take away. First one ever to tour it with a live band. He’s always been on the innovative side of the music world. This is just taking it to the next level. It really is a celebration of who he was. The show celebrates him throughout his entire career and the entire catalog. Capturing every essence of who he was as a performer. Obviously, hearing that vocal, which is what we all love, loud and clear through the PA with the band playing alongside it, it’s magical by itself. Then add in the visuals and everything else… it really is something. One thing we’ve come to realize is the Ronnie’s voice cannot be duplicated. Nobody sounds like him.

JP: It’s thousands of hours of work to get it right. It’s literally animators making sure that every aspect of his essence and presence and stage performance is captured. People who think this is an easy process, the reason it is not and the reason that what Eyellusion is doing is so different than everybody else is that we take the time to do it. We do it because we’re music fans first and we care about the artists. We care about the legacy. And we are trying to celebrate the artists as if they could possibly be back. At the end of the day, it’s entertainment in its simplest form. But at the same time, it’s such a massive show with all the lighting and visual effects. It’s everything you want in a rock show.

WD: The drummer has to play with a click track, and they have to be exactly on time with every bit that they play. But of course this a very professional band that played with Ronnie for 17 years. They’re really on top of it and they loved Ronnie so much. Everybody wants it to be an amazing show so they all give their heart into everything.

JP: Since the first day, when Wendy introduced them to me… it’s exciting to know that they have remained engaged and excited. We’re really anxious to debut and get this going.

WD: The two singers are not just two singers. Ripper was Ronnie’s protégé and Ronnie wanted me to manage him because, as he told me, “He can do anything I can do with the right training.” He doesn’t sound like Ronnie and doesn’t want to sound like Ronnie. Oni Logan is family. Ronnie’s known him since he was a young kid. And he’s got a different voice than Ripper, more of a bluesy kind of voice. They blend their voices very well, either together with Ronnie or together just the two of them. It’s a fun, fun show of celebrating Ronnie’s life and music.

WD: Not at all because it’s something new and I knew that would come with a lot of negativity. There’s always negativity. It’s always the same when there’s something new. When the CD came out, people were, like, “I don’t know about that.” Or when the cassette came out. But it becomes the norm. The innovators of rock music are all dying off or getting older. What do we have to replace it? We’d love to see all these people back again. Because, quite honestly, after Metallica or Tool, there really isn’t any band I can think of whose music will be remembered and played in 30 years.

JP: It’s true because of all the iconic artists that we’ve grown up with, it doesn’t have the same impact with newer artists now. It’s a shame but it’s true. I think to be able to pass the baton for the artists that are retiring or no longer with us is a big impact for why we’re we even doing this. Ronnie being the iconic vocalist that can never be replaced. When you hear it, it makes a lot of sense for why we’re even doing it, in general.

WD: Ronnie’s been gone nine years and he still has 2.5 million fans on his Facebook. We want to keep his music and his legend alive. And I think this is the way to continue his legacy.

ON WHETHER THERE WILL BE MORE DIO HOLOGRAM TOURS

WD: If it’s what the fans want, then we will continue with it. If they continue to support it, then we we will definitely do it.

ON WHAT OTHER DIO PROJECTS ARE IN THE WORKS

WD: I’ve actually started a documentary. I’ve been interviewing a lot of different producers and directors, and we’re going to get that started in the next few weeks. I’ve started with BMG, who will be releasing a lot of remastered albums of Ronnie’s with bonus tracks on each album. When Ronnie passed, I promised him that I would keep his music alive and I’ll do everything I possibly can to make that happen while I’m alive.

Our thanks to Wendy Dio and Jeff Pezzuti for taking the time to speak with us. Tickets of the “Dio Returns” tour are available here, with dates listed below.