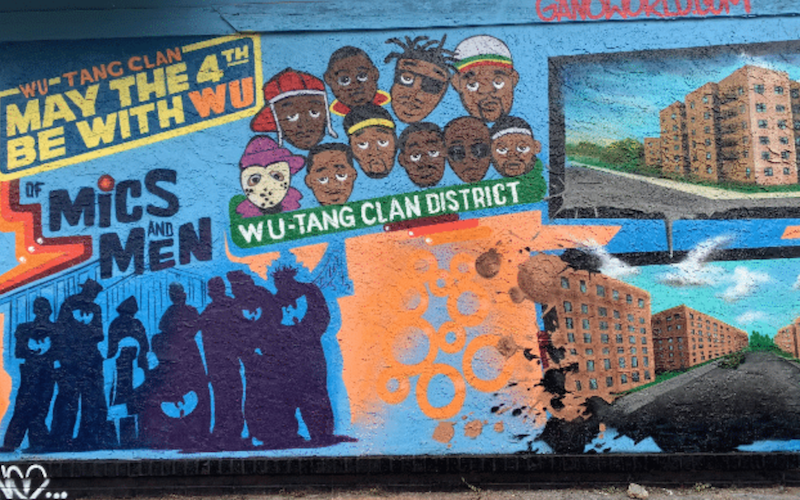 Sesame Street may have gotten an intersection, but the Wu-Tang Clan now have a whole district.

At a ceremony on Saturday, the legendary rappers were honored by having the Park Hill area of Staten Island officially renamed The Wu-Tang Clan District, following a unanimous New York City Council vote back in December. The all-day event was highlighted by the unveiling of a new street sign at the corner of Targee Street and Vanderbilt Avenue.


As the Staten Island Advance reported, Councilwoman Debi Rose was on hand during the event. “This is a great day where we have an opportunity to honor our own hometown heroes, the young men who put Staten Island on the map internationally,” she said. “They overcame all types of challenges, to not only become rap artist and hip-hop artist but to inspire and challenge the music world.”

A number of Wu-Tang members were present for the celebration, including Raekwon, who shared a Facebook Live stream of the sign reveal. In keeping with the “Wu-Tang is for the children” mantra, the event also featured activities like bounce houses, face painting, rock climbing, raffles, and more. See clips and images from the day below.

The dedication comes amidst Wu-Tang Clans’ 25th anniversary, which they’re celebrating with a slew of reunion tour dates. Get tickets here.

Thank you to all from near and far who joined us today to official create the Wu-Tang Clan District here in ParkHill / Stapleton. @WuTangClan #WuTangClanDistrict pic.twitter.com/48DMzqEESg