Miley Cyrus Finally Seems Comfortable on the She Is Coming EP 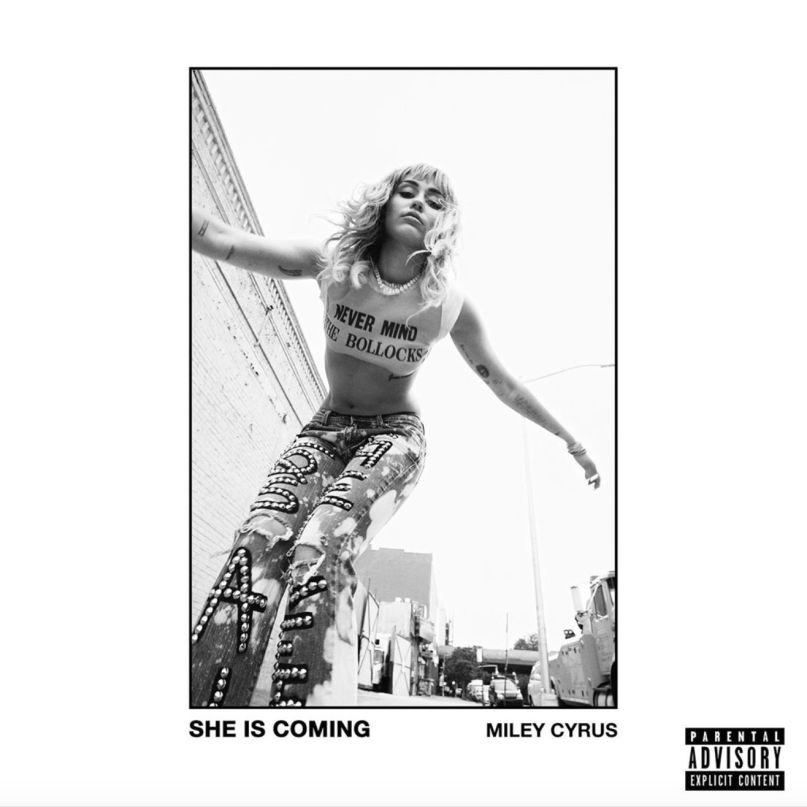 The Lowdown: At 26, Miley Cyrus has been famous for about half her life, and for much of that time she’s been publicly wrestling with her identity. Hannah Montana was a sweet first gig, but the Disney code of conduct gave Cyrus a toothache. She’s been courting sexy controversies across her young career ever since, starting with 2010’s Can’t Be Tamed and pushing the envelope for 2013’s Bangerz. In 2015, she released a free album called Miley Cyrus and Her Dead Petz. The sex- and drug-inflected collaboration was written with The Flaming Lips and featured a mix of psychedelic pop, raunchy spoken word, and unlistenable experimentation. At the time, Cyrus sounded far away from Walt Disney and dangerously close to Betty Ford.

Well that, too, passed, and Cyrus was ready for a career reset. In 2017, she released the country-tinged Younger Now. The name said it all: Cyrus was attempting to grow down, Benjamin Button style, and re-brand for a younger crowd. This made some sense; pop stars get older, but the core audience stays the same age. However, the results were disjointed and insincere. It seems Cyrus herself wasn’t happy with the direction and has hit the reset once again.

At only six tracks and running less than 20 minutes, She Is Coming is the first part of a planned trilogy, the rest being She Is Here and She Is Everything. These EPs will later be repackaged, predictably, as She Is Miley Cyrus. What’s less predictable is the sound. Cyrus has carved out fresh pop real estate for herself, somewhere between Pink, The Weeknd, and the country dress-up of Lady Gaga. The individual songs are never far from radio mainstream, but Cyrus shows good taste in collaborators and a fresh sense of identity. She’s had successes before. But never rarely the successes felt so natural.

The Good: Method Man said, “Cash rules everything around me,” on the seminal Wu-Tang song “C.R.E.A.M.”. Well, times have changed and Cyrus has never wanted for money, so it’s no surprise that she feels ruled by other forces. “Wake up with new tattoos on my body,” she murmurs on “D.R.E.A.M.”. “Drugs rule everything around me.” The track is produced by Wu-Tang mastermind RZA, and compared to her previous songs about inebriation, the tone is darker, less celebratory.

Even “Party Up the Street” isn’t a pure party song. Cyrus re-teams with Mike Will Made It and joins forces with Swae Lee for the first time to make some silky and luxurious music. “Party Up the Street” is set before the party starts, in a moment of anticipation. Swae Lee’s angelic tenor is a great contrast for Cyrus’ smoker’s soprano.

The collaborators are consistently interesting, but the most audacious duet is “Cattitude”, featuring RuPaul. The Drag Race star is not known as a rapper, but she has a discography twice as long as Miley Cyrus that goes back to 1993. Here she spits rhymes about her power and her pussy. The song is relentless, almost off-putting. The charisma of the stars keeps it afloat.

“Mother’s Daughter” and “Unholy” are sassy, catchy fun, though the “Don’t mess with me!” messages aren’t the most original. Come to think of it, none of the songs are what you’d call innovative. But the execution is skilled, and six songs is long enough to create an emotional arc. The EP reaches its climax with “The Most”, a song about putting your loved ones through hell that could be read as an apology to Cyrus’ parents. She works with Mark Ronson, most famous for “Uptown Funk”, but the song is reminiscent of his countrified collaborations with Lady Gaga on Joanne. Cyrus uses her Nashville twang and smoker’s rasp to startling effect. “The Most” is painful and thrilling.

The Bad: When cooking with, “C.R.E.A.M.” it’s only polite to invite Wu-Tang to dinner. Unfortunately, Ghostface Killah shows up in what Jalen Rose calls “keep getting them checks!” mode. He stumbles drunkenly around the beat and doesn’t find a groove until the song is almost over. It’s one of the worst guest verses of the year. Luckily, this is one of the few total missteps on She Is Coming, although with a running time as short as this one, a single bad verse takes up a lot of space. For the most part, it’s an EP of old ideas dusted off and executed well.

The Verdict: She Is Coming is an unfinished project, and it’ll be easier to digest these songs in the context of the rest of the trilogy. But for now, Cyrus has managed to express her occasionally divergent personalities in a cohesive way. The polished pop of Can’t Be Tamed and Bangerz sits comfortably alongside the softer country of Younger Now and the druggy glamour of …And Her Dead Petz. Miley Cyrus hasn’t sounded this comfortable since Hannah Montana, when she was an actress playing a character pretending to be something she wasn’t. She Is Coming is quite listenable and occasionally thrilling. This project might not turn out to be an important moment in pop music, but it is definitely an important moment in the growth of Miley Cyrus.

Essential Tracks: “The Most” and “Party Up the Street”