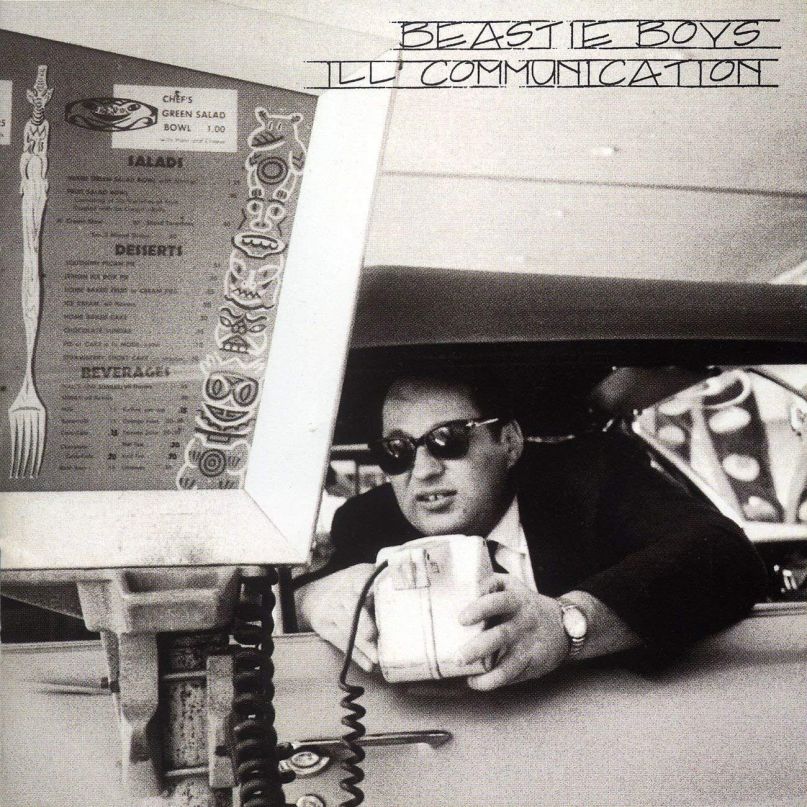 While many bands would have phoned it in and took the money train straight to the vault by doubling down on being the fun and wacky “Fight for Your Right” guys, the Beastie Boys took a hard left. Instead of writing a series of lame party records or rehashing the awful song “Girls”, the group dove deeper into hip-hop’s evolving culture while never losing their thirst for punk rock. The result is a body of work that people from all corners of the musical world consider genre classics. The later stuff can be hit or miss, but it’s safe to say the golden era of Beastie Boys — the trifecta of Paul’s Boutique, Check Your Head, and finally Ill Communication — remains unfuckwithable.

Paul’s Boutique and Check Your Head are masterpieces, but the odd-duck brilliance of Ill Communication has also stood the test of time and frequently been considered one of the best records of the ’90s by magazines like NME, Rolling Stone, and Spin. And after having it in our lives for the last 25 years, it hasn’t lost a drop of vitality; if anything, Ill Communication has gotten better: the songs offer deep grooves and a dizzying array of instrumental moments that only serious craftsman could have dreamed up. And we all know the Spike Jonze-directed “Sabotage” video with police shtick and fake mustaches.

On Check Your Head, the group hinted that they were moving beyond samples with songs like “Gratitude” (an amazing tribute to Pink Floyd’s “Echoes”) and “Something’s Gotta Give”, but on Ill Communication, it was apparent that writing for the record rather than only working with a DJ was the group’s stylistic focus.

What many people still don’t realize is that the Beastie Boys’ earliest incarnation was as a hardcore band, having grown up at legendary New York City spots like Max’s Kansas City and CBGBs, catching shows by bands like Ramones and Minor Threat. There’s a heartbeat of hardcore throughout the Beastie Boys; even on “Sabotage”, you can hear the influence on three guys who cut their teeth on bands like Fear and Black Flag. Tracks like “Heart Attack Man” and “Tough Guy” showcase the Beastie Boys’ ability to hammer out a few songs with that old zest.

However, the real standout moments throughout Ill Communication are the groove-soaked interludes like “Sabrosa” and “Futterman’s Rule” while “Eugene’s Lament” is otherworldly and feels straight from the dark shadows of a David Lynch film. (Beastie Boys would go on to write two instrumental albums: The In Sound from Way Out! two years later in 1996 and The Mix-Up in 2007.)

Put aside the radio hits like “Sure Shot” and “Root Down” and what’s left is groove-drenched brilliance. “B-Boys Makin’ with the Freak Freak” is a patchwork of breakbeats that could blow out even the best stereos. “Get It Together” features A Tribe Called Quest’s Q-Tip and is a significant highlight of the record, showing how all three members of the Beasties could keep up with one of the greatest emcees of all time who could have run circles around just about anyone else. The result of “Get It Together” is a textured cocktail of funky soul hip-hop that’s unrelenting and overflowing with deep-cut samples from artists like James Brown, Biz Markie, and Fred Wesley.

Ill Communication has not one but two songs that use a flute for the leading hook, with “Sure Shot” and “Flute Loop”. They also use Mongolian throat singing as a backbeat that eventually turns into “Bodhisattva Vow”, which finds the three trading verses about their developing relationship with Buddhism. Later, the Beastie Boys, most notably MCA, would go on to throw one of the 1990’s biggest musical events, The Tibetan Freedom concert. MCA would be a practicing Buddhist up until his untimely death in 2012.

The legacy of the Beastie Boys is timeless. They’re one of the rare bands that transcend style and musicality, finding universal love from backpack hip-hop kids to popped-collar bros and everyone between. The body of work they’ve left us with is a testament to experimentation, social awareness, and personal growth. Ill Communication is the exclamation point to that career.

Hop over to your local record store, and grab a copy on vinyl. You’ll be dancing to the flute solos all over again.