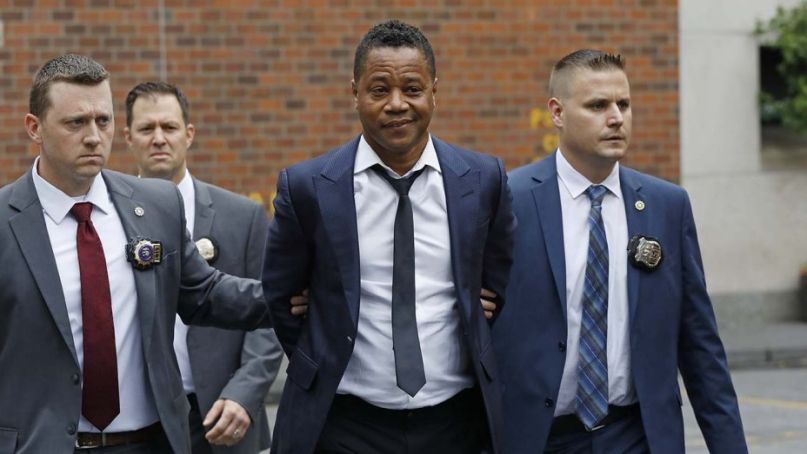 Cuba Gooding Jr. surrendered to NYPD’s Special Victim Units on Thursday and was charged with one count of forcible touching, a misdemeanor offense, according to the Los Angeles Times. If found guilty, he faces up to a year in prison.

The Oscar-winning actor is accused of groping a woman at the Magic Hour Rooftop Bar & Lounge in Manhattan on Sunday evening.

In video surveillance footage of the alleged incident (via TMZ), Gooding can be seen putting his hand on the woman’s leg and later on her breast. In a second clip, the woman confronts Gooding before security intervenes.

In an interview with the Los Angeles Times, Gooding’s lawyer, Mark J. Heller, denied the allegation. “We have reviewed almost two hours of tapes, and we do not see any criminal conduct having been perpetrated on his part,” Heller told the Times.

Heller acknowledged that his client is “very, very outgoing. He’s very friendly. He’s very jovial. I guess the word is, sometimes he’s frisky but he’s not inappropriate.” However, Heller added that “[Gooding] respects women. I’ve known him for over 30 years, never been charged or convicted of any crimes… I don’t think it’s going to create any pattern or affect his case.”

In an interview with TMZ filmed prior to today’s arrest, Gooding maintained his innocence. “I trust the system and the process,” he said. “There’s a tape that shows what really happened. That’s the most important thing.”’

NYPD detectives say they’re also investigating allegations brought forth by a second woman, who accuses Gooding of groping her at a New York City restaurant in 2008.