For its other romances, Emma Thompson and Mindy Kaling are the key pair in this comedy 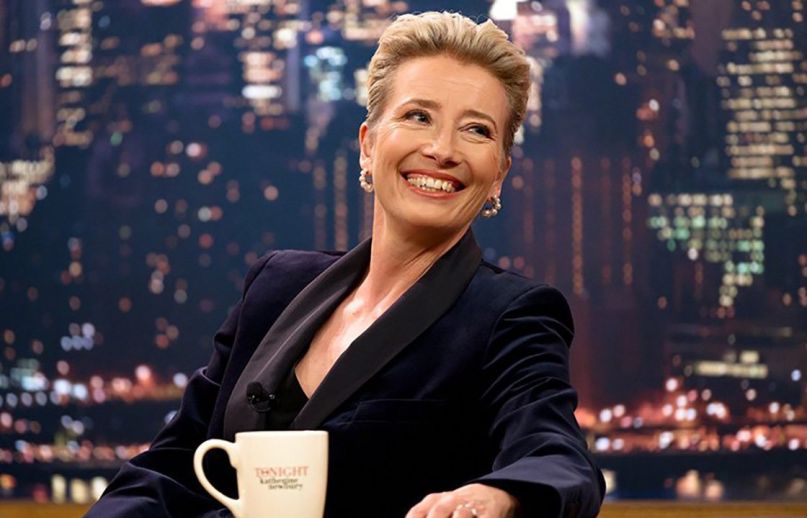 The Pitch: Katherine Newbury (Emma Thompson) is a legend. Somehow, despite being a comedian and a woman at the same time, she became the host of a major American late night program, an institution starring in an institution. Yet it seems as though her trailblazing days are far behind her, and along the way, she seems to have forgotten how to be a decent boss. (It’s entirely possible she never knew how to pull that off.) But when firing one of her staffers for asking for a raise and citing his wife giving birth as the reason, the man in question lets loose with a stream of not-entirely-wrong insults, including her lack of relevance, general complacency, and oh yes, that she hates women.

Katherine dismisses this until producer Brad (Denis O’Hare) confirms that maybe she does have something of a problem with women, given her all-male writers’ room and attitude toward the few women who’ve worked for her over the years. Brad’s given a mission: Hire a female writer. Enter Molly Patel (Mindy Kaling, also the screenwriter), a comedy enthusiast who works at a chemical plant and only landed an interview through the savvy gaming of a contest at work that allowed her to meet an executive. Despite Molly’s womanhood, it doesn’t go well, until a well-timed, sharp-edged joke reverses her fortunes. But Molly’s earnestness, unconventional work experience, and kind-but-blunt nature put her at odds with the other writers, and certainly with Katherine, who doesn’t respond well to being told what she’s doing wrong, no matter how true the observations are. Both have to navigate a new, particularly thorny landscape, pushing against what’s holding them back, even — and perhaps especially — when what’s holding them back is themselves.

What If a Workplace Comedy Was a Totally Professional Rom-Com? Mindy Kaling seems to have decided to answer that question. The answer is, “If the film in question is Late Night, it’s good.” Kaling, who honed her romantic comedy chops on six seasons of The Mindy Project, certainly writes love interests into the story — a few prospects for Molly, a cherished, ill husband (John Lithgow) for Katherine; the latter is vital to the film’s success, while Molly’s potential paramours could be taken or left. But none of that rom- in rom-com is the rom- that matters. That distinction belongs to Molly and Katherine themselves.

Much of that is due to Kaling and Thompson’s terrific chemistry — from the earliest moments, you just want these two crazy kids to work it out, in a strictly platonic and professional sense. Some credit is due to the performers as individuals; Thompson in particular gives a lively, surprising, and funny but deeply felt performance. Yet Late Night mostly feels like a romantic comedy because Kaling writes it that way. These are two people who you sense have a real need for each other, who can make each other better, and who butt heads in exactly the way two fiery wits would in a more traditionally “romantic” rom-com. By the time Katherine gets her first big gesture moment — though not her last — Late Night has embraced and upended the tropes of the genre by situating it as a romance between employee and boss, one totally devoid of actual romantic love. At least in that part of the story.

Not Subtle, Until It Is: When Molly arrives for her interview, someone else is there for the same position: A fresh-faced twentysomething white dude, who ran straight out of the Ivy League into the arms of his older brother Tom (Reid Scott). Tom is the show’s monologue writer, a fact he brings up as often as he possibly can, and he’s not happy when Molly is ultimately hired instead of his sibling, tossing around complaints about diversity hires and how hard it is to be a straight white guy with the reckless abandon that can only come from being a straight white guy. Tom is not subtle, and neither is this corner of the film’s story. We see no others interview — not other women, not men who aren’t the brothers of current writers, just those two. One’s an insider, one’s an outsider, and the insiders can’t imagine that the outsider actually deserves to be there.

Yet whenever Tom steps out of the picture (and while Scott does his best to make Tom appealing, he doesn’t step out of the picture nearly often enough), things grow more complex, and this “#MeToo” comedy (as it’s been called) actually starts to engage with modern issues in a more meaningful way. That’s particularly true in the last act of Katherine’s arc, which deals with double-standards and decency with a level of thoughtfulness rarely afforded to such stories. But Molly’s trajectory grows more interesting as well. Kaling’s script is so warm and effervescent that it’s easy to miss how subtly surprising it can be, nearly always adding a little twist or wrinkle to the mix, even when dealing with themes as broad as “kindness is good” or “comedy has to be honest”.

But seriously, folks, Nisha Ganatra’s direction captures all the Fallon-esque gloss when the time comes, giving every segment that takes place in the show or on its set the beaming brightness designed to keep viewers alert at 11 p.m. (or, alternately, to grab their attention as they scroll past videos on their phones). It never feels as though we’re watching it on TV, but rather that we’re somehow stepping inside the TV to live in the room. It results in a kind of charge that may be similar to what Molly experiences every time she steps onto that stage; when the camera leaves that world behind to head to Katherine’s exquisite, dark but warmly-lit home, or the fluorescent lights of the office, the change is striking. It’s film direction as the answer to the question, “Why would Molly put up with this?” Because it feels incredible, that’s why. Even when the jokes are bad.

The Verdict: This isn’t a perfect film, and its issues aren’t exactly hard to spot. For just one example, outside of Katherine, Molly, Katherine’s husband, an executive played by Amy Ryan, and a childish, petulant comedian (Ike Barinholtz) set to be Katherine’s successor, no character is particularly memorable or well-developed. (Hey, five ain’t bad.) Yet Late Night is one of those films that has perhaps the most valuable of all qualities: It’s winning enough that you can spot its flaws and still don’t really care. Much of that is due to Kaling’s script, and particularly her writing for Thompson, who gets a role worthy of her dramatic talents, and her oft-underused expert timing.

It’s a hell of a part in a charmer of a movie, one made by a writer writing for herself and another writer, both of whom play characters who also write, and as such, the words positively sparkle. That’s all one really needs from a movie in order to fall in love; it’s also fundamental in getting a joke to land. Sometimes, it’s even all you need to see someone for who they are, deep down.

Where’s It Playing? Limited release, with a wider rollout to follow in the coming weeks.