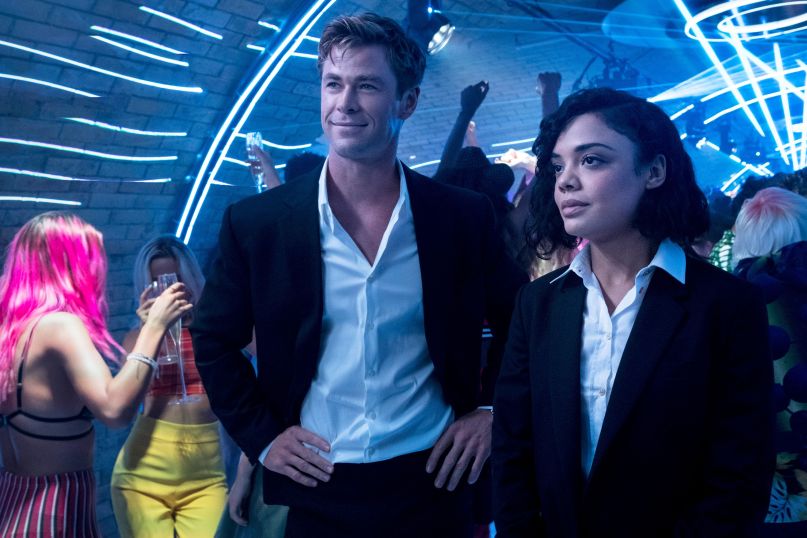 The Pitch: After saving an alien creature and watching her parents’ memories be wiped by the Men in Black as a child, Molly (Tessa Thompson) spends her adult life working to uncover and join the secretive organization. After tracking them to their New York City headquarters, she manages to impress Agent O (Emma Thompson), and talks her way into becoming a probationary agent.

O assigns Molly the pseudonym Agent M, and assigns her to the UK branch. In London, M is paired with Agent H (Chris Hemsworth), as the duo unwittingly stumble onto a plot by the Borg-esque “Hive,” who assimilate the creatures they destroy in order to steal a super-weapon. The plot thickens when M and H suspect they’re being assisted by a mole within the MiB.

Fairly Friendly for New Fans, or Those Who’ve Been Neuralyzed: In a way, Men in Black: International is less of a sequel and more of a spin-off. F. Gary Gray takes over the director’s chair from Barry Sonnenfeld, and plays in the same world as the original films. So, as expected, there are many callbacks: Frank the Pug/Agent F returns for a few laughs, Thompson’s aforementioned Agent O pops up once again, and there’s even a painting memorializing the climax of the first film, featuring the likenesses of Agent K (Tommy Lee Jones) and Agent J (Will Smith).

Despite this continuity, however, International works more like a reboot, and the film even uses many of the same plot points as the 1997 original. Similar to Agent J, Agent M is a rookie agent being introduced to the Men In Black organization, and the audience is introduced to a much larger world through her eyes. Those similarities expand into their respective interactions and gags, from discovering a dying alien that gives the agents a McGuffin of immense power, to the two agents leaning on tabloids once again in order to track alien movements.

The major difference, however, is that Hemsworth’s Agent H isn’t exactly Jones’ Agent K. As such, we don’t have someone leading M (and the audience) through the intricacies of the series’ world. Instead, International assumes that viewers already have a rudimentary understanding of the premise of the series and the overall scope of its mythology. Having said that, it’s not like you need to go rent or pull up the first three movies prior to viewing. The film gives you just enough broad strokes to get you through the proceedings.

New Tone for New Agents: The first three films, while action-packed, matched the general tone of police procedurals. In the original film, J and K tracked down various clues to work out the location of “The Galaxy.” In International, the plot is structured more like that of a spy thriller. The massively powerful weapon is handed to M early on, and even when it’s inevitably stolen, they know exactly who has it and where.

Rather than focusing on the mystery, the film prioritizes its game of cat-and-mouse. This sends the two leads across the globe to lush locales: New York City, London, Paris, Marrakesh, and Italy. Seeing how the originals took place in and around the New York area, it’s refreshing to get outside the concrete jungle, and the film capitalizes on the change with plenty of high-speed chases and large-scale battles.

Action abounds in this film, and serves as smoke and mirrors for the greater mystery at hand. Multiple characters have unclear motivations, and dole out inconsistent information to keep the audience engaged and intrigued. Granted, this is the formula for every spy movie, but it’s a welcome pivot for a franchise that didn’t really need to run through another procedural.

Opening Up the World, But Not the World Building: Leaping between various locations makes for beautiful scenery, but the world often feels skin-deep. Much of this has to do with that pivot away from the procedural nature of the original trilogy. Part of the allure of those investigations laid in watching J and K interrogate aliens, which demonstrated the ways that aliens have integrated into society. International treats the aliens more like setpieces, keeping them far more isolated from humans. In Marrakesh, for instance, M remarks that they’re entering a sanctioned area for aliens, while the club they later visit in London has a secret entrance for the aliens to dance and drink without disguises once inside.

The film also doesn’t spend nearly as much time with the villains. In the first three films, audiences were afforded a number of scenes with the alien antagonists going about their deeds by their lonesome. This time around, the Hive’s M.O. is frustratingly glossed over within the dialogue, and while it can be ascertained that they’re an ominous collective being, the threat they pose to the galaxy as a whole is left to be inferred by the viewer. Keeping the Hive mysterious is part of the plot, sure, but a little more elaboration would have been ideal.

Not So Odd Couple: So much of International leans on the human characters, and Thompson and Hemsworth really carry its weight. The two ooze with chemistry, and part of their charm stems from the fact that neither plays it straight. Yes, Thompson’s M is more dedicated and serious than Hemsworth’s H, but she’s still vibrant and fun in her own right. Unlike Jones’ curmudgeonly persona, M is giddy at the prospect of being an agent, and is thrilled to be part of the world. Hemsworth, meanwhile, plays H much like FX’s Archer: arrogant yet strangely competent. Unsurprisingly, his sex appeal is played up throughout the movie, as both human and alien women throw themselves at him.

That’s why the inclusion of a “cutesy” alien just feels like a cynical appeal to younger viewers. Midway through the movie, H and M meet a victim of the antagonists, a minuscule soldier who failed to protect his queen (Kumail Nanjiani). They dub their new companion “Pawny” (because he was a “pawn” for his queen — get it?), and he joins them on their quest, providing sassy quips and pop culture references. To be fair, Pawny isn’t exactly the most annoying comic relief a studio tentpole could have tried to wedge in, but with no straight person to balance out the trio, it’s just comic overkill.

Elsewhere, Thompson gives a dry performance as Agent O; Liam Neeson acts fatherly as the ridiculously named “High T,” the superior officer at the London MiB office; and Rafe Spall plays the rigid Agent C, who begrudges H’s disregard for protocol, and wants more recognition for his contributions. For a film with so much action at hand, Spall and Neeson help keep the office drama alive, and their subtle performances gas the ensuing mystery that lingers behind the razzle and dazzle.

The Verdict: It’s been 22 years since the original Men In Black conquered movie theaters and airwaves. (Sadly, this entry doesn’t include a tie-in song. Very unfortunate.) It’s doubtful International will reclaim that type of spotlight in the public consciousness, but Gray was at least able to offer up a duo that’s just as engaging and charming as Jones and Smith. Their charm, though, can only do so much lifting in a film that falls short just about everywhere else, be it in story, stakes, or world-building. Sure, it’s a thrilling ride, but it’s also as memorable as a 75-second roller coaster.