"Old Town Road" is the meme that continues to give 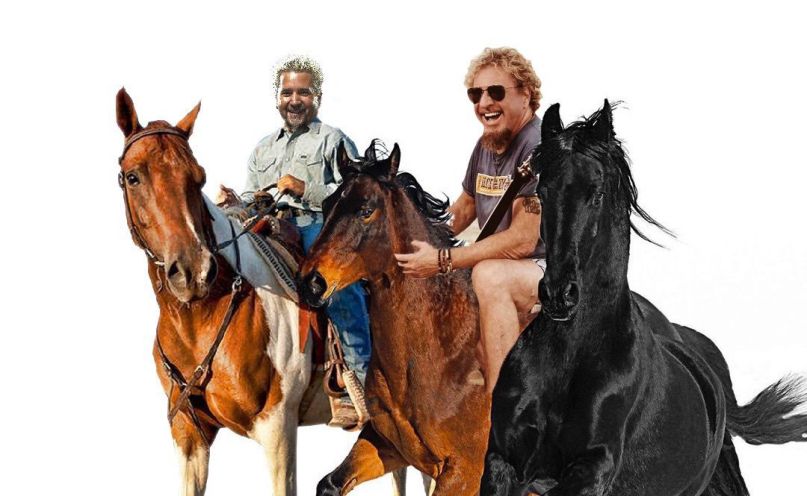 Lil Nas X has proven himself as an absolute gem since he grabbed the spotlight a few months ago with his wildly successful collaboration with Billy Ray Cyrus, “Old Town Road”. Now, the king of Flavortown, Guy Fieri, has reached out for his own remix.

There’s no doubt that Nas X is a connoisseur of memes. His Twitter feed is a mix of self-aware, ongoing joke about how much he wants his new EP to exclusively feature “Old Town Road” remixes, plus wholesome interactions with other celebrities, fans, and sometimes gaggles of smitten school children. So, when Fieri hit him up about a remix, it checked all the boxes, and almost exactly three hours later, Lil Nas X responded, “it’s never too late for u legend.”

it’s never too late for u legend https://t.co/oqTlRvf9zt

Later, Sammy Hagar chimed in, adding “Looks like there’s room on that horse for one more rider to Flavor Town Road, @Guy Fieri and @LilNasX – count me in.” He paired his solicitation with a newly rendered graphic featuring him riding the middle horse, and we can only hope that a third guest rider is on the way.

Looks like there’s room on that horse for one more rider to Flavor Town Road, @GuyFieri and @LilNasX – count me in. pic.twitter.com/a7bf6lly6z

However, predictably, Guy Fieri ultimately ended the interaction in a cringe-y fashion, pushing the joke on longer than anyone would have liked. He followed up by sending another photoshop for potential artwork for “Panini”, a track that will appear on the rapper’s debut collection. He asked “Maybe we should drop Panini before we take a trip to Flavortown,” to which the hitmaker didn’t respond.

Maybe we should drop Panini before we take a trip to Flavortown @LilNasX? https://t.co/Lu2nMS8Rmt pic.twitter.com/85fXX51aWx

Lil Nas X’s extended EP, 7, is due out later this month. In addition to his smash hit “Old Town Road”, the album will include a collaboration with OneRepublic’s Ryan Tedder and five other solo tracks.

Previous Story
New Clarence Clemons documentary, Who Do I Think I Am?, due out in August
Next Story
Elvis Costello accepts O.B.E. from Queen of England: “My mom told me to do it”
Popular
More Stories
[fu-upload-form form_layout="media" title="Submit Your Photo"][input type="hidden" name="ugc" value="1"][/fu-upload-form]