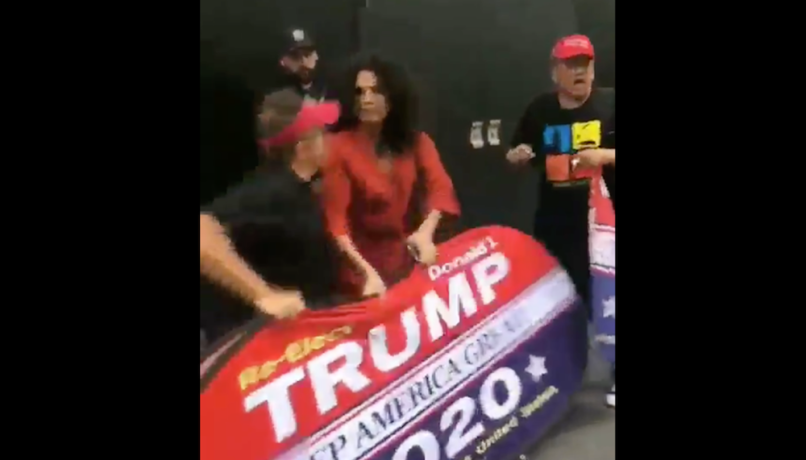 Donald Trump’s administration is doing just about everything it can to erase and delegitimize the transgender community. Since occupying the White House, he and his conservative lackeys have pushed to ban transgender people from the military, kick them out of youth shelters, and refuse them access to appropriate healthcare.

So, what happens when a transgender person and an aggressive Trump 2020 supporter confront one another? Well, let’s just say diplomacy is not in the cards.

As TMZ points out, transgender Pose star Indya Moore (they/them pronouns) and a Trump loyalist named Dion Cini got tangled up in a fight in New York over the weekend.

Moore instigated the incident by first stepping on Cini’s “Re-elect Trump” sign. Cini then intervened and the two had a brief tug-of-war over the poster.

However, what started out as a scrappy scuffle eventually escalated. Cini went on to exert tougher physical force against Moore and another person, shoving them hard on more than one occasion. Moore fought back by knocking Cini’s MAGA hat off before police finally got involved.

@IndyaMoore out here doing what leftists do! So he can’t be a fan of your show and support the president at the same time? #whatajoke #Trump2020 pic.twitter.com/ACvWh5uy3U

Dion told TMZ that he filed a police report for larceny, saying that Moore attempted to steal his $250 sign. Fellow Trump supporters championed Dion’s violent actions on social media, many of them purposefully misgendering Moore and directing transphobic comments their way. This is hardly Cini’s first run-in with cops; his aggressive pro-Trump behavior has actually gotten him banned from Disney World for life.

Moore later took to Twitter to thank supporters of the trans community. “Thank you for loving my community, fighting for us, supporting us fight for ourselves and others who are experiencing an increase of oppression and violence under this current administration.”

Thank you for loving my community, fighting for us, supporting us fight for ourselves and others who are experiencing an increase of oppression and violence under this current administration.