Joe Perry on The Hollywood Vampires, the “Outsider” Johnny Depp, and the “True Pioneer” Alice Cooper 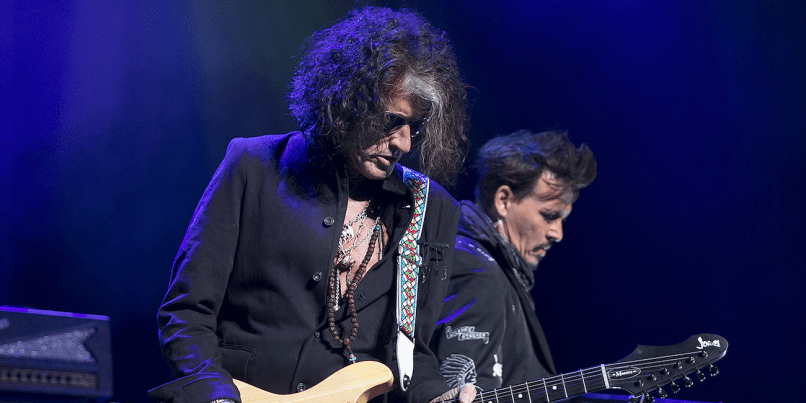 The Hollywood Vampires' Joe Perry at the Warfield Theatre, photo by Raymond Ahner

As opposed to their 2015 self-titled debut album, which was comprised of mostly cover songs, Rise is made up of mostly original tunes, with only three cover songs included in the tracklist.

We recently caught up with Joe Perry, who discussed the new album and the band dynamics, including what impresses him most about his famous bandmates.

The legendary guitarist also talked about fellow Rock and Roll Hall of Famer Jeff Beck, who guests on the track “Welcome to Bushwackers”, as well as his decision to sing lead on the band’s cover of Johnny Thunders’ “You Can’t Put Your Arms Around a Memory”.

Pick up Hollywood Vampires’ new album, Rise, at this location, and read our interview with Joe Perry below.

On whether The Hollywood Vampires felt more like a full-on band this time, as opposed to a “supergroup”

I know that looking at the lineup, in some ways you could say it’s definitely a supergroup project. When the first record was done, we had a lot of famous heavy hitters on the record helping to flesh it out, which I think was appropriate for that kind of a record. We were paying homage to so many great talented people who wrote so many great songs. I felt like they came alive every time we played them. So, having other people come in, it really made sense.

But with this record, this lineup toured together, and actually we played a couple of the new songs off the album in Europe and they were pretty well received. One thing that made it different than just a couple of guys going in and throwing down was Tommy Henriksen, who is Alice’s guitar player … not only were we all co-writers, but he has a unique talent to sing like Alice — he can sound like Alice when he wants to. And, he’s played with him a long time and he’s a good singer in his own right, and he can kind of imitate Alice.

So when we’d write some of these songs, when it came time to try out some of the melodies and some of the lyrics, he was able to throw that down, too. We were sending tapes to Alice all the time to hear where things were at and he would adjust some lyrics here and there, and the thing just came together.

There’s certain parts of the lyrics that really touch home, but the main thing to me is that I miss Johnny. He passed away way to early… When Aerosmith went to New York and got signed, [Thunders’ band The New York Dolls] were signed to the same management company a week earlier. So we kind of came up together in those early months. I always saw them as kind of like our New York brothers, and I’m still friends with [singer] David Johansen, and he actually sang on my last solo record. Johnny was a good friend, but he had another path, and unfortunately he left too soon, so I really felt it was appropriate for me to sing that song.

On fellow guitar legend Jeff Beck, who guests on the track “Welcome to Bushwackers”

One thing I’ve always liked about Jeff was he was his own man in the business. His early career, he really cut his teeth in the Yardbirds and was a good friend of Jimmy Page’s. And they put their heads together early on, but the bullets went in different directions. Jeff really had an issue with lead singers and decided, “F*ck it, I’m just going to go out there and make the guitar do the talking.” He’s one of the few, if not the only guitar player, that’s constantly pushing the edge, even now.

On bandmate Johnny Depp, and what people may not realize about him as a musician

I think that if he had his druthers, he would rather be a rock star — not a rock star in the sense of being famous as a rock star, but having that as his gig. I’m not sure if he’s so enamored with the fame. He certainly has the drive and the chops to do it. If people know anything about Johnny, he did go to California with his band to try and make it, and he just kind of fell into the acting thing, and discovered he had this incredible talent and really used it. I mean obviously I know him pretty well, and I know he really respects that talent, and he really gives it all he’s got. But he really is an outsider, as far as that goes. He just found his own path.

But he’s a musician from the word “go.” I’ve never met any actors through him. I’ve met musicians through him — plenty of them — but no actors. And you know, walking through his place, he’s got a studio in the living room and guitars hanging on the walls. When I met him, we became pretty fast friends.

On bandmate Alice Cooper, and what he’s admired about him throughout the years

One of the things that’s impressed me the most about Alice, from the early days to now, even when he takes on the Alice Cooper persona, he’s a rocker. The music, from the first record on, you didn’t have to have all the theater that he was a pioneer with — there’s a lot of bands that were influenced by him over the years, without a doubt. The thing is he also made sure that the music held up. You didn’t have to see the show to like an Alice Cooper record. On its own, it’s the real deal. So, that’s one of the things I admire about him.

He’s got the ability to perform and write some really heavy rock stuff, and they’re great songs. Some of my favorite songs to play live are “I’m Eighteen” and “School’s Out” — just great riffs. But when he was coming up and putting on those kinds of shows, I’d never seen anything like that — I mean, when [he was] 18 years old. Nobody’s done anything like that. He’s a true pioneer.

On whether Hollywood Vampires plan to schedule more shows this year

It may be tough to get anything done before the year’s out, when you look at people’s schedules, but next year we’re hoping to put a real tour together.

Our thanks to Joe Perry for taking the time to speak with us. The Hollywood Vampires’ new album, Rise, is available here.