Marilyn Manson belongs with Taylor Swift, is a sucker for Joe Jonas: Photos

The Antichrist Superstar posed with the pop superstars at an L.A. radio festival 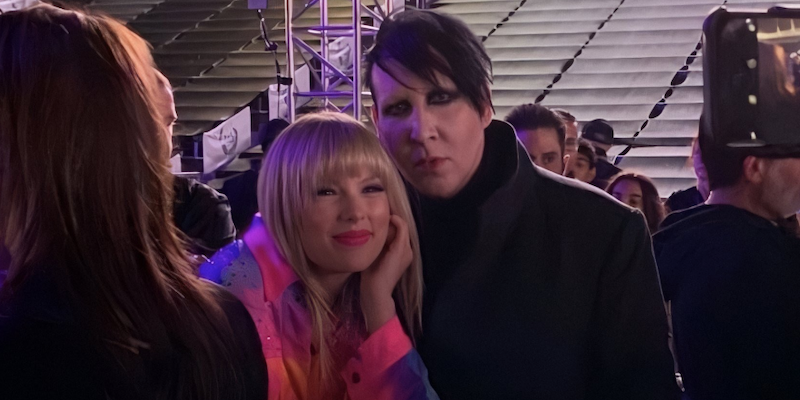 The Antichrist Superstar is now mingling with pop royalty, as Marilyn Manson was seen rubbing elbows with pop stars Taylor Swift and Joe Jonas at the Wango Tango radio festival in Los Angeles over the weekend.

Photos popped up on Twitter of Manson with his arm around Swift, as the shock rocker delivers a death stare into the camera and the pop star hams it up with a wide-open smile.


Meanwhile, Manson also found himself with his arm around Joe Jonas, of the recently re-formed Jonas Brothers, alongside American Idol host Ryan Seacrest, as well. Jonas himself tweeted the photo, with the caption, “Hi we are the Jonas Brothers! And you’re watching Disney Channel!”

When he’s not hanging out with “the beautiful people”, Manson is working on a new album. He’s also set to hit the road with Rob Zombie on the “Twins of Evil: Hell Never Dies” tour this summer. Tickets for the tour can be found here.

Hi we are the Jonas Brothers! And you’re watching Disney Channel! pic.twitter.com/rqAMaObFzX