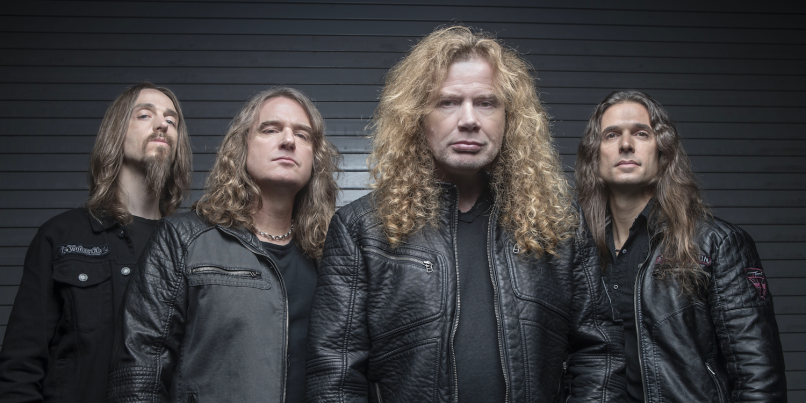 Following yesterday’s announcement that Dave Mustaine of Megadeth has been diagnosed with throat cancer, bassist David Ellefson spoke with The Classic Metal Show, discussing the future of the band, Mustaine’s treatment, and the status of his longtime bandmate.

“We were bracing for the bomb today, knowing that we had to get an announcement out,” Ellefson said. “Thoughts and prayers are always welcome. Dave has started his treatment. We’ve been in Nashville for the last month and a half working on the album, so we were watching this all unfold before us. … Dave has begun treatment, so things are moving forward. It just became a reality where it was, like, ‘Look, in order to do this treatment properly, follow the doctor’s orders, Dave can’t be undergoing treatment for cancer and be out playing big rock concerts.'”

He added: “So we had to say, ‘We’ve got to just stop. We’ve got to clear the decks and put this as the number one priority,’ which is what the announcement was — just addressing it and giving everybody a heads up that some shows are going to have to go away until this all gets worked out. Dave and I have been through our share of the shitshow: ups and downs, drug addictions, breakups and makeups and everything else in between. This is another one.”

Per a statement from Mustaine, the band has canceled most of their 2019 tour plans, except the MegaCruise, which “the band will be a part of” in some form. Mustaine will undergo a treatment with a “90% success rate”, with plans to continue touring after he’s recovered. The band was slated to tour alongside Ozzy Osbourne in 2019, but those dates had already been postponed until 2020 due to Osbourne’s own health issues.

“Meanwhile, Kiko, David, Dirk and I are in the studio,” Mustaine remarked in his statement, “working on the follow up to Dystopia – which I can’t wait for everyone to hear.”

Added Ellefson in his interview with The Classic Metal Show: “We’re optimistic about the treatments and the success rate is usually pretty good on this one, so I think there’s a lot of optimism at the end of this whole thing. … Other cases have shown that throat cancer is treatable. It’s at a place where it’s certainly, I don’t think, beyond a point of repair. … That’s why I think shutting down right now — at least the touring side of it — is good, because I think if we tried to continue to go out and force Dave to sing and perform, that may not have such a good outcome.”

All updated information will be on Megadeth’s website as it becomes available. Hear Ellefson’s full interview with The Classic Metal Show below.