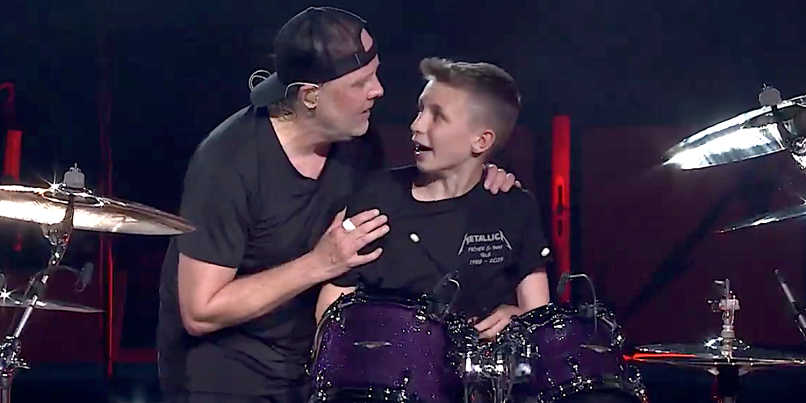 A 13-year-old boy named Evan got the birthday gift of a lifetime when he performed “Seek & Destroy” with Metallica at the metal legends’ show Tuesday night at the Johan Cruijff Arena in Amsterdam.

In pro-shot video posted on Metallica’s socials, James Hetfield is seen saying, “Oh God, Lars shrunk! They put Lars in the wash. I told ’em not to put him in the dryer. He shrunk,” as the camera shows Evan behind the kit, with Lars Ulrich coming over to give him some last-minute advice.


Evan then does a fine job opening the metal classic with Lars screaming, “That’s right!” in the mic before eventually taking over the drum kit from Evan for the rest of the song.

The youngster took to Instagram after the show to write, “Well well well no words I mean to play drums in front of 68,000 people with my hero’s [sic] my favourite band of all time was just the best thing ever and to top it all off it was my bday !!”

One look at the rest of Evan’s Instagram page shows he’s a Metallica fanatic, and an accomplished drummer.