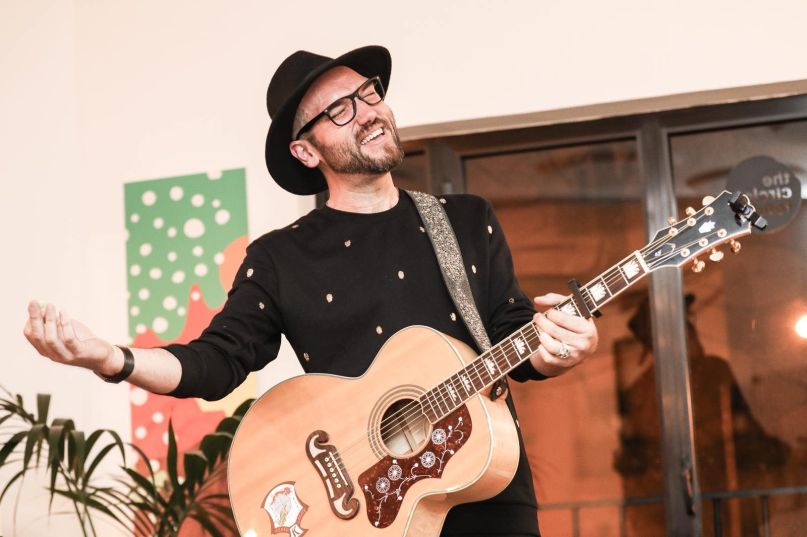 Editor’s Note: Consequence of Sound is an editorial partner of Mad Cool Festival.

Any longtime festivalgoer will tell you that half the fun of attending a music festival comes from checking out new artists who you might not otherwise encounter. That’s doubly true when attending a festival abroad. For the next part of our travel guide to Mad Cool Festival in Madrid, we’re looking past the festival’s gargantuan headliners to find a few of the must-see Spanish artists whose music might wind up as your favorite sonic souvenir. First up: Molina Molina.

(Read: Kokoshca Promise the Best Night of the Year at Mad Cool Festival)

When I asked Pepe Molina where first-time listeners should start with his music, his answer was unequivocal: the newer, the better.

After earning acclaim (as well as, at one time, the MySpace record for domestic streams by a Spanish artist) as an indie rocker in bands like Voynich! and Islandia, the Granada-born, Madrid-based musician reinvented his sound in 2015, expanding his musical palette to encompass a personal brand of pop that he refers to as “cool songs.” Molina traces part of this new sound to his own voracious listening habits.

“My playlists are changing constantly,” Molina said. “When I’m not playing or composing or recording, I’m devouring music. I don’t turn my nose up at any style.”

“My whole universe is inside of this work,” Molina said.

So, what does Molina Molina’s universe sound like? A spin of La gran esperanza blanco reveals that the record’s musical cosmos puts it in similar orbit with synth-pop luminaries like Phoenix, Passion Pit, and Two Door Cinema Club. The record’s 11 songs are calibrated with the beachy effervescence of a summer dance party; if you can somehow keep from moving along with the clap-along beats of “Oz” or the arena-sized chorus of “Estilo imperio”, your hips should probably be studied by science.

This embrace of maximalism is aided by Molina’s own deft production choices; from his spot behind the boards, Molina imbues his record with hooky embellishments that aid but never overwhelm; the head-bopping rhythm section on “Lo vimos venir” is made even more irresistible by the horn-section flourishes that it ushers in, while the spiked guitars of “Monstruo MMXVIII” add just enough dance-punk swagger to recall The Killers at their sweatiest.

Although the bangers may hit the hardest upon first listen, the record’s best moments might also be its most bittersweet. An undercurrent of not-quite-realized love floats just below even the happiest tracks on La gran esperanza blanco; when it surfaces, as it does on standouts “Fotonovela” and “Tu Pizza Fria”, you’re left with cuts that pulse like a lost Pet Shop Boys single or lilt with the same sighs as Mad Cool headliners The Cure circa “Friday I’m in Love”.

If it seems difficult to choose which songs to highlight, that’s because it is. Press materials in the music world are often rightly slagged for the breathlessness with which they overpromise on material, but Molina Molina’s boasts of La gran esperanza blanco as “eleven singles” and “a double A side, no filler” are as well-earned as they are accurate. Each track here could serve as the tentpole of a lesser album. Instead, they’re all here, side by side. For music writers, that creates a headache; for listeners, it has the makings of a new favorite album.

This being a festival preview, it’s fair to ask: how do these songs translate from the intimacy of headphones and stereo speakers and into the wide-open spaces of Mad Cool’s grounds at Valdebebas — IFEMA? For Molina, his songs’ biggest strengths may lie in their adaptability.

“Even from the creation phase, I try to come up with [music] that makes no distinction between small rooms, large venues or festivals,” Molina said. “I do not make big changes regarding structure or production, so I work my heart out [to recreate the sound of the album] onstage. Nevertheless, the songs get vigorous and powerful as I play them live.”

That power will be on full display during Molina Molina’s Mad Cool debut, which comes on the festival’s opening day. As he prepares for his biggest set yet, in front of crowds from across Spain and around the world, Molina is equal parts thankful and confident.

“What can I say? Thanks to Mad Cool for giving me the opportunity to spread my music beyond my followers,” Molina said. “I promise a great show!”

Here are a few of Pepe Molina’s recommendations for things to do while visiting Madrid:

“Strolling through its wonderful streets is a must, as well as touring the historic city center and visiting the Reina Sofía museum. And, of course, having a delicious squid sandwich in downtown is required!”