Smollett had rope around his neck when first met by police 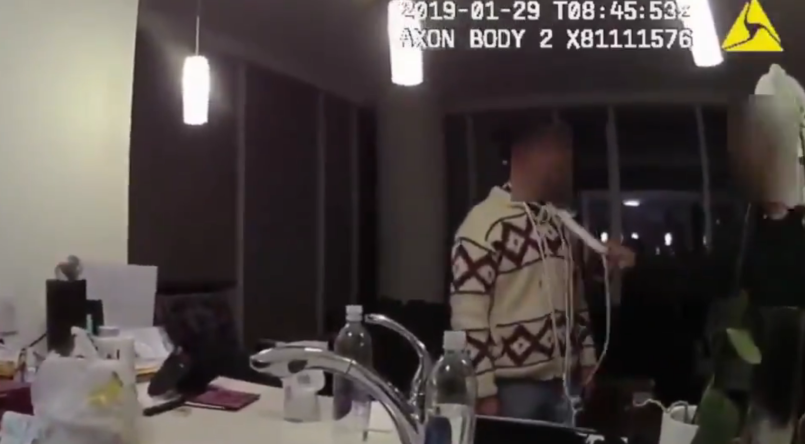 Chicago police have released hours of footage relating to their Jussie Smollett investigation.

The cache of footage include police officers’ initial interaction with Smollett moments after he was allegedly attacked by two white men wearing MAGA hats. In police body cam footage, Smollett (his face blurred) can be seen with a rope around his neck. When an officer asks him if he wants to take the rope off, Smollett responds, “Yeah, but I just wanted you all to see it.” Later, Smollett asks if the officers can turn off their body cams: “I don’t want to be filmed,” he says.

Another video released by police shows Smollett’s alleged co-conspirators, the Osundairo brothers, in a taxi before arriving at the scene of the alleged attack.

Video from inside taxi of Osundairo brother’s on their way to meet Jussie Smollett night of reported attack..according to CPD@cbschicago pic.twitter.com/kYbUcoiwi5

In March, the former Empire actor was indicted on 16 counts of disorderly conduct relating to allegations that he lied to police about being the victim of a hate crime. Following a lengthy investigation, Chicago police concluded that Smollett orchestrated his own attack in an effort to increase his notoriety in the entertainment industry and secure a larger salary on Empire. However, in a controversial decision, prosecutors later agreed to drop all charges against Smollett in exchange for community service and the forfeiture of his $10,000 bond.

Former Chicago mayor Rham Emanuel called the state’s attorney’s actions a “whitewash of justice,” and subsequently sent Smollett a bill for the cost of the investigation ($130,000). When Smollett refused to pay the bill, the city filed a civil suit against him.

Last week, a special prosecutor was appointed to re-examine Smollett’s case and the circumstances surrounding his plea deal.