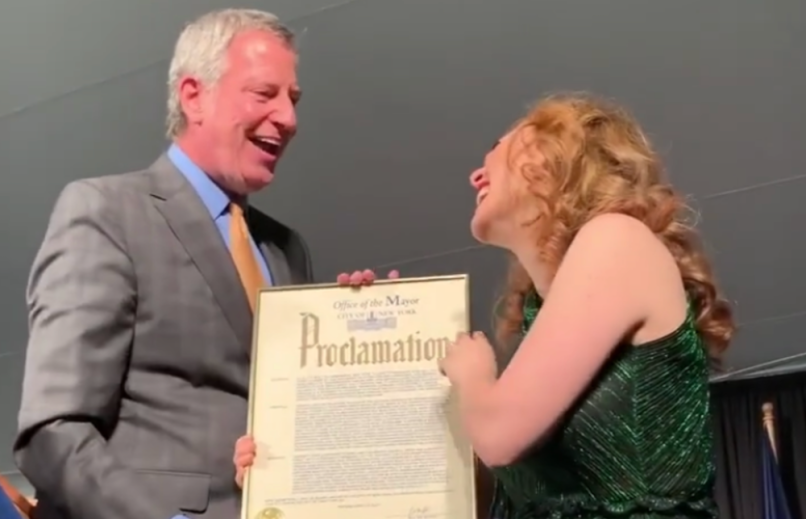 New York City has officially given Regina Spektor her very own day. June 11th, 2019 will forever be dedicated to the Russian-born songwriter, who was celebrated on Tuesday during a ceremony held by Mayor Bill de Blasio.

“Today I was honored at the Gracie Mansion by @nycmayorsoffice / @nycmayor as part of their 17th annual Russian Heritage event!” Spektor wrote on Instagram. “There was a proclamation and June 11th, 2019 was officially declared ‘Regina Spektor Day in New York City’. I’m pretty much speechless- but the joy radiating from my face might have to speak for me.”


(Read: The 100 Greatest Movie Soundtracks of All Time)

Along with receiving a framed proclamation, Spektor took the podium for a very brief performance. She later called the event “a magical evening with the New York Russian Community,” and jokingly described the drinks on hand as having “just the right amount of vodka.”

Honoring her immigrant heritage, Spektor wore a long, green dress “which just so happens to echo our great green ‘Mother of Exiles’ standing in the harbor.” She added,

“Let’s keep lifting our lamps ‘beside the golden door’ and welcoming next waves of immigrants to our great city of immigrants! Whoever you are- wherever you are traveling from- We love you and we welcome you here!”

Check out video footage and pics from Spektor’s special night.

Later this month, Spektor will make her Broadway debut during a five-night residency at the Lunt-Fontanne Theatre. Her nightly repertoire promises hits as well as a variety of deep cuts, some of which haven’t been performed live for decades. Grab tickets here.

Spektor’s last full-length, Remember Us to Life, came out in 2016. Two years prior, the songwriter was nominated for a Grammy for “You’ve Got Time”, the theme song she penned specifically for Netflix’s hit series Orange is the New Black.

This week, Spektor appeared on This Must Be the Gig with Lior Phillips. Below, you can stream their entire conversation in which they discuss the time she opened for The Strokes, her surprise first shows in Europe, and, naturally, her forthcoming Broadway debut.