"Perhaps he should reach out to ... Kanye West, Kid Rock or Ted Nugent" 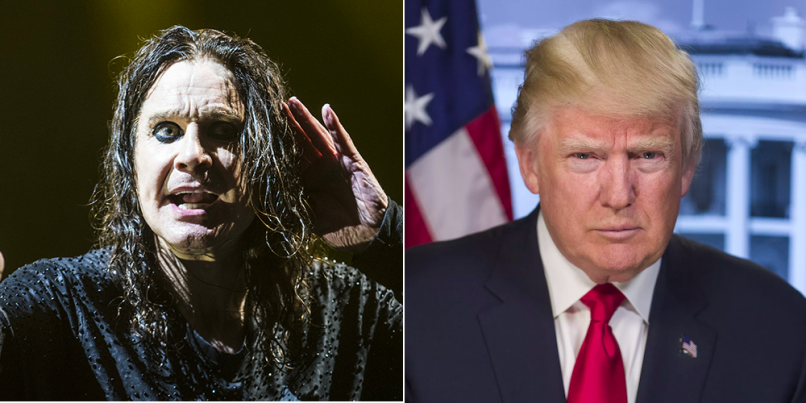 President Trump used the iconic Ozzy Osbourne song “Crazy Train” to poke fun at a technical snafu during last night’s Democratic debate, incurring the wrath of the metal legend’s wife and manager, Sharon Osbourne, who issued a statement on behalf of her husband.

Trump took to Twitter to post a video clip that mocked NBC and MSNBC for audio problems that occurred when moderators Chuck Todd and Rachel Maddow took over for the second hour of the debate featuring 10 of the 20 Democratic presidential candidates, all while promoting his own 2020 campaign.


As of now, the tweet is still up (see below), but it might not be for long. Sharon issued a statement tonight that absolutely ripped Trump, and also managed to call out some of the president’s musical allies:

“Based on this morning’s unauthorized use of Ozzy Osbourne’s ‘Crazy Train’, we are sending notice to the Trump campaign (or any other campaigns) that they are forbidden from using any of Ozzy Osbourne’s music in political ads or in any political campaigns. Ozzy’s music cannot be used for any means without approvals. In the meantime, I have a suggestion for Mr. Trump — perhaps he should reach out to some of his musician friends. Maybe Kanye West (‘Gold Digger’), Kid Rock (‘I Am the Bullgod’) or Ted Nugent (‘Stranglehold’) will allow use of their music.”

Last year, Steven Tyler issued a cease-and-desist letter to Trump for using Aerosmith’s “Livin’ on the Edge” at a rally, while pop star Rihanna took similar legal action for the president’s use of “Don’t Stop the Music”.

Ozzy will be launching his own 2020 campaign when he resumes his “No More Tours 2” trek, which will resume next year after he had to postpone all his 2019 dates due to illness and injuries.