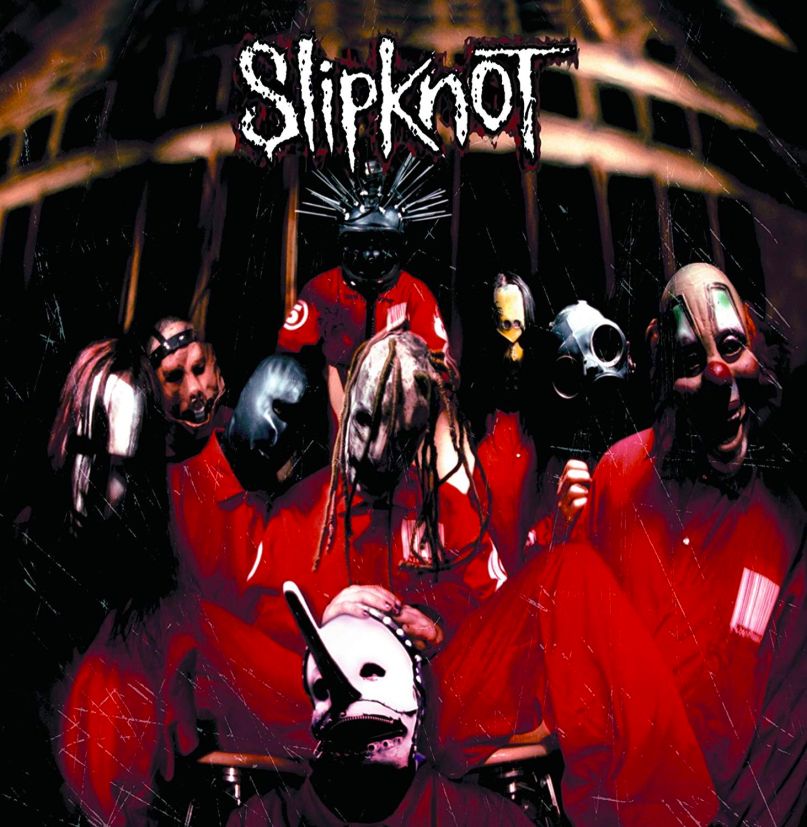 When Slipknot exploded onto the scene with their 1999 self-titled album, they were lumped into the nu metal phenomenon that dominated heavy music at the time, but even with acts like Korn and Limp Bizkit providing a heavy nature to their work, Slipknot were the angrier, more twisted cousin. This wasn’t “nu metal” — it was extreme metal for the masses.

Along with their aggressive sound, the Des Moines, Iowa, band caught the eye of the public with their group size and unique look. Composed of nine members, each musician wore distinct masks; these masks gave off an eerie appeal, tapping into horror aesthetics. While their music contained typical instruments one would find in a band, the numerous members allowed for additional features such as extra percussionists and the use of turntables.


With their self-titled 1999 album — which the band considers its official debut despite a 1996 “demo” album titled Mate. Feed. Kill. Repeat — Slipknot created a work that would push the intensity of heavy music. The LP also marked the beginning of the band’s relationship with label Roadrunner Records, where Slipknot have released all their albums since.

After a jarring introduction track, the album goes into “(sic)”. The song opens to rampant drum beats, turntable scratching popping in alongside the guitar rhythm. The vocals bark over the hectic instrumentation, the track exuding a barbaric tone. The drive in tempo and abundance of instrumental components builds upon this presence; at the track’s halfway point, the song gives off a more hysterical aura, the tempo slowing down as the screaming contorts.

The chaotic spirit found in “(sic)” continues throughout the album, with solid transitions following from track to track. “Eyeless” involves sudden dips and rises in tempo, making for a wild flow that, in a good way, feels unstable. After this comes one of the band’s most popular songs, “Wait and Bleed”. While more straightforward in regards to compositional structure, the track does a tremendous job establishing emotion outside of anger. Vocalist Corey Taylor offers more singing here, injecting a sense of desperation alongside the instrumental’s tense rhythm.

Fueling the record’s collection of brutal songs, such as “Surfacing” and stadium pleaser “Spit It Out”, are guitarists Mick Thomson and Jim Root, along with now ex-drummer Joey Jordison and the late Paul Gray on bass. Chris Fehn and Shawn “Clown” Chahan provide the additional percussions, with Sid Wilson and Craig “133” Jones performing on turntables and providing samples and media (respectively). The record’s production was done by Ross Robinson, famous for working with other bands like Korn, Sepultura, and Fear Factory. Taylor and Root were the newest members in Slipknot at this time, having not appeared on the band’s previous demo, Mate.Feed.Kill.Repeat.

Over the course of 12 songs, the band establish a constant flow of hectic instrumentation, exuding primal rage. This anger serves to bring out the record’s themes of struggle and desperation; whether it’s through lyrics or the atmosphere of the instrumentals, Slipknot’s brand of angst and tragedy come through in each song. The lyrics linger on the ear, producing feelings that range from heartache to fury; the hook of “Wait and Bleed” makes for a memorable moment, as Taylor sings, “I’ve felt the hate rise up in me/ Kneel down and clear the stone of leaves/ I wander out where you can’t see/ Inside my shell I wait and bleed.”

When they aren’t presenting tracks built upon high speed, Slipknot offer slower, more atmospheric cuts. “Tattered & Torn” provides a plethora of turntable work, giving off this nauseating anxiety. The band explores this sensation further in what is easily one of the more stand out tracks on the record, “Scissors”. Taking on a somewhat spoken-word approach, the song feels like something you would find in a horror movie. The turntable touches flair up in the beginning, making way for an atmospheric minimalism as Taylor speaks. Eventually the track rises into a heightened aggression, the electronic elements coming in with the other instrumentation to disorient the listener. At the halfway point, the track erupts into all-out madness, the instruments sporadically thrashing together.

The anger and intensity of the self-titled debut would be all that Slipknot needed to win listeners over. That said, Slipknot’s theatrical component is certainly an element that allowed them to stand out among other contemporary bands at the time.

When Slipknot began taking to the road, there was no one else like them; the band brought a whole new meaning to the idea of “over-the-top” performances. Who can forget Taylor jumping in the air, screaming and thrashing his body as he headbanged; then there’s the iconic image of watching Clown bash metallic barrels with baseball bats. And since those first shows, Slipknot have remained one of metal’s more theatrical and engaging live bands.

The journey Slipknot have taken over these past 20 years is remarkable; full of tremendous highs and heartbreaking lows, the band has remained determined to deliver some of the most memorable music of our generation.

The self-titled debut album is truly one of metal’s most important works, having pushed the boundaries of heavy music and performance. It is a timeless record, proven by the fact that whenever the band go on tour, thousands of fans cheer for the likes of “(sic)”, “Wait and Bleed”, and “Spit It Out”. After 20 years, the ferocity of Slipknot’s first album continues to live on and represent an evolution in heavy metal.