Song of the Week: Bon Iver Battles the Fame Monster on “Hey, Ma”

by Sean Lang and Samantha Lopez 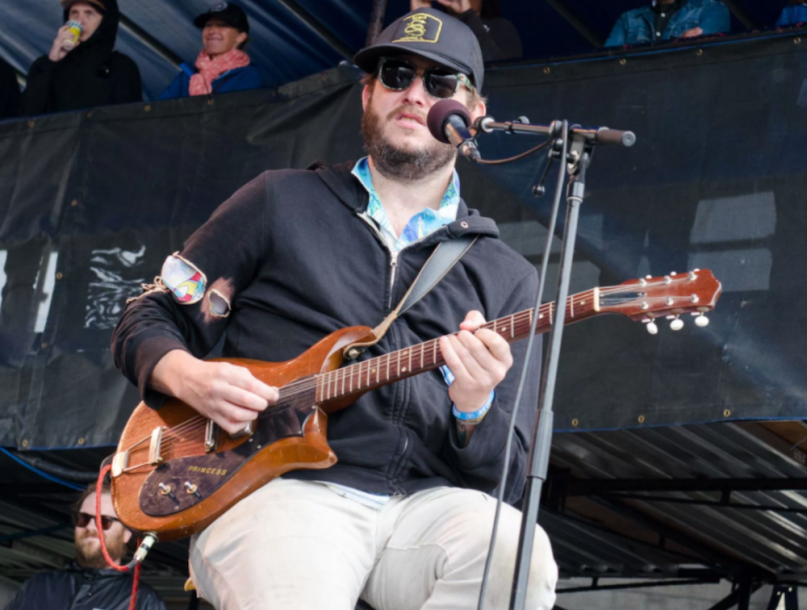 Bon Iver’s Justin Vernon has been anything but inactive since 2016’s 22, A Million. He collaborated with The National’s Aaron Dessner on their Big Red Machine project, put on two iterations of Eaux Claires, the festival he and Dessner co-founded, made a moderately controversial appearance on an Eminem track, and so much more. Now, he’s released the first new music under the Bon Iver moniker in just under three years (notwithstanding a song on the Creed II soundtrack).

At the end of their performance at All Points East festival in London, Bon Iver treated the audience to the studio versions of “Hey, Ma” and “U (Man Like)” and pointed them to icommai.com (stylized iCOMMAi), which looks to be part dissemination of information — Bon Iver’s expanded tour dates and credits for the two new songs are posted there — and part artsy blog — the most recent post, from June 5, features cryptic drawings and text that appears on the “Hey, Ma” cover scattered across the page. It’s difficult to find public information on what might be a new Bon Iver album, but a full tracklist has already been posted on genius.com, with fans speculating that it will be titled I, I.

As always, Bon Iver remain somewhat inscrutable on “Hey, Ma”, with nostalgic references to family and childhood. The most clearly traceable lyrical through line sums to a reflection on the way fame has impacted Vernon’s interpersonal relationships. On the chorus, he sings, “Tall time to call your Ma/ Hey Ma, hey Ma/ Tall vote, you know you mope it up/ Well, you wanted it your whole life.” It’s a familiar sentiment. He has what he always wanted, yet contentment eludes him, and, wrapped up in the busyness of what his life has become, he knows he ought to call home. Another lyric finds what we might suppose is a younger Vernon foreseeing the changes to come. “I hoped it all wunt go in a minute/ With the past that you know,” he sings, but all signs seem to say that that past is long gone.

Indie icons Pixies have been peppering snippets of new music for a minute now. We finally got a new song this week. “On Graveyard Hill” marks the band’s first release since 2016’s Head Carrier and is a spooky, boisterous jam. The song makes many references to “the witching hour” and is stamped with the unmistakable reverberation of Pixies guitar that we’ve all come to know and love. –Samantha Lopez

Team Dresch – “Your Hands My Pockets”

Shortly after forming in 1993, the Portland-based punk band became a mainstay of the queercore movement while founding member Donna Dresch’s record label, Chainsaw, put out music by other bands in the scene. Now, Team Dresch has returned. “Your Hands My Pockets”, the band’s first new song in 19 years, is an urgent declaration of queer desire. “I want her come/ I want her company,” vocalist Jody Bleyle sings while the song’s chorus finds her concluding that “there is no other way.” –Sean Lang

The Philadelphia-based (Sandy) Alex G is set to release a new album, House of Sugar, this year. The new record will be a follow-up to 2017’s Rocket. This week we were graced with its first single, “Gretel”. The song opens with a hauntingly and airy layered sound: quavered vocals, sharp guitar plucks and strings, and an inexorable groove. –Samantha Lopez

Opening up with the notable plucking guitar twang Whitney are heavily associated with, “Giving Up” sounds like a track about the slow conclusion of a relationship. Some would assume a romantic one; however, a press release described the upcoming record emphasizing the bond between best friends and creative partners. The song sings, “Though we started losing touch/ I’ve been hanging on because/ You’re the only one I love/ Even when you’re giving up,” which is held together by shaky percussion, downcast strings, and a glorious instrumental section, complete with glimmering trumpets and electric guitar riffs. –Samantha Lopez

This is not the first single that Melina Duterte (aka Jay Som) has released since her excellent full-length debut, 2017’s Everybody Works, but it is (at long last!) the first single off of her follow-up. Anak Ko, whose title means “my child” in Tagalog, is set for an August 23 release date. On “Superbike”, Duterte obliquely narrates the dissolution of a relationship, though she doesn’t utter a word during the song’s second half. Instead, she opts to let the sometimes swirling, sometimes droning guitar do the talking while she, perhaps, rides the titular “superbike” into the night. –Sean Lang

Following the theft and subsequent leak of what would have been his debut album in 2013, Jai Paul disappeared from the public sphere. Now, he has released the same demo album that was leaked then, along with two new singles and a message for fans about Paul’s experience of shock and aloneness when the unfinished material leaked. Paul’s voice soars over the unhurried groove of “Do You Love Her Now”, a track more closely aligned with R&B than the electronica of “BTSTU” and “jasmine”, the two songs that garnered Paul international attention six years ago. –Sean Lang

The rising New Zealand act Miss June are still making a name for themselves in the States; their latest release, “Best Girl”, is only going to speed up that process. “Best Girl” is a bolstered, anthemic pop-punk jam for the next generation. It’s sure to be circulated around house shows and the DIY scene for its infectious high energy. –Samantha Lopez

Mal Blum is releasing a new album, Pity Boy, next month. Based in New York, the musician has already shared few tracks, including this week’s release, “Salt Flats”. The song begins with a patient and slow feeling, as though trudging through the the Utah land it’s named after but then transcends into a moment of ferocity with evocative images. –Samantha Lopez

Based out of the suburbs of Rochester, Michigan, The Doozers excel at a particular brand of high-energy, highly danceable, hook-driven indie rock, at times reminiscent of Two Door Cinema Club and Phoenix. On “Lemon Poppyseed”, the four-piece’s second single ahead of their as yet unnamed debut due out “mid July” (according to their Facebook page), guitarists Sean Donnelly and Charlie Belleville lay down riff after riff while Kyle Garland’s drums and Melanie Kelley’s bass ensure that the track couldn’t lose momentum if it wanted to. –Sean Lang