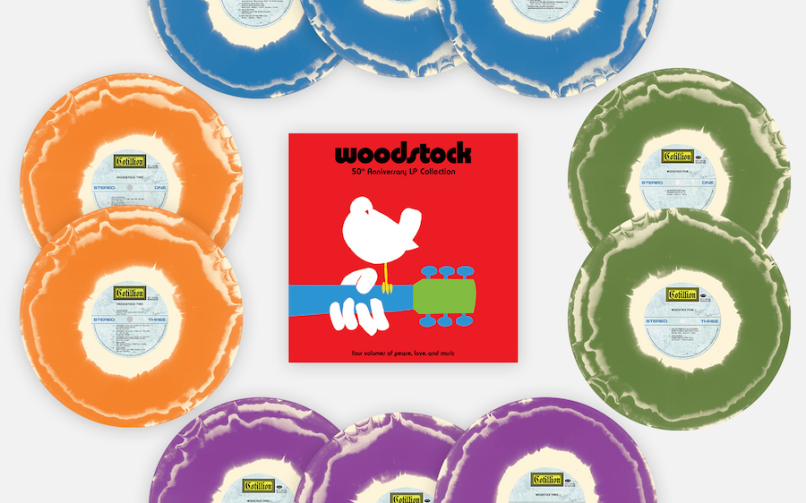 The 50th anniversary of Woodstock is fast approaching, and everyone is finding their own way to commemorate the iconic event. Some are out there trying to get a revival festival up and running a few miles northwest of the original White Lake site. Others are looking back at the original Woodstock and celebrate the music that made the gathering such a landmark moment in music history.

That’s exactly what Vinyl Me, Please is doing with their latest box set reissue. This August, the record club will release the Woodstock 50th Anniversary LP Collection, the 2009 set that encapsulated the four days of peace, love, and music across 10, tie-dyed 12-inch vinyl records. The set features a number of memorable performances, including Jimi Hendrix’s “Star Spangled Banner” medley; Richie Havens’ “Freedom (Motherless Child)”; Crosby, Stills, Nash & Young’s “Wooden Ships”; The Who’s “We’re Not Gonna Take It”; Joe Cocker’s “Withe a Little Help from my Friends”; Melanie’s “Mr. Tambourine Man”; Creedence Clearwater Revival’s “I Put a Spell on You”; and Janis Joplin’s “To Love Somebody”. There’s even audio of the muddied crowd singing “Let the Sunshine In” during the infamous Sunday rainstorm.

Woodstock 50th Anniversary LP Collection is a perfect way to experience everything that made those four days in White Lake such an indelible memory across decades of musical consciousness. But instead of waiting till the actual anniversary date to get your copy, we’re giving away one (1) complete Woodstock 50th Anniversary LP Collection box set from Vinyl Me, Please. To enter, simply fill out the widget below.