Freddie Gibbs & Madlib Deliver a Knockout on the Hard-Hitting Bandana

The Gary, Indiana, native searches his soul and looks forward to a life beyond the hustle 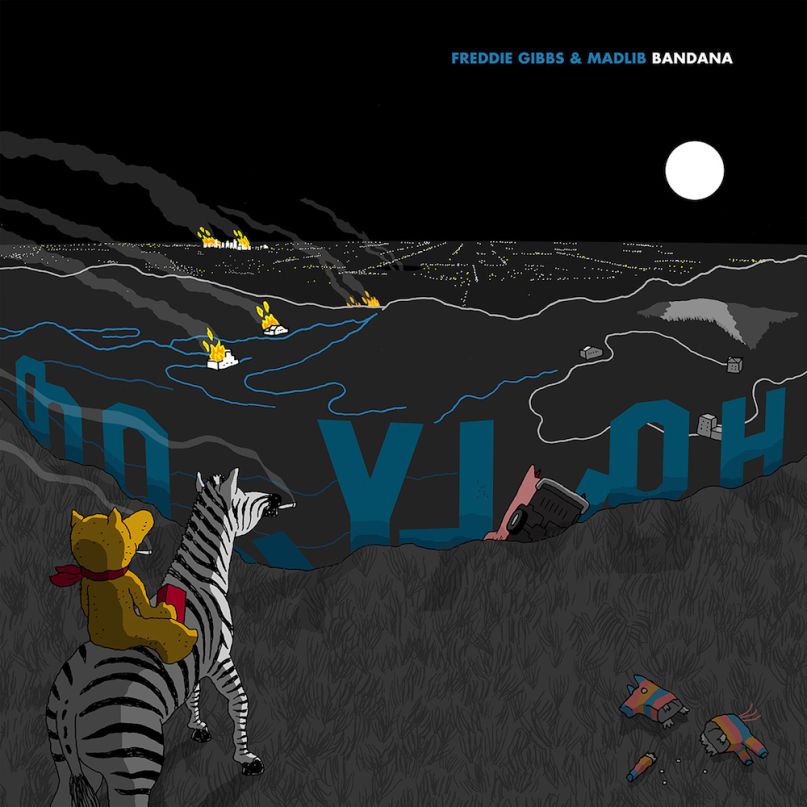 The Lowdown: The hip-hop scene has never been more diverse than in 2019. Tyler, the Creator broadened the genre’s scope with his heartfelt masterpiece, IGOR, earlier this year. Meanwhile, Latinx rappers like Bad Bunny and J Balvin and British rappers like Little Simz continue to push boundaries with unique perspectives and approaches to music. These innovations and new voices prove hip-hop is alive and well. But sometimes, a refocusing on a genre’s roots can be necessary.

Five years ago, the unlikely collaboration between quirky beat-maker Madlib and straightforward gangsta rapper Freddie Gibbs filled that necessity. With smooth soul samples and hard-hitting street raps, their acclaimed record Piñata recaptured and updated the energy of Public Enemy and Gang Starr for a new generation still facing the hard realities of Black life in America. In 2016, Madlib announced a follow-up record titled Bandana; however, a year of clearing samples, jail time (for a crime Gibbs was later acquitted of), and other circumstances delayed the release until 2019.


Upon the album’s release, it’s now clear the wait was worth it. The extra development time only allowed MadGibbs’ masterful work to marinate longer and reach its fully focused potential. At 14 minutes shorter than its predecessor, Bandana concentrates the grimy energy of Piñata into an even more potent punch, and the result is a knockout.

The Good: Madlib’s beats have never sounded grittier than on Bandana. Here, Madlib takes Piñata’s smooth, symphonic, and soulful performances and reimagines them a little darker, a little grittier, as though Gibbs’ lyrical cocaine powder ingrained itself into the sampled ‘70s vinyls. The beats crackle and pop and become an integral part of an already booming rhythm section, especially on closing track “Soul Right”.

Madlib’s curatorial approach to digging for the dustiest and most obscure samples continues to cement him as not only one of hip-hop’s best producers, but one of music’s great historians. In this role, the master crate-digger resurrects obscure artists like Walt Barr, whose 1979 track “Free Spirit” becomes the dreamy, keyboard-driven foundation for the nuanced “Crime Pays”. “Fly like the wind/ It’s time to begin a new life,” the sweetly sung sample warns as Gibbs recounts the menacing consequences of criminal life instead of boasting about stacking bricks.

In fact, the majority of Bandana finds Gibbs at his most introspective, which isn’t surprising, considering much of the record was written behind bars. “During the jail shit, it was a lot of praying and reading and soul searching,” Gibbs told Complex. “I didn’t have nothing in there but God and my memories. All I could do was just remember beats.” On nearly every track, Gibbs’ memories turn into harrowing life stories as he rhymes with a road-worn gravitas and precision unmatched since the days of Tupac and DMX. “Every time I sleep, dead faces, they occupy my brain,” Gibbs shares on “Fake Names”, a recounting of Gibbs’ drug-dealing career and a critique of his own egotistic greed, leading him to rap: “Devil on my shoulder said, ‘Fuck friends ’cause cash rules.’”

While Gibbs is ambivalent, if not fully remorseful, about his crime career, he also blames an oppressive American system for his plight. On “Flat Tummy Tea”, Gibbs delivers a scathing review of history over Madlib’s seamless beat switches: “Crackers came to Africa, ravaged, raffled, and rummaged me/ America was the name of they fuckin’ company.” While Gibbs has the self-awareness to critique himself and others in the African-American community (“Fuck Spike, he mostly show Malcolm on coke and white whores”), he has no tolerance for racial oppression and whitewashed history, opting to take “the sword and [knock] white Jesus off of that white horse.”

The Bad: If we’re being nitpicky, Bandana’s opening tracks deliver a slow start between the goofy text-to-speech opener “Obrigado” and the follow-up spoken intro on “Freestyle S**t”. As soon as the music kicks in, however, it’s near-perfection straight through.

The Verdict: From beginning to end, Bandana is a perfectly-paced album. Madlib never lingers on a single musical idea as he chops samples and switches beats, often midway through songs. Meanwhile, Gibbs, an expert in flows and rhythms, glues each song together with his undaunted, straightforward performances, which offer an illusion of effortlessness. The finished product plays like a film: action-packed, humorous (see the cussing pastor skit on “Situations”), and openly introspective.

Thematically, Bandana still celebrates the hustle. Gibbs doesn’t downplay his role in bettering his financial situation and rising to elite MC status, especially despite an oppressive environment that would rather see him fail. But perhaps more than ever, on Bandana, Gibbs hopes for a reality beyond the struggle. “I still pray the Lord’ll get my soul right,” Gibbs confesses in the album’s final lyric. By practicing focused soul-searching, continuing to grind away at his craft, and surrounding himself with strong musical companions, Gibbs has made necessary initial moves in that direction.