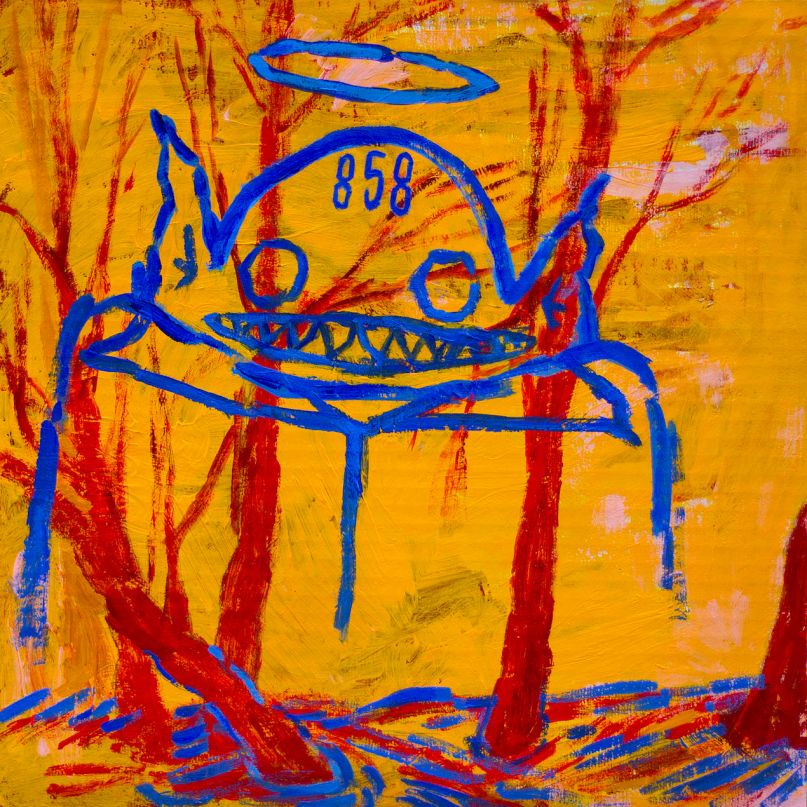 The Lowdown: A haloed goblin whose forehead bears San Diego’s area code, 858, greets us from the cover of Heaven Is Humming. As with most of Goon’s cover art, frontman and visual artist Kenny Becker has restricted himself to a palette consisting of primary colors: red, yellow, and blue. This approach of using basic ingredients as means to creations that tug on greater truths carries over into his band’s music, where a standard two-guitar, bass, and drums lineup join together in well-ordered cacophony. The primary colors of Becker’s art may reflect a stylistic simplicity, but the restrictions that they impose make familiar subjects alien: trees become red instead of brown, the sky yellow instead of blue, and green grass anything but. What do we make of this new reality?

The LA-based four-piece are purveyors of a wide range of chunky guitar rock, with vocals that bear the influence of ’90s indie rock. From the immediately railing discord of “F Jam” to the more serene but no less foreboding acoustic guitar and strings of “Snoqualmie” (named for the Washington town where exterior shots for David Lynch’s Twin Peaks were taken), Goon take care not to tire out any given idea. They instead exercise borderline-excessive self-awareness, always shifting gears before their listener’s attention can drift too far.


The Good: Becker began writing the songs that appear on Heaven three years ago, and it’s evident that he dedicated those years to crafting a thoroughly considered album. Intentional lines drawn between Heaven’s tracks save them from melting into a homogeneous sludge of fuzzed-out guitar and nasally vocals. Droning punk anthems (“F Jam”, “Deny”), indie rock bangers (“Cammie at Night”, “Check Engine Light”), and songs just a little too filled out to be slowcore (“Critter”, “Mem”) coexist while conspicuously marking their own territory. You’ll also hear a tasteful synth or semi-nostalgic ambient recording occasionally sewn into the mix, and Becker and Drew Eccleston’s intermittent harmonies lend a refreshing layer to Goon’s careful stacks of sound.

Through its subtle stylistic shifts, the overall tone of Heaven is consistent, making for a front-to-back listen that’s satisfying in its cohesion. The album’s dynamic range makes its quiet moments especially impactful. Songs like “Snoqualmie” and “Critter”, or at least its final third, showcase the tense human heart that lies at Heaven’s center but risks obfuscation when the band cranks it up to 11.

The Bad: Because Goon’s most emotive artistry comes out when they go acoustic on “Snoqualmie”, it’s a bummer that they only do it once. Worth noting is that “She” — which Grizzly Bear’s Ed Droste put at the top of his “Favorite Songs of 2017” playlist — also features acoustic guitar over electric. Their electric riffs aren’t any less gripping than their acoustic ones, though. It’s just that songs like “F Jam” and “Black Finch” can give the impression that three years might have been too much time to process and produce, resulting in a product that’s almost sterile in its exactness. And when he’s not screaming, Becker’s deadpan vocals sometimes verge on sounding bored, which, you know, maybe he is. (“I know I’m unhappy, bored and right,” he sings on “Mem”.) Either way, you might be left wondering why the stakes end up feeling lower than they first seem.

The Verdict: Heaven Is Humming successfully builds on the foundation laid by Goon’s first two EPs, 2016’s Dusk of Punk and 2017’s Happy Omen. It’s a solid debut that finds the band stretching in a few different directions while remaining conservative, like someone standing on top of an upside down milk crate and reaching as far as they can without toppling over. Songs like “Datura” and “Check Engine Light” aim for catharsis and mostly succeed, with tight riffs at high volumes, but the album’s lone acoustic cut, “Snoqualmie”, offers Heaven’s greatest payout.