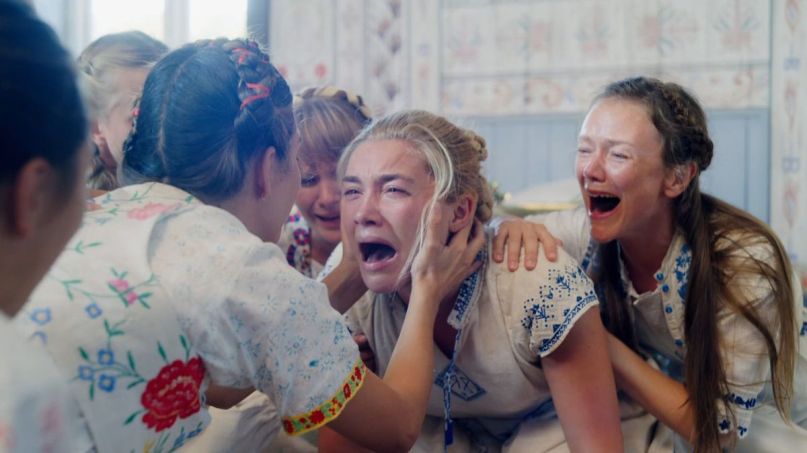 Last summer, Hereditary left audiences shook. The debut feature by writer-director Ari Aster turned a portrait of grief into an insidious nightmare. Only one year later, his sophomore follow-up, Midsommar, has captured the same level of attention. This time, though, Aster has left behind the oppressive darkness in favor of a bright summer hallucinogenic trip to folk horror land.

Florence Pugh stars as Dani, a woman crushed by devastating loss. Because of that, her disinterested boyfriend, Christian (Jack Reynor), can’t bring himself to break up with her and instead invites her along on his group trip to Sweden to celebrate a rural village’s fabled midsummer festival. Their idyllic retreat devolves into a series of increasingly bizarre and twisted rituals that irrevocably changes their lives.

In the span of a year, Aster has released two genre films that have left a deep impression. Hereditary and Midsommar have both sparked intense debate over their meanings and intent, but the ending of Midsommar has proven particularly divisive. Read on for Aster’s thoughts on the debate, clues waiting to be mined still, and more.

Hereditary released in theaters last summer, and Midsommar came out this summer. How is it that you’re able to keep up with this intensely fast release schedule? Is extensive storyboarding and planning part of that?

Well, it has been nonstop for the last two and a half years. I actually don’t do storyboards, although I do story board the big set pieces. What I do is I shot list. So, I write a shot list on my own, and those shot lists are usually about 100 pages long. And then I go to my cinematographer and my production designer, and I take them through the shot list scene by scene so that we all have the same movie in our head.

On this film, I was in post-production for Hereditary. We were doing sound and music, and it became clear that we were likely going to get a green light for Midsommar to shoot that in the summer, and this was in the spring. And I realized that I needed to do the shot list while I was finishing Hereditary so that we could then go scouting for fields in Hungary that might suit the film. And I would have an idea of what was needed by way of geography and how to lay out this village.

It was an incredibly accelerated schedule, and, ultimately, we did what we could in that time. The thing about making any movie is you just never have enough time. And this one, that was definitely the case here where it would’ve been great to have more time through the entire process from pre-production to production to post-production.

But it was a big education for me. So was Hereditary, and I learned a lot from basically sprinting through these two very ambitious movies. I mean, on Hereditary we built that whole house on a stage, which was a dream come true for me. And then we jumped into building an entire village in an uncultivated field, which we also had to cultivate.

The idea for Hereditary started with specific imagery, namely of the head hitting the telephone pole. Did you have specific imagery that sparked Midsommar or certain moments that you crafted the rest of the narrative around?

You’ve described this as Dani’s fairy tale, but folk horror for everybody else. And there’s been this intense debate about the ending, namely on Dani’s catharsis versus the manipulation of her. What are your feelings on that?

Well, I’m happy that that debate is happening. I was certainly hoping for that. It is obviously designed to be very cathartic, but my hope was always that people would walk out of the film and have to wrestle with that catharsis if in fact they felt it at all.

I hope that both Dani and Christian are relatable. I know that I’ve been on both sides of that dynamic, and it just so happens that we are very much aligned with Dani in this film, and she’s a character that we are with. In that sense, Christian is a foil to her, and he is the antagonist.

So, the movie kind of takes that stance and is moving towards the resolution of that story from that perspective. But I’m hoping that it’s the kind of thing that people can get caught up in while they’re watching it, and then afterwards something that they do have to contend with.

I also know that it pretty much depends on where you are in your life as well. If you come to the film and you’re in a relationship where you are the Christian, and I think we’ve all been there, then I think the way the movie will play will be very, very different than for somebody who identifies strictly with Dani.

And I imagine it might be either a more disturbing movie or maybe just a more obnoxious one if you are aligning yourself with Christian, but yeah.

I think also what shifts your allegiances a bit is the way that you put the clues in plain sight, and these characters are not picking up on it because they’re so wrapped up in their own lives. I was curious if you could talk more about that and maybe if there’s anything that you feel like the audiences haven’t noticed yet?

Well, there are a lot of things that I feel audiences haven’t quite noticed, but I always liked when it feels like there are things that are being skimmed over or missed because I’m hoping that it’ll contribute to maybe the film’s shelf life, so that if you return to it, you catch those things.

I’m not sure if I would want to lay those out explicitly, but there are a lot of things that I was hoping we would hide in plain sight as far as the film’s politics are concerned, and I quite like that it seems that those things are still kind of hidden in plain sight.

Some people have taken umbrage with certain things, and I feel that in some ways they’ve been misconstrued, but I don’t want to go too deep into it. You don’t wanna come off as defensive or lead the conversation.

If anything, I like people getting upset about certain things because hopefully it draws out a dialogue as opposed to just a verdict.

I was curious about the research process, because it seems like it was a mix of a whole bunch of different folklore and rituals. How did you arrive at these specific beliefs of the Hårgan people and their rituals?

Well, you know, I did do a lot of research into Swedish traditions, Swedish folklore. I learned the runic alphabet, which is not so hard to learn. There are very few actual symbols to gain an understanding of. And you know, I also went into Germanic and English midsummer traditions. And then I looked into a lot of spiritual movements, and then I was pretty liberal about how I drew from all of those. And then there was just a lot of invention that came out of that research, and it really became just a matter of conforming those things to the story that I was telling.

I’ve talked about this before, but it was very important to me that the Hårgans feel like a lived-in place with very rich traditions, a deep history, and for them to feel very real, but then at the same time, they are really a fulfillment of all of Dani’s needs. And so, there is a way of watching the film and seeing everything they’re doing as almost like this equivalent of like a deus ex machina, coming from the sky and stuff, and liberating Dani from an otherwise stifling and hopeless situation.

Final Question: What’s next? And will it continue to exist in the genre space?

Well, I’m thinking about two projects right now. I’ve written a lot of scripts that are sort of just sitting on a shelf, and two of them are in the conversation about concerning what’s next. One is a sort of nightmare comedy that is pretty goofy but very dark, and one is a kind of operatic, domestic melodrama. Right now, I’m talking to my producer, Lars Knudsen, and we’re trying to settle on what would be the right next step.