Cannibal Corpse’s Corpsegrinder on troubled guitarist Pat O’Brien: “We want him back”

"When I saw him in the court with the vest, dude, I cried" 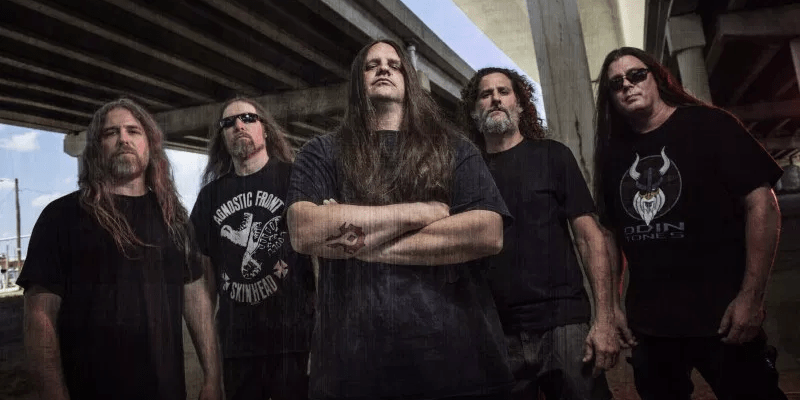 At the end of last year, Cannibal Corpse guitarist Pat O’Brien made international headlines for a truly bizarre incident that landed him in jail, and ultimately forced him to step away from the band. Now, the veteran death-metal act’s singer, Corpsegrinder, says that the band loves him and wants him back.

To quickly recap, in December 2018, O’Brien was arrested after he allegedly entered a stranger’s home in his Florida neighborhood, knocking down one of the occupants before fleeing the dwelling. He apparently charged at officers with a knife when he was found behind a fence, and had to be tased in order to be detained.

All the while, the Northdale, Florida, house that O’Brien was renting was up in flames, complete with more than 80 firearms and military-grade flamethrowers. After appearing before a judge in an anti-suicide vest and shackles, he was eventually released from jail on $50,000 bond.

Cannibal Corpse went on to tour with a replacement guitarist, Hate Eternal’s Erik Rutan, as O’Brien still faces charges of aggravated assault on a law enforcement officer with deadly weapon, and burglary of an occupied dwelling with assault or battery.

In a new interview on Hatebreed frontman Jamey Jasta’s podcast (listen below), Cannibal Corpse vocalist George “Corpsegrinder” Fisher said, “I don’t wanna speculate about what could have happened that night, but it could have been way worse — for him. When people were seeing [TV reports] — I think on the Tampa news, they were pretty good with him. They just said he was one of the best guitar players in death metal in America, and in the world, and he’s highly respected. And they didn’t really trash him at all.”

He added, “We love him. We want him back. But when I saw him in the court with the vest, dude, I cried. Because we just got home from tour… We wish the best for him, and we’re just waiting to see. He’s got a road ahead of him still with legal issues, and that’s out of our hands. We support him 100 percent; we’re behind him 100 percent.”

Cannibal Corpse recently supported Slayer on the spring North American leg of the thrash legends’ farewell tour. Currently, Cannibal Corpse have a handful of dates left on a European tour, with no other shows scheduled for the remainder of 2019 thus far.