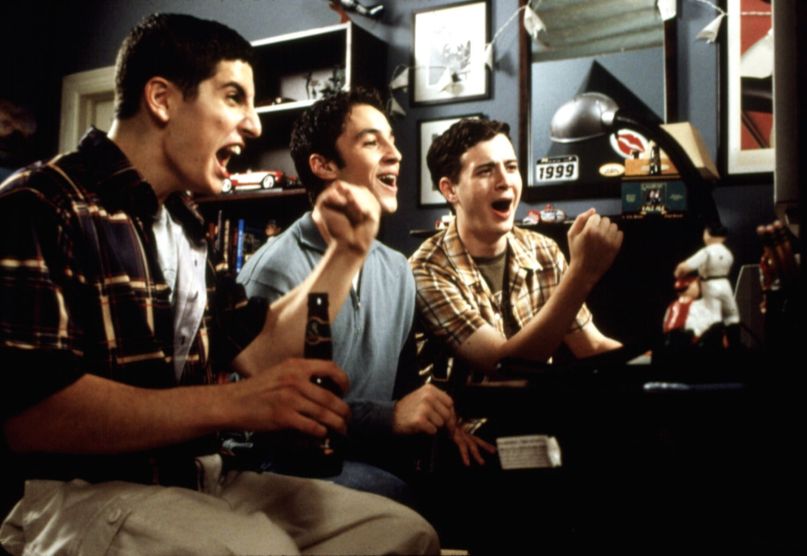 1999 was the year that America hit peak teen movie: She’s All That, 10 Things I Hate About You, Cruel Intentions, Varsity Blues, and Never Been Kissed were all released that year (among many others). But no teen movie hit bigger than American Pie, which crossed the $100 million dollar mark at the domestic box office and single-handedly popularized the term “M.I.L.F.” A raunchy teen sex comedy about four high school boys who make a pact to lose their virginities by the time they graduate, American Pie was a hard-R-rated high point for the genre. But 20 years later, it’s the lows that stick out. A massive hit in its time, the film now feels more like pop culture detritus.

For starters, the film’s skeevy to the extreme with any of its sweetness overwhelmed by the caustic bite of its sexual politics. The tactics that Jim Levenstein (Jason Biggs) and his friends Oz (Chris Klein), Kevin (Thomas Ian Nicholas), and Finch (Eddie Kaye Thomas) go to get themselves laid throughout the film tend to lean more towards creepy than charming. And while it’s a tricky thing to try and apply modern day moral standards to older works, that’s not exactly the case here. Just take the rousing St. Crispin’s Day speech that Kevin delivers when he and his friends decide to institute their pact:

“We must make a stand, here and now. No longer will our penises remain flaccid and unused! We will fight for every man out there who isn’t getting laid and should be. This is our day. This is our time. And, by God, we will not stand by and watch history condemn us into celibacy. Yes. We will make a stand. We will succeed. We will get laid!”

If that sounds like an incel starter kit, it’s because it is. And unlike, say, Fight Club, another 1999 film that tread on similarly dangerous territory, the disturbing overtones in American Pie are mostly unconscious. At least Fincher and co. knew they were playing with dynamite. American Pie creators Paul and Chris Weitz, meanwhile, were doing no such thing. They were making a broad mainstream comedy, one that’s content to lightly bop their heroes on the nose for their “give me sex or give me death” attitudes and chalk it up to boys-being-boys on their way to becoming men. As far as they’re concerned, they’re not working with dynamite at all.

Here’s a big problem: The film’s centerpiece is a teen boy secretly live-streaming his nude classmate. In 1999, this might have seemed gross but novel. In 2019, it’s an all-too-real menace. When the entire school gets a hold of the feed, the movie’s focus turns to Biggs’s sexual humiliation, conveniently ignoring the fact that he just filmed a young woman (Shannon Elizabeth) undressing without her consent. In today’s #MeToo era, it’s impossible to laugh at this scene now—or especially find it titillating. In fact, the only amusing facet about the whole scene is the dial-up Internet they’re using to commit the morally heinous sex crime. Those horny teen sociopaths on Euphoria don’t understand how easy they have it.

Watching the film now, it’s hard to even lean on feelings of nostalgia. Though, some might revel in its pop-punk-a-licious soundtrack, which culminates in a cameo from Blink-182 themselves, while others might enjoy a game of Remember When. From a 2019 vantage point, the cast’s limitations are more apparent, limits that were born out by numerous stalled careers. They all play their parts well, but very few of them bring anything beyond what’s on the page — as if they were all given a single adjective to play and little else: Nervous, Douchey, Hot, etc. Klein, in particular, is a nice reminder that Election came out that same year and put his dim-witted nice bro powers to far more effective use.

If anything, it’s somewhat revelatory that two of the film’s best performances—Natasha Lyonne’s sarcastic friend Jessica and Eugene Levy’s iconic Jim’s Dad—are inhibited by a relative lack of screentime. Granted, some of these flaws would be easier to forgive if the film was funnier, but that’s one of its biggest problems: It’s just not that funny. The flick is pervy, sure, but it’s also quite normcore. It’s the shock humor equivalent of sticking with missionary. One of the film’s better gags finds Sean William Scott’s douchebag Stiffler chugging down a big gulp of jizz-filled beer, but even that quickly turns redundant. How many times can he almost drink the beer before, finally, he downs it? It’s not uncommon for old comedies to feel slow by modern standards, but when the punchlines in American Pie finally do land, they do so with a gentle thud.

In hindsight, it took Seth Rogen and Evan Goldberg’s Superbad to revive the teen sex comedy, and American Pie quickly displays why the Apatovian improv method was such a necessary correction to scripted studio fare: Better to let a bunch of professionally funny people riff until a good joke appears than to employ a thousand studio hacks churning out weak punchlines. Also, Rogen and Goldberg just wrote a funnier, truer-to-life script, period. Give me Seth’s secret stash of dick drawings over Jason Biggs’s tube sock any day.

Teen movies have always gone through boom and bust cycles, and their appeal is ineffably limited (mostly) to the generations of then-youngsters who were their intended targets. Beach Blanket Bingo had to die so that The Breakfast Club could live. Will future teens care one single whit about Ferris Bueller? Do current teens? But even when these films are weakened by the passage of time, the great ones still usually carry some residue of greatness: A knockdown performance, some fizzling chemistry, a killer soundtrack (or, in the case of 10 Things I Hate About You, all three). But watching American Pie now, it is so entirely divorced from modern sensibilities—both ethically and aesthetically—that it’s almost unwatchable. Any impulse one might feel to forgive its misogyny is mitigated by the lack of anything worth sticking around for.

In its time, American Pie was so successful that it spawned a pair of franchises. In addition to the official mainline sequels— 2001’s American Pie 2, 2003’s American Wedding, and 2012’s American Reunion—there were also the four direct-to-DVD spinoffs starting with 2005’s American Pie Presents: Band Camp. But revisiting the original today, it feels like the end of something, not the beginning, and while that traditionally warrants feelings of melancholy, it might actually be something worth celebrating. “They don’t make movies like American Pie anymore,” some might say, to which the answer is: “That’s probably a good thing.”