The band also played "Sicilian Crest" off their new LP, In League with Dragons 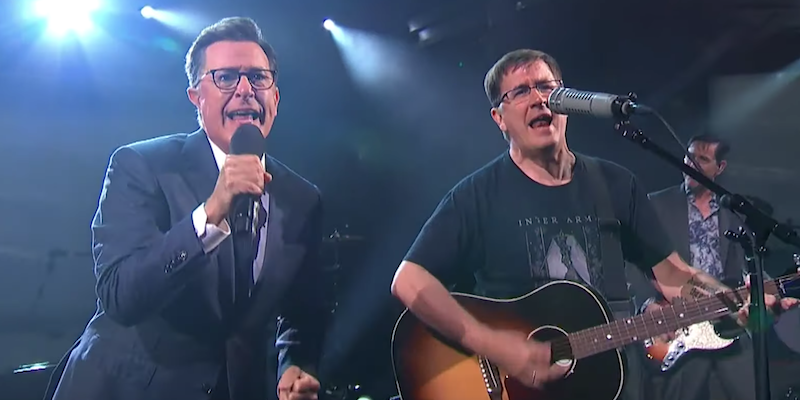 The Mountain Goats with Stephen Colbert

Two months ago, The Mountain Goats released their seventeenth (!) studio album, In League with Dragons. Last night, they appeared on the Late Show ostensibly to support the new effort, but Stephen Colbert had intentions of his own. In addition to the Dragons cut “Sicilian Crest”, the host asked the John Darnielle-led outfit to play “This Year” off 2005’s The Sunset Tree just so he could sing along.

Introducing the performance, Colbert said the band’s new record “is a great album, but this next song is not on that album, because I asked them to play this song for me because it’s one of my favorite songs of theirs.” As the Mountain Goats went into “This Year”, it seemed like it would be a straightforward rendition of a choice throwback track, until Colbert himself came bouncing onto the stage for the chorus. He took the second verse all by himself and traded off with Darnielle on the bridge, admirably keeping up with the singer’s unique lyrical cadence.


(Read: The 50 Most Outrageous Album Covers)

For the show proper, the band delivered the final tune off the Dungeons & Dragons-themed In League with Dragons, “Sicilian Crest”. With lyrics projected in ancient-looking brush hand script behind them, the four-piece worked through the tension-filled number, contrasting the powerful, melodious grand piano with Darnielle’s yearning vocal.

Watch both the web-exclusive “This Year” performance and “Sicilian Crest” below.

In continued support of In League with Dragons, the band will kick off the fall leg of their year-long tour at the end of August. Get tickets here.

Below, revisit Darnielle’s appearance on the one-year anniversary episode of This Must Be the Gig.