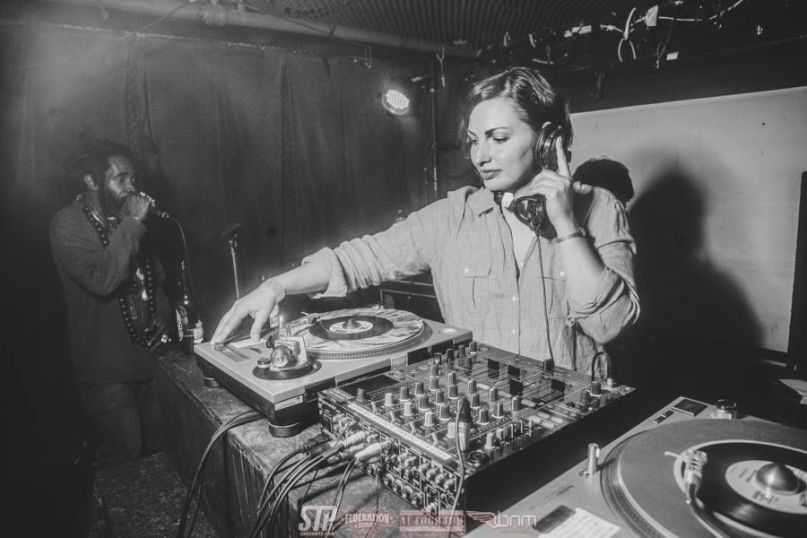 Throughout July and August, the Brooklyn location of The General by Vans will host The General Stereo, a pop-up radio station and photo show in partnership with Consequence of Sound Radio on TuneIn. Curated by the underground radio legends of Ballers Eve, the station’s lineup highlights New York’s vital musical subcultures, from throwback soul to hardcore to reggae. As The General Stereo broadcasts, we’ll profile a few of the DJs bringing this music to the masses. Next up: reggae DJ and indie hot sauce maker Queen Majesty.

“Quality ingredients [and] good balance,” she said. “Even if it’s just three ingredients [like] peppers, salt, and vinegar.”

This back-to-basics approach has paid off in the kitchen; since opening Queen Majesty Hot Sauce in 2013, she’s been written up everywhere from The Village Voice to Bon Appetit and Saveur, which declared her Scotch Bonnet and Ginger sauce one of the “13 hot sauces from around the world that deserve a spot in your pantry.”

Diehl’s intuitive understanding of cooking’s alchemical rhythms isn’t something that happened by accident; it’s something that she’s also honed during nearly two decades as one of New York City’s foremost reggae DJs. As Queen Majesty, Diehl hosted the long-running Jamaica Rock program on two of the city’s underground radio outposts and brought the sounds of the Caribbean to live crowds at parties and concerts both at home and abroad.

Although her days now mostly consist of expanding her burgeoning hot sauce empire, Diehl still makes time for her first, deepest love; when she received a message from Ballers Eve cofounder Jordan Merz about an opportunity to return to radio with The General Stereo, she didn’t need much convincing.

“I called back right away,” she said.

Once she had the full details, Diehl’s resolve to resurrect her radio show was even stronger, thanks in large part to the involvement of Vans, whose own identity matches up closely with the Queen Majesty commitment to quality.

“I love Vans,” she said. “They’ve kept their respectability as a major brand. They still support the fringe.”

The Coronation of Queen Majesty

When Diehl moved to New York City at the age of 17, she wasn’t yet Queen Majesty, the cultural force rich in exploits as both a reggae DJ and hot sauce maker. She was just Erica from Buffalo, another teenager looking for a place to fit in. For Diehl, that place was New York’s reggae scene, a community she’s now been a part of for 25 years. As with many musical discovery stories, radio was her gateway.

“I’d been familiar with Shabba Ranks and other mainstream stuff,” Diehl said, crediting reggae’s early ‘90s airplay resurgence for inspiring her to check out live events in her new city. From there, Diehl was hooked and soon amassed an enviable collection of LPs and 45s that later formed the backbone of her live sets throughout the ’00s and ’10s.

When asked what she’d do if she had to reduce this collection down to just five essential albums, Diehl was up to the task, adding: “If you’re learning about Jamaican music, this would be a great place to start”:

In crafting her playlists for The General Stereo, Diehl aims to find the same balance that she prizes in her hot sauces. In this case, that means weighing the thrill of discovery that she felt in those early days against the respect for hits whose quality isn’t dimmed by popularity.

“I try to keep it interesting for people that already know the music and people that are new to listening,” she said. “Of course, maybe some classics get played, but part of my job as a DJ is to find new interesting things that some people might not have heard.”

Becoming a Citizen of the Scene

Despite amassing fans and 45s during her time as a DJ, Diehl remains thoughtful about her relationship to the creators and culture of the Jamaican music scene.

Diehl is also eager to use her expertise to help introduce others to the New York reggae scene that welcomed her as a teenager in the ’90s.

“We’re spoiled in New York,” she said. “If you’re growing up in different music scenes here, you’re exposed to the best of the best. Everyone’s coming here. We’re very lucky.”

With that in mind, Diehl has a few recommendations for anyone looking for an entry point into the New York reggae scene beyond her sets on The General Stereo: browse the stacks at Brooklyn’s Record City to start a record collection of your own; then hit up resources like the label Easy Star Records and the website Power of Reggae for tips on the parties and live performances where the music shines best. While you’re doing so, Diehl also recommends taking a moment out to recognize the DJ’s role in bringing disparate tracks together into one big recipe for a good time.

“Even if a DJ plays the same exact playlist that you might find on Spotify, hopefully they’ll do it in a way that just adds a little bit more energy to it,” she said. “It can be as little as deciding where you stop one song and start another. Part of being a DJ [is] putting your own fingerprint on the music.”