Robin Is The Best Thing to Happen to Steve Harrington 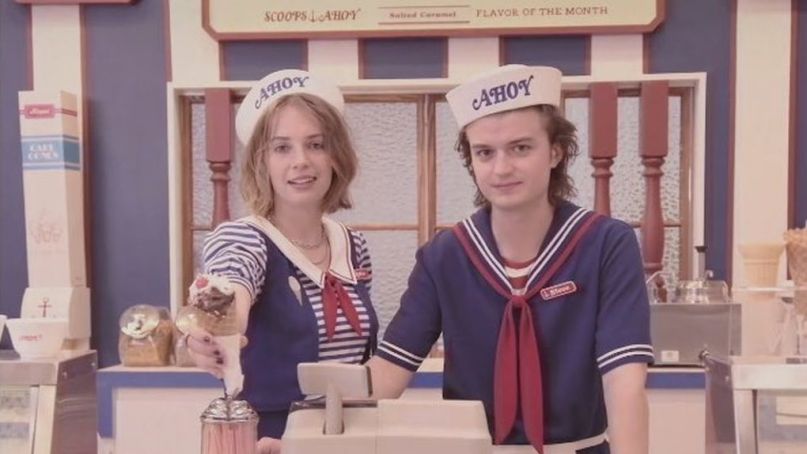 When the Duffer Brothers rehabilitated Steve Harrington (Joe Keery) in Stranger Things 2, pivoting his character from the smarmy jerk bully of the first season into the blustering idiot who taught Dustin Henderson (Gaten Matarazzo) how to pick up girls (kind of), they wisely realized they needed to give him a foil who would take none of his bullshit.

Enter Robin, Steve’s no-nonsense coworker at Starcourt Mall’s maritime-themed ice cream joint, Scoops Ahoy. Played by Maya Hawke, Robin is just as jaded as Steve, only she brooks none of his put-upon suave act and needles him in just the right way. Sure, she’s also scooping ice cream in an equally infantilizing sailor suit, but this menial job clearly bothers Steve, and she uses that knowledge to delectably vicious effect.

Because in Stranger Things 3, Steve Harrington’s humbling is complete. Now, he gets to build himself back up again to see what kind of man he’ll become, and his interactions with Robin play a vital role in that.

Of course, she also plays a vital role in the unraveling of the season’s ensuing mystery. Seemingly on her own, and with zero of the context that Steve, the Wheelers, the Byers, and the rest of the AV Club retain, Robin quickly sets about decoding a strange signal that Dustin intercepts early in the season. Did we mention she knows four different languages?

She does, and once she solves the great Yellow-Blue riddle that’s plagued Reddit since New Year’s Eve, she’s rolled into Steve and Dustin’s orbit. Together, the three — eventually, four, when Erica Sinclair (Priah Ferguson) tags along — investigate some of the, ahem, stranger things going on at the Starcourt Mall. Again, it’s a testament to the Duffers (and Hawke) at how quickly Robin is integrated into the broader narrative.

It’s like she’s been there from the very beginning.

And yet, it’s her outsider nature that sets her apart from the rest of the kids. In school, she was invisible to guys like Steve, though that doesn’t bother her for the reason you might not think. Seeing him humbled in this way, brought down to her level by the vagaries of retail employment and no college prospects, Robin sees a chink in his armor and the two bond. Hawke plays this with delicious elan and charisma,

As the season progresses, it seems clear at first that Robin and Steve are headed for a Romancing the Stone-esque romance, two like-minded and attractive people getting together in the face of extreme circumstances. But as their story draws to a close, and the pair recover from some Russian truth serum in a Starcourt bathroom (a la True Lies), we learn the real reason Robin resented Steve: his flirtations with a female classmate meant that she couldn’t make the same moves on her.

Robin’s queerness is certainly a subtle reveal (and, depending on how you read one scene with Will Byers, not the only revealing sexuality of a Stranger Things character this season), but a welcome one for a show that hadn’t tackled those issues before. Even more refreshing is Steve’s reaction: one of momentary surprise, then moving immediately onto resuming their friendship.

In other words, Robin isn’t stuck as a supporting player in Steve’s story; she’s not here to validate a man’s bruised ego. Instead, she’s a dynamic, three-dimensional person with her own wants and needs, and her being openly gay (or at least non-straight) in 1980s America probably makes her braver than any of the monster hunters around her.

All of Robin’s take-no-prisoners energy and her sardonic smirk in the face of danger is in debt to Hawke’s impressive, endlessly watchable performance. The daughter of Ethan Hawke and Uma Thurman, Hawke’s the spitting image of her mother, with a twinkle in her eye and wit to spare.

This isn’t her first acting job, either. Hawke debuted in 2017’s Little Women miniseries, though her turn as Robin will easily be seen as her true breakout role (as is, possibly, her part in Quentin Tarantino’s forthcoming Once Upon a Time in… Hollywood).

Sometimes, it’s hard to quantify the true mark of a future star — to put into words that X factor that can’t be described — but it’s impossible to ignore. Whether it’s genetics, talent, or some lucky combination of both, Hawke has the makings of genuine greatness. Whatever ‘it’ is, she has ‘it’, and we can only hope that Stranger Things is just the start of her much-deserved rise to prominence.

As for Robin, let’s hope she stays in Hawkins.

Previous Story
The Go Ahead fight against the grey areas of sexual abuse in video for “Falling Out Of Place”: Watch
Next Story
MAD Magazine to cease publication
Popular
More Stories
[fu-upload-form form_layout="media" title="Submit Your Photo"][input type="hidden" name="ugc" value="1"][/fu-upload-form]