Taylor Bennett and Femdot are “Singing the Blues” on Kimmel: Watch

A politically charged appearance about racism and government corruption 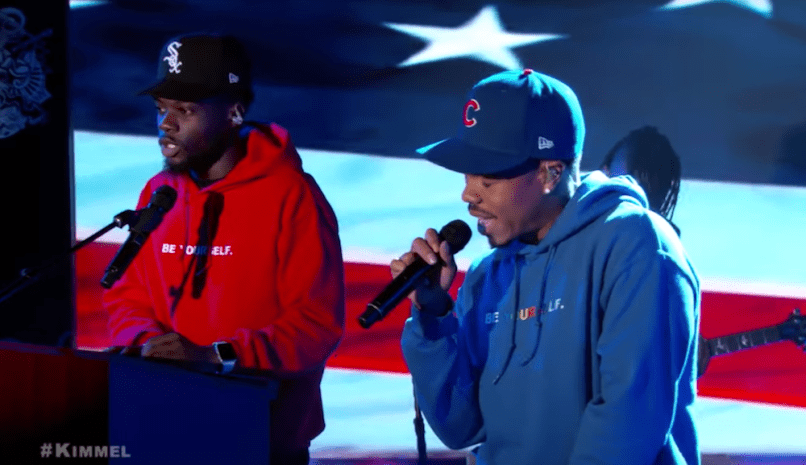 Femdot and Taylor Bennett on Kimmel

Taylor Bennett dropped a new EP titled The American Reject in May. The effort featured a number of guest contributors, including his own brother, Chance the Rapper. In support, Bennett performed one of its tracks, “Singing the Blues”, on Jimmy Kimmel Live on Thursday.

Bennett was assisted on stage by song collaborator and fellow Chicagoan Femdot. Keeping in theme with the track’s politically charged lyrics, the two MCs were made to look like politicians pontificating from a podium. The American flag also flashed behind them as they rapped about government corruption and racist police officers.

Both rappers wore clothes bearing the phrase “Be Yourself”, a nod to Bennett’s 2018 EP of the same name. That project dealt heavily with the subject of sexuality and encouraged the idea of living truthfully in the face of opposition (Bennett came out as bisexual the year prior).

Watch Bennett and Femdot on Kimmel below.

Bennett will spend the summer on the festival circuit, playing at Atlanta’s Music Midtown, Osheaga Festival in Montreal, and Sin City’s Life is Beautiful. Buy tickets to all of his shows here.