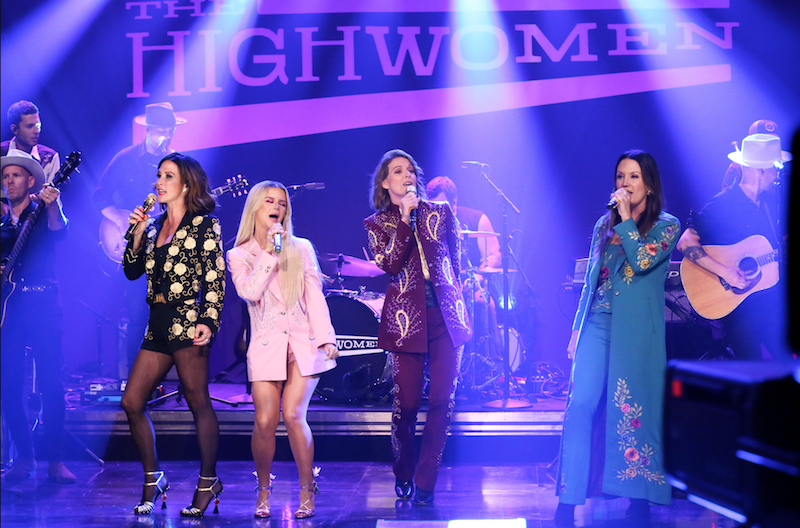 The Highwomen on Fallon, photo by Andrew Lipovsky/NBC

Over the weekend, country supergroup The Highwomen made their live debut with a jaw-dropping performance at Newport Folk Festival. Now the rest of the world gets to see what Brandi Carlile, Natalie Hemby, Maren Morris and Amanda Shires are like as a quartet, as they stopped by Fallon last night to sing their first single, “Redesigning Women”.

As if the song’s message weren’t powerful enough, there really is something special about hearing these women harmonize. The crowd certainly agreed, applauding every time they hit that chorus of “Redesigning women/ Running the world while we’re cleaning up the kitchen.” Singing to each other as much as the audience, The Highwomen were backed by a band featuring Jason Isbell and Carlile’s frequent collaborators the Hanseroth twins.

The group also performed new single “Crowded Table” for a web-exclusive, which you can watch along with “Redesigning Women” below.

For more looks at The Highwomen, check out our photo gallery and review from Newport Folk.

The group’s self-titled debut album is due out on September 6th via Low Country Sound/Elektra Records. Sheryl Crow and Isbell feature on the record, which also includes songwriting contributions from Miranda Lambert and Ray LaMontagne. Pre-orders for the collection are going on now.