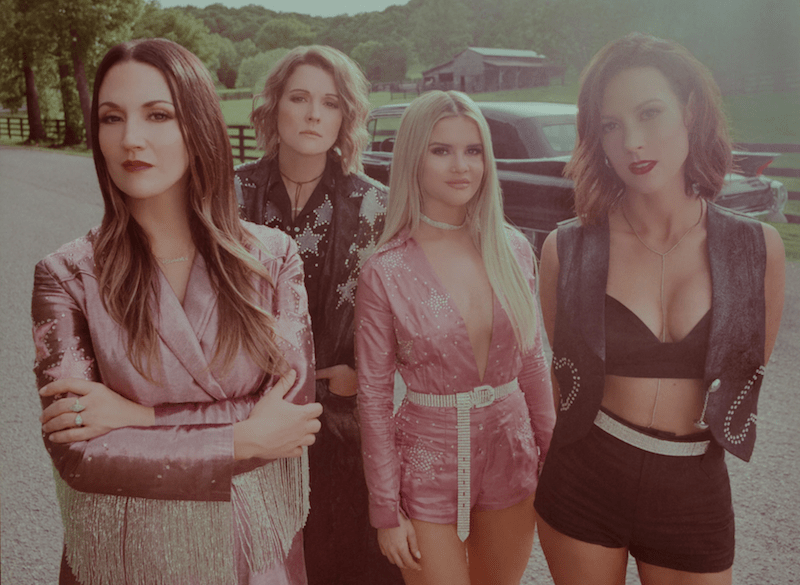 During the rollout of the 2019 Newport Folk Festival lineup, the name The Highwomen was an unrecognized but intriguing addition. It was the first time anyone had heard of the country supergroup featuring Brandi Carlile, Natalie Hemby, Maren Morris and Amanda Shires, an exciting collaborative project presented with little explanation. Today, we finally get our first taste of what The Highwomen will bring to Fort Adams. The group has shared their first single, “Redesigning Women”, and detailed their upcoming self-titled debut album.

“Redesigning Women” is an anthemic, catchy ode to the ever-changing role of women in society. It has all the makings of a country radio hit, but with a more inclusive and empowering bend. “A critical reason there’s a population/ raisin’ eyebrows and a new generation/ Rosie the Riveter, with renovations,” sing the quartet. “And always gets better with wine.”

The track comes with a music video directed by Elizabeth Olmstead and featuring a long list of guest appearances. As the Highwomen themselves build a bonfire out of the trappings of gendered identity, they’re joined by Wynonna Judd, Kassi Ashton, Raelynn, Cassadee Pope, Lauren Alaina, Natalie Stavall, Hailey Whitters, and others. Watch the clip below.

“Redesigning Women” is the first track off The Highwomen, the supergroup’s debut album due out September 6th via Low Country Sound/Elektra Records. Produced by David Cobb, the record reflects the idea that The Highwomen is more about a movement of inclusivity than a band in and of itself. As such, there are a number of female and male guest performers, including Sheryl Crow (background vocals, bass), Jason Isbell (acoustic/electric guitar), Yola (vocals, background vocals), Cobb (acoustic/electric guitar), Carlile’s frequent collaborators Phil and Tim Hanseroth, Chris Powell (drums), and Peter Levin (piano and keyboards).

In addition to tracks written by the core foursome, Isbell, the Haneswroth twins, Rodney Clawson, Lori McKenna, Miranda Lambert, Ray LaMontagne, and others contributed songwriting to the project. Jimmy Webb — who penned the original “Highwayman” famously sung by Johnny Cash, Waylon Jennings, Willie Nelson, and Kris Kristofferson — helped the Highwomen re-write the classic song with female characters. “We rewrote it with fates that befell women: a doctor convicted of witchcraft; an immigrant who died trying to get over the border but got the kids over safe and sound; a preacher; and a freedom rider who gets shot,” Carlile told Rolling Stone.

Pre-orders for The Highwomen are available through the project’s webstore. $4 from each merch bundle sold will go to She Is the Music, a nonprofit seeking to transform the music industry by pushing for equality for women.

The Highwomen currently have just one performance scheduled, and it’s at the Newport Folk Festival, which takes place next weekend from July 26th-28th. Carlile will also curate the long-running festival’s first all-female headlining set, currently being billed as ♀♀♀♀: The Collaboration. Find tickets to the fest here. Also be sure to tune into our live stream of NFF on CoS Radio on TuneIn.