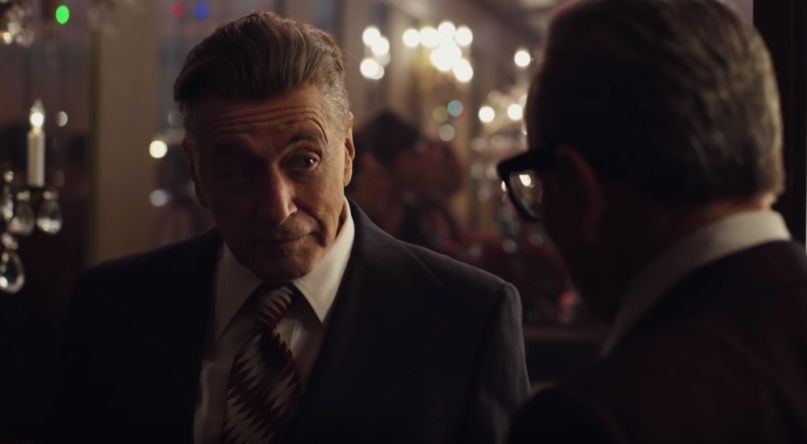 Al Pacino in The Irishman (Netflix)

Netflix has shared the first real trailer for Martin Scorsese’s The Irishman. The two-minute clip comes only days after the streaming giant let loose the first couple of images from the movie, and announced it would debut at this year’s New York Film Festival.

Once again, the highly anticipated crime drama stars Al Pacino, Robert DeNiro, and Joe Pesci. As previously reported, half of the movie will feature de-aged versions of Pacino, DeNiro, and Pesci, and you can certainly see how that works in the trailer below.

(Read: The 10 Most Anticipated Directorial Follow-Ups of 2019)

As previously reported, The Irishman centers around hitman Frank Sheeran (DeNiro) and Jimmy Hoffa (Pacino), as told in Charles Brandt’s 2005 non-fiction novel, I Heard You Paint Houses…. Steven Zaillian adapted the story for the screen.

In addition to the aforementioned, the film also stars Harvey Keitel, Jesse Plemons, Anna Paquin, Bobby Cannavale, and Ray Romano. The film is expected to drop on Netflix following its world premiere at the festival.