In the latest trailer, Cruise's jacket no longer features the Japanese and Taiwanese flags 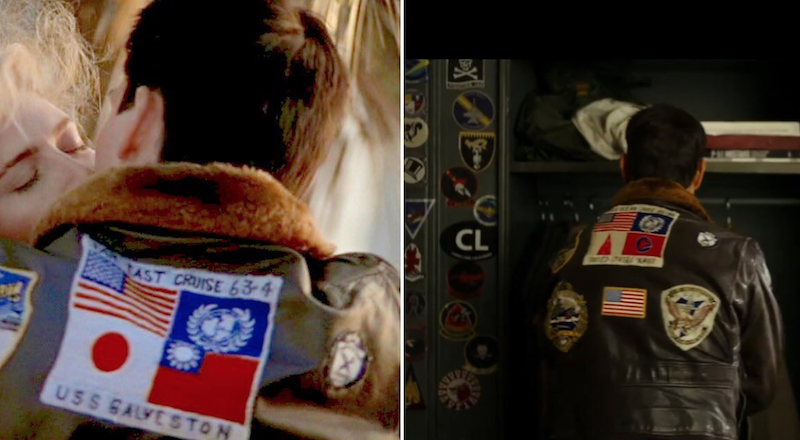 Last week saw Tom Cruise suit up and finally take flight again in the first trailer for Top Gun: Maverick. But while he’s back to reprise his role, not everything is the way it used to be for Lieutenant Pete “Maverick” Mitchell. The patch on his signature leather jacket has been changed, and fans are speculating the fashion alteration was made in order to keep China happy.

In the original Top Gun from 1986, Maverick’s jacket had a patch featuring the Japanese and Taiwanese flags. However, his new updated patch is noticeably without both flags, their spots now replaced with unidentifiable symbols.

“There’s a new Top Gun movie coming out. And Maverick is wearing the same leather jacket — only this time it’s Communist Party of China-approved, so the Japanese and Taiwanese flag patches are gone (screenshot on right is from the new trailer),” wrote The Globe and Mail correspondent Mark MacKinnon, one of the first to spot the difference in patches.

Upon further research, MacKinnon pointed out that a good chunk of the new film’s production money comes courtesy of China-backed companies. Alongside Paramount Pictures, Tencent Pictures and Skydance Media are both listed as co-producers, and both happen to be owned by Tencent, a massive internet conglomerate based in China.

There’s a new Top Gun movie coming out. And Maverick is wearing the same leather jacket – only this time it’s Communist Party of China-approved, so the Japanese and Taiwanese flag patches are gone (screenshot on right is from the new trailer)… pic.twitter.com/gUxFNFNUKX

MacKinnon, as well as many Top Gun fans, believe that China’s heavy involvement in the film is the reason for the wardrobe update. The country notably has had strained relations with both Japan and Taiwan.

China and Japan have long been competitors, especially as the former has skyrocketed to become a major world power in the last few decades. China’s history with Taiwan is similarly complicated. Taiwan is officially listed as part of The Republic of China, and economically depends on the the country, however, many of its citizens have lobbied for full independence.

If Paramount did, indeed, censor the patch for China’s sake, it wouldn’t be the first time Hollywood has kowtowed to the country (and its huge market). As The Hollywood Reporter noted, it’s been well over 20 years since a mainstream film has openly critiqued China.

Per THR, there could be another explanation for Maverick’s new patch, though, and one that doesn’t necessarily entail the ruffling of political feathers,

The original patch is said to be from Maverick’s father’s Vietnam tour. The new patch appears to say “85-86” along with the words “Indian Ocean Cruise,” which was where the dogfights in the original Top Gun took place. Perhaps, by 2020, Maverick’s sartorial shout-outs are more about paying tribute to his own glory days.

It’s 2019 and anything is possible. Cruise could have a UFC showdown with Justin Bieber, so why can’t Maverick don a China-approved jacket?