Ceremony Find Firm Footing on In the Spirit World Now 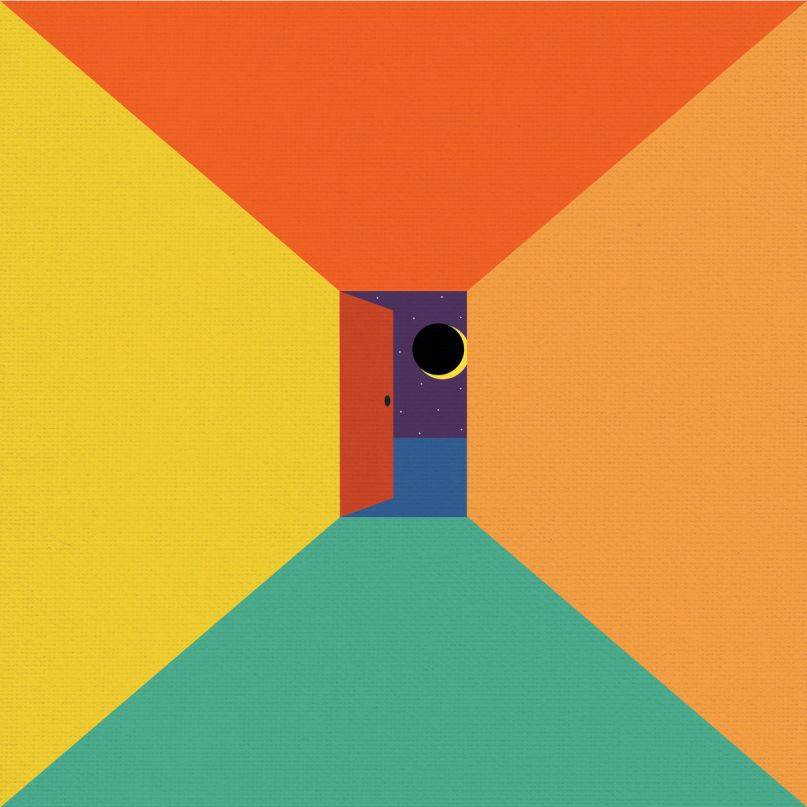 The Lowdown: Since 2004, Ceremony have worn many hats. Though they changed their name before the release of their official debut, the group was originally known as Violent World, a moniker that, at the time, clearly telegraphed their intentions. Ceremony’s first album, 2006’s Violence Violence, is composed of 20 songs that clock in at 20 minutes total. They trafficked enthusiastically in “powerviolence,” which is to say that they ripped hard and they ripped fast. It’s probably unfair to review an album released in 2019 through the lens of an album (albeit by the same band) released in 2006. For that reason, I’ll cut the comparison here, but Ceremony’s history is important, especially because In the Spirit World Now feels like the culmination of a trajectory set in motion a decade and a half ago. Ceremony were founded in the violent world, and they’ve finally arrived in the spirit world.

Like the sonic landscape of the record itself, the scene depicted on Spirit World’s cover is angular, but vibrant rather than brutal. A color-block corridor beckons us to follow Ceremony through a door left ajar at the end of the hallway, where nothing but the titular spirit world could possibly await. If Ceremony’s new environment is an unfamiliar one, then Spirit World gives us a window into their search for enlightenment through all the strangeness. Throughout, vocalist Ross Farrar strives to reconcile the coexistence of mortality and the relationships existing between humans and the people and things that surround them. What we could call the band’s mission statement is glossed over in “Years of Love”, where Farrar declares: “You have to ask why/ Interrogate what you love.”


The Good: For a band that’s always trying something new, Ceremony have managed to craft a record that’s consistent but not tiresome. Spirit World’s sonic aesthetic toes the line between post-punk and psych-rock, relying on full-bodied percussion for its momentum, which feels intentional if skittish at times. In this way, Ceremony’s latest stands in contrast to their 2015 effort. The L-Shaped Man, which drew comparisons of mixed favorability to Joy Division (actually, Ceremony’s namesake is a Joy Division/New Order song of the same name), put Jake Casarotti’s drum work slightly further back in the mix while opting for a more sweeping, less punctuated sound.

Lyrically, Farrar’s struggles to understand the self make for a worthwhile close reading. Oscillating between interpersonal relationships and headier, sometimes ostensibly naive truths, he makes some personal sense of it all by the end of Spirit World’s 32 minutes. Along the way, he is provided assistance by poet Brooks Haxton, whose reading of Farrar’s poem “ California Jungle Dream States End” is interspersed between tracks. Farrar’s most potent reflections appear where interpersonal and universal intersect. On “From Another Age”, he sings, “The people I left behind/ They were my destiny.” On the album’s title track, “Desire/ It’ll never stop/ You just go/ You escape into the blue room now/ There lies/ All that you’ve done.”

The Bad: So much of Spirit World is Farrar grappling with what he should do, wants to do, and needs to do. It’s almost dizzying, which maybe means he’s done a good job of conveying the feeling of being helplessly smaller than the massive system of things that he’s trying to figure out. Either way, the high-concept leanings of Spirit World, at times, threaten to overpower and alienate. Especially if you’re not convinced of the image of Farrar humbly and honestly setting out to fit the pieces of everything together, large stretches of the album will likely read as pretentious and indulgent. Similarly, declarations like “in the spirit world now” and “turn away the bad thing” don’t really benefit from repetition seemingly ad infinitum on their namesake songs. Instead, whatever profundity they might have contained is bludgeoned into an inexact mush.

The Verdict: The four years that Ceremony took off between their last record and Spirit World have paid off. The product of their patient efforts is a record that’s as compact as it is consistent. Across its relatively short runtime, the band still find plenty of time to jam and drone, evincing their commitment to their newly adopted psych-rock aesthetic. Perhaps a holdover from their powerviolence days, Ceremony’s adherence to traditional song structures is casual at most. Instead, Farrar’s vocals and the rest of the band are tied up in a tightly codependent relationship, determining one another rather than subscribing to the verse-chorus-verse cookie cutter. While Farrar’s restlessness seems authentic, he sometimes gives the impression of someone who’s lost track of himself, barking truths so obvious that they fall flat when said aloud. Still, Spirit World rewards repeat listens, a dense full-length on which a band with an ever-shifting identity finds a firm foothold, at least for now.

Essential Tracks: “In the Spirit World Now”, “From Another Age”