Violent Femmes Get Political yet Uninspired on Hotel Last Resort 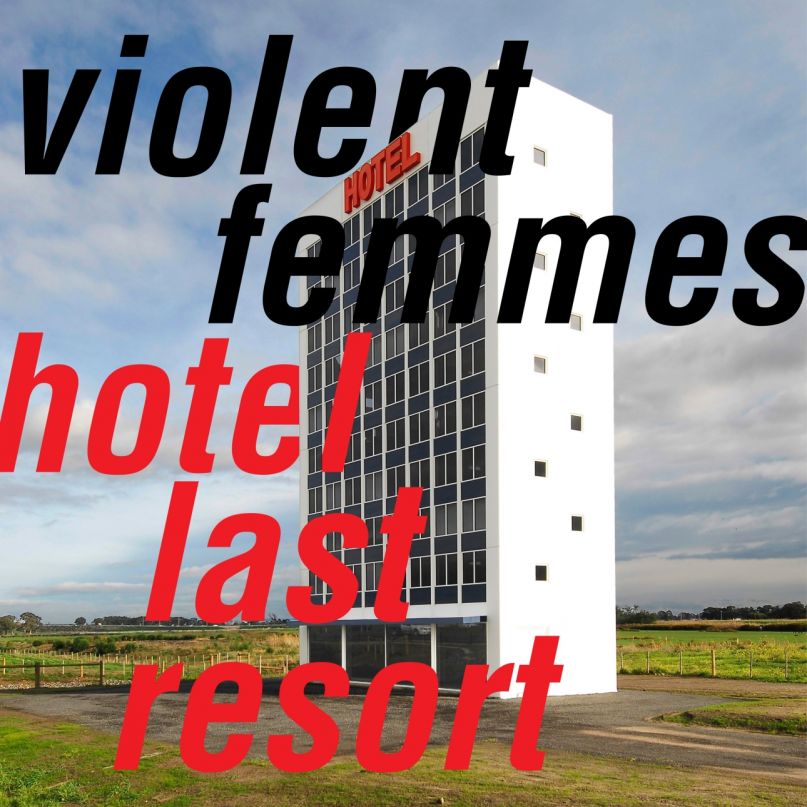 The Lowdown: Almost 40 years on from heralding the dawn of modern folk-punk with their self-titled debut, Violent Femmes remain something of a sonic law unto themselves. In fact, long resistant to second-guessing, the Milwaukee trio’s whole M.O. could be distilled to wielding idiosyncrasy in tandem with pure accessibility. Often, the further out Gordon Gano and co. have dared to go, the more inviting their shape-shifting craft has felt. The follow-up to 2016’s patchy We Can Do Anything, album number 10, Hotel Last Resort, ultimately struggles to resurrect that trend of yore. The odd gem here can’t undo weak points on a record that fails to break new ground and almost overstays its welcome.

The Good: For every two or three throwaway songs, Hotel Last Resort delivers some much-sought reprieve. Bassist Brian Ritchie recruiting Television frontman Tom Verlaine for the title track was an inspired move: understated as ever, his motifs marry well with Gordon’s absurdist turns-of-phrase and the song’s quasi-country surrealism. “I Get What I Want”, meanwhile, is an earworming peak early on. Melding rousing lyrical refrains with snaking, three-part vocal harmonies that burrow deep, it’s second only to the sublime “Paris to Sleep”. It’s a skeletal ode to simple sanctuary that, if nothing else, is testament to the Femmes’ capacity to muster something special from unfussy arrangements.


While other, more politically minded efforts, including “I’m Nothing” and “Not Okay”, miss the mark completely, a closing take on Irving Berlin’s “God Bless America” proves — against all odds — another rare highlight. Let’s face it: choosing to tackle a composition so esteemed is brazen in and of itself, but to do it justice in the ilk of tone-shifting, politically pointed folk-punk is commendable at the very least.

Bad: Admittedly, to accuse Violent Femmes for not trying – or not trying hard enough – in 2019 couldn’t feel more redundant. After all, this is a band who have, in three iterations, spent the last four decades instinctively flaunting convention in favour of defining their own self-contained worlds. On Hotel Last Resort, however, the thin line between brilliant and barren has never seemed slighter. Lyrically, holding a mirror up to themselves and the songwriting process fails to come off as intended. From “Hotel Last Resort” (“I don’t change the chords any more/ The chords change by themselves”) and “Not Okay” (“I could write something better in my sleep/ I could sing so pretty it would make your heart weep”) to self-referential misfire “Another Chorus”, the band mar what could have been sharp, meta nods by almost plummeting headfirst into sub-Sesame Street self-parody.

And while many dyed-in-the-wool fans will see the offbeat value in their myriad tangents, “Sleepin’ at the Meetin’” and “I’m Nothin’” (“Are you a Republican or a Democrat?/ A liberal fascist full of crap?/ I’m nothin,’ I’m nothin’”) bound forth with all the intent and invention of the most disposable B-side. Violent Femmes are clearly enjoying themselves, and that’s important, but the indifference threaded throughout album number ten only serves to bring into sharp focus the distinct lack of headway here.

The Verdict: Despite Brian Ritchie’s recent claim that it’s a “classic” Violent Femmes album, Hotel Last Resort is largely regurgitative. Much like, say, Meat Puppets’ attempts to rekindle the heady flair of their heyday via Dusty Notes earlier this year, the band’s goofy-yet-relatable shtick plays second fiddle to creative ennui. Where earlier efforts such as Hallowed Ground saw the band command sparse irreverence, Hotel Last Resort, much like We Can Do Anything, won’t generate much excitement. At their best, Violent Femmes haven’t lost their touch at burrowing deep, and Gano’s vocals miraculously haven’t changed since their first album, but if you’re an absolute beginner, steer clear. One can’t help but foresee Violent Femmes releasing another great album. For now, though, Hotel Last Resort isn’t it.

Essential Tracks: “I Get What I Want”, “Paris to Sleep”, and “God Bless America”