Whitney Tap into a Beautiful Wistfulness on Forever Turned Around

A beautiful collection of songs about love, loss, and struggling to leave the past behind 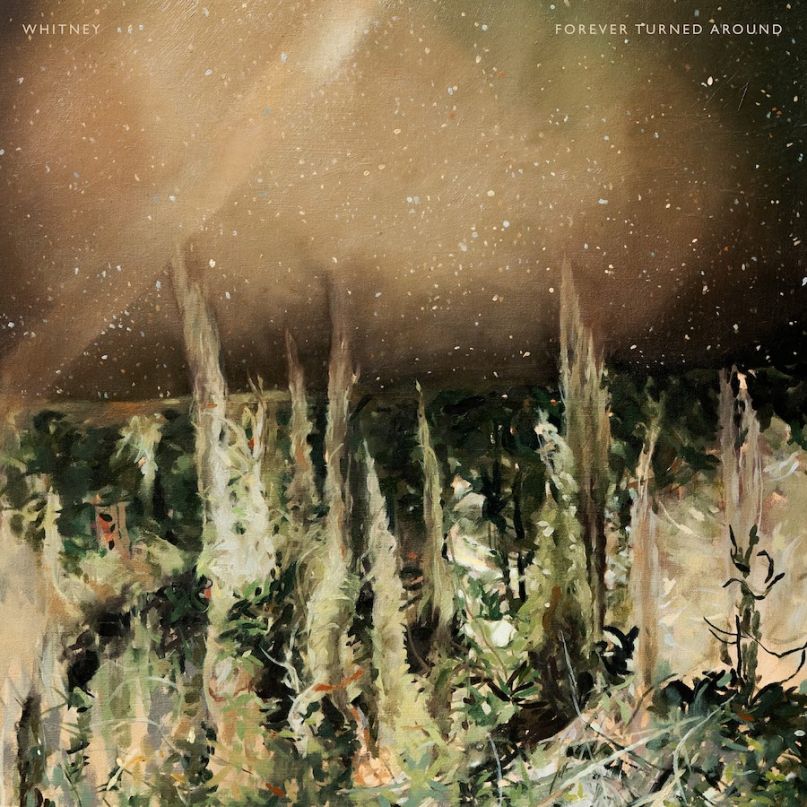 The Lowdown: When Julien Ehrlich and Max Kakacek formed Whitney shortly after the dissolution of their previous band, Smith Westerns, few expected that in just a couple short years they would eclipse the stature of their former outfit. At last month’s Pitchfork Music Festival, they played a prime Sunday evening slot that legendary artists like Pusha T and Stereolab filled on other nights, accompanied by special guests like Snail Mail’s Lindsey Jordan and Soccer Mommy’s Sophie Allison. Coinciding with the release of their second album, Forever Turned Around, Mayor Lori Lightfoot proclaimed August 30th Whitney day in Chicago, and even if it’s largely ceremonial, remember that took until 2018 for Travis Scott to get the city of Houston to name a day in his honor.

Whitney’s debut record was a magnetic blend of indie rock and homegrown soul, a slice of easy listening that immediately drew in fans of ‘70s AM rock. Forever Turned Around basks in the glow of its predecessor, drawing deeper from jazz and soul, finding Ehrlich and Kakacek growing as songwriters and musicians. A collection of songs about love, loss, and struggling to leave the past behind, the album is filled with a wistfulness steeped in the golden haze of sunset, where everything moves a little slower and hits a little harder.


The Good: Just as he found the perfect sweeping riffs to play in Smith Westerns, Kakacek’s guitar is the driving soul of Forever Turned Around. Between his swooning riffs of “Valleys (My Love)” and the melting slide he plays on “Friend of Mine”, his restrained playing is what grounds these songs. Building off of that foundation, Will Miller’s horns and a string section played by musicians Macie Stewart, Lia Kohl and Whitney Johnson open up the songs, swelling and fading in precisely the right moments. The band has grown more confident in their own abilities and more in sync with each other, especially on moments like the tender “My Life Alone,” where the complex arrangements come together beautifully, or on the instrumental “Rhododendron”, a standout where Kakacek’s guitar and Miller’s saxophone bounce off each other in a dizzying dance.

As technically proficient as the players are, it’s the beating heart at the core of these songs that make the album so moving. Ehrlich’s melodies have never been as magnetic as on songs like “Before I Know It”, where he stretches out the phrase “I’ll be gone” into a deep pain, clinging at the desperation and regret of each syllable. There’s a subtlety at play here, from the deceptively simple lyrics to the restraint of the guitar riffs and the way that the arrangements of horns and strings never overwhelm, that makes each song ring out. The passion that Ehrlich brings to a line like “I feel like I’ve been holding on to a place in your heart that’s long gone” on “Valleys (My Love)”  conveys an extreme longing. Whitney don’t try to articulate a broad array of feelings throughout the album, but by zeroing in on a rose-colored remembrance, they tap into something beautifully resonant.

The Bad: Forever Turned Around is a record of fond memories, trying to hold onto something that’s passed and can’t come back. The songs sit with a soft melancholy, with songs so effective at conjuring the fleeting warmth that comes from a glimpse of what used to be. It’s something that is hard to sustain, and at under 33 minutes the album is the perfect length to not overstay its welcome. With that, songs like “Day & Night”, written about the trials of touring and being on the road all the time and the strange satisfaction when one ends, feel a little slight by comparison. A couple of hooks on songs like “Used to Be Lonely” or “Giving Up” tend to blur together, but in a way that makes the record breeze by.

The Verdict: Forever Turned Around is a bold accomplishment by Whitney, the perfect record for the nights where summer turns to fall, and after a beer or two, you fill with memories of what could have been. Ehrlich and Kakacek are perfectly in tune with each other, evoking ache and yearning on every note. If the record is not as immediately grabbing as Light Upon the Lake, it’s because it’s a slow burn, driven by a deep desire that blooms into a heart-wrenching splendor.