Young Thug Shines on Lighthearted Debut So Much Fun 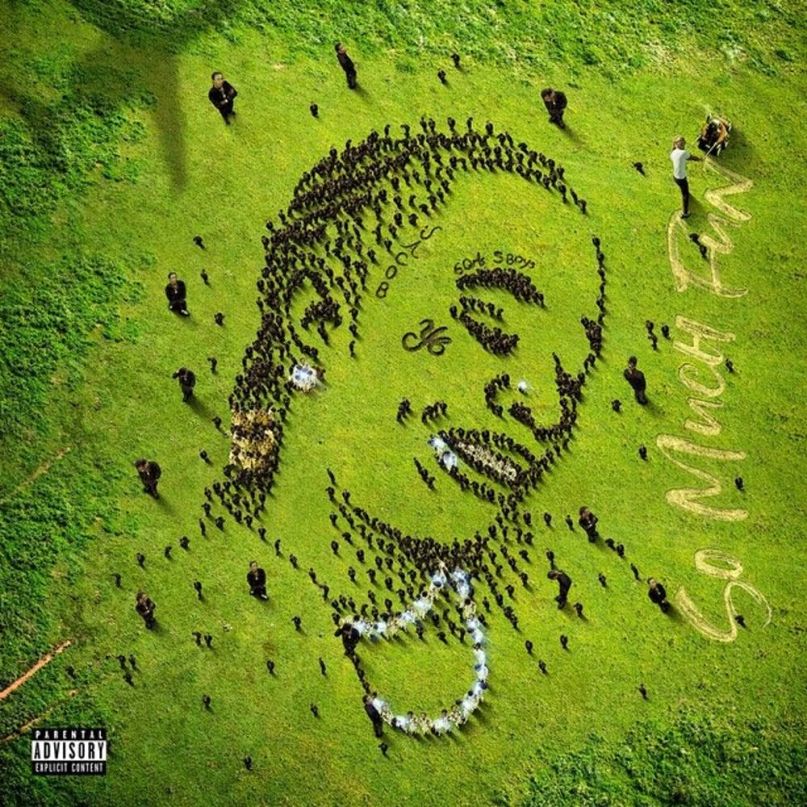 The Lowdown: Atlanta trap legend Young Thug makes the most interesting man in the world look like an accountant named Jim who drives a 2006 Toyota Camry. According to a 2014 GQ piece, in the earliest stages of his career, he owned almost nothing but a few shirts and rotten teeth. He hates food, goes days without eating, but gets monthly vitamin shots for nutrients. He barely sleeps, staying up for days and then crashing for 24-48 hours. He’s sat in interviews without saying a word; he’s left in the middle, boarded a jet, and flown away. He’s also a fashion icon, a man who can unequivocally rock a pair of skinny jeans with women’s uggs while also exuding a presence, a level of sophisticated chicness that most of us could never even attempt to replicate.

And at the heart of it all, he’s a massive music mogul, an influencer in the fundamental sense, a man who raps lyrics like “I’m gone kill your friend do it smart/ Even though it’s a sin” and also has a No. 1 single with Camila Cabello and a feature next to 12-year-old yodeler Mason Ramsey. He’s impossible to figure out and yet leaves everyone desperate to do so, which explains why all eyes are on So Much Fun, his newly released debut album.

The Good: Almost immediately, Thug proves that the straightforward album title So Much Fun  is neither frivolous nor an open invitation; it’s a command. When those initial ad-libs ring out, they inject a steady stream of endorphins through your headphones, making happiness unavoidable. Its true that making a “fun” album is not exactly a momentous feat, but creating one with this level of precision and individuality is.

As usual, Thug’s delivery is seamless, his recognizable, high-pitched tone grinding against the lively production. There are very few dull moments on the album, largely due to the vast distinctions between each of the beats. The project was executively produced by J. Cole, which in part explains why “Hot” sounds like if “MIDDLE CHILD” were reworked to be a part of the Game of Thrones soundtrack. One of the most unadulteratedly enjoyable tracks is “What’s the Move”, where the beloved Lil Uzi Vert and Thug are backed by chirping birds. It sounds like the kind of Hawaiian-shirt-of-a-song DJ Khaled was attempting to make with “I’m the One”, except it’s actually good.

Only Thug could be regarded as simultaneously an excellent lyricist and someone devoid of all desire to enunciate. It is clear, however, that throughout So Much Fun, the lyrics are goofy and enjoyable, with Thug never taking himself too seriously. At the beginning of the second track, “Sup Mate”, he and Future teach us how to pack a picnic: “Got cake mate?/ Got cheese mate?/ Got bread mate?/ Got cups mate?” The lack of overt somberness doesn’t seem sloppy; instead, it seems to showcase how easy it is for Thug to create an entirely non-redundant album without ever really honing in on an actually serious subject.

Unlike many other feature-heavy releases this year, Thug doesn’t rely on the presence of others to hold down each song; his performance actually stands alone. He undoubtedly controls each of the 19 tracks, radiating an almost fatherly energy amid the album’s other occupants. This makes sense considering a majority of the features are from long-time collaborators, many of whom are younger than the 28-year-old and were largely influenced by his work to begin with.

“Circle of Bosses” is possibly Quavo’s best feature this year, and Lil Baby sounded so good on “Bad Bad Bad” that Thug named the next song after him like he did in the JEFFREY days. But perhaps the duo with the most equal power dynamic is he and fellow-Atlanta native and SUPER SLIMEY-collaborator Future, who pass the torch back and forth for the four minutes of “Sup Mate”, their verses blending into each other without a second thought. Other combinations lack this balance but still work. Later, on “I’m Scared”, 21 Savage holds his own: “Book me for a show/ I put a glock on my rider,” he says in one of the best lines on the album. But the beat is clearly more suited to Thug’s cadence, with Savage sounding like he’s trying to squeeze himself into a tiny box (maybe from a pair of Thug’s shoes — he’s 6’3’’ but just a size 8.5). Although he doesn’t sound entirely like himself, Savage’s performance still feels successful, buoyed by Thug’s guidance.

The Bad: At times, the playful and high-spirited lyrics push the elastic boundaries of fun and reach borderline ridiculous. This is most prevalent on “Ecstasy”, where the repetitious lyrics exclaim, “Molly, Roxies, Oxycontin, Jubilee, Ostrich (Uh-uh).” It’s not unbearable, but the track doesn’t quite pull off the carefree exuberance as well as the others. And while the majority of the guests on the album are held up by Thug’s impenetrable presence, for some, it doesn’t come quite as easily. Lil Duke seems to struggle to hang on during “I Bought Her” and “Cartier Gucci Scarf”; perhaps he needs a little more parental guidance before he can fully leave the nest. It doesn’t necessarily interrupt the hour-long joyride fully, but it does act as a speed bump.

The Verdict: So Much Fun succeeds in its quest to highlight the success of Young Thug; almost all of the 19 tracks could stand alone as a strong demonstration of what Thug does best, but they also work together to create a cohesive project. The record isn’t exactly groundbreaking because Thug doesn’t introduce concepts we don’t already expect from him, but instead it proves that everything that other artists seem to be struggling with comes easily to Thug. He flaunts his ability to create an album that succeeds without succumbing to being full of mind-numbing radio hits. He keeps the album interesting, actually managing to maintain listeners’ attention for an entire hour. He represents his hometown not by resorting to corny shout-outs but by including artists actually from Atlanta. He also selected those guests based on their musical chemistry and ability to fit into the album, not for clout or simply to have a big name on the record because he can. And more so, he manages to do all of this without ever enunciating a single word.