Isaac Perlmutter has reportedly given over over $363,400 to Trump reelection efforts 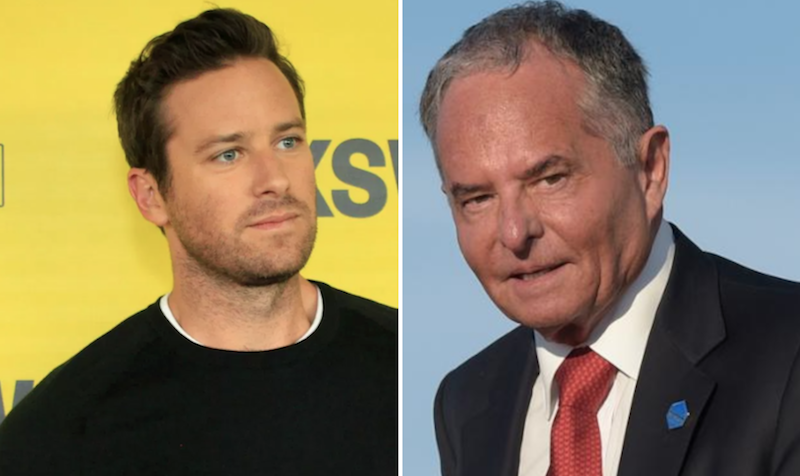 Amid boycotts of Equinox and SoulCycle over owner Stephen Ross’ political ties, Armie Hammer is reminding everyone that there’s another beloved mega-company with similar connections. On Twitter, the Call Me by Your Name star called out Marvel Entertainment chairman Isaac Perlmutter for using his deep pockets to support President Trump’s re-election.

“Hey, while everyone seems to be on this Equinox thing, it might be a good time to mention that one of Trump’s largest financial contributors is the chairman of Marvel Entertainment (Isaac Perlmutter),” Hammer wrote, adding, “jussayin.”

The actor isn’t wrong. Perlmutter is known to have given as much of his $5.2 billion fortune to the 2020 Trump campaign as he possibly could. According to Huffington Post, that includes a maximum $2,800 personal donation and the $360,000 maximum contribution to the political action committee Trump Victory, a number Perlmutter’s wife, Laura, also matched. (They also gave a reported $2 million to Marco Rubio’s 2016 presidential campaign.)

Perlmutter is also believed to have a shadowy influence on the Department of Veterans Affairs. He donated $1 million to Trump’s 2016 veterans fundraiser and apparently “secretly shaped” some of the related policies during numerous dinners with Trump at Mar-A-Lago (via ProPublica).

Now, before you go boycotting Phase 4 of the Marvel Cinematic Universe, note that Perlmutter actually has no real connection to Marvel Studios. He was the Marvel Entertainment CEO back when Marvel Studios was under its purview, but Kevin Feige wrestled the movie house from his control in 2015. Feige and Perlmutter reportedly frequently clashed, especially over the latter’s resistance to diversifying their superhero slate; Perlmutter apparently held up Black Panther and the Black Widow solo film, and forced the main villain of Iron Man 3 to be changed from a female to a male character. Feige and Marvel Studios now report directly to Disney Chief creative office and co-chairman Alan Horn.

As chairman of Marvel Entertainment, Perlmutter is more connected to the Marvel Television (think Agents of S.H.I.E.L.D. and the Netflix shows, R.I.P.) and Marvel Comics wings. That’s still probably an uncomfortable realization for some diehard Marvel fans, but at least the Disney+ MCU shows will be free of his influence.

So the big question: Does Hammer’s call-out earn him favor from a Feige-run Marvel Studios, or is it a late bid to nab that Batman role back from Robert Pattinson?

Hey, while everyone seems to be on this Equinox thing, it might be a good time to mention that one of Trump’s largest financial contributors is the chairman of Marvel Entertainment (Isaac Perlmutter)….. jussayin.