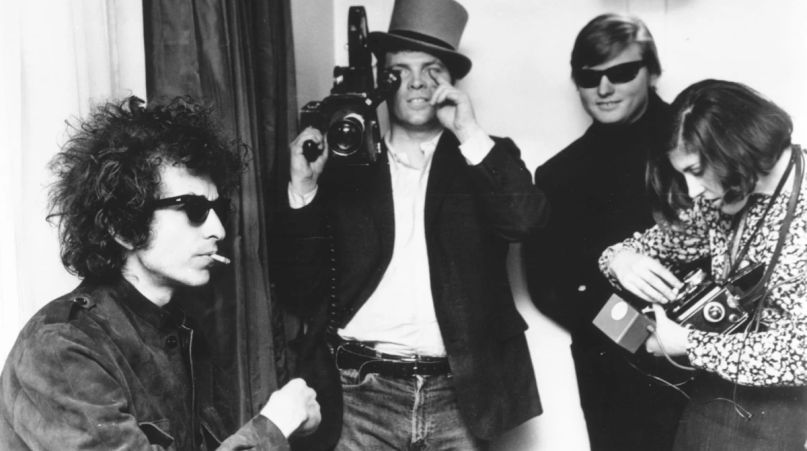 D. A. Pennebaker with Bob Dylan

D.A. Pennebaker, the Oscar-winning director and cinematographer behind many iconic music documentaries and concert films, including Bob Dylan’s Dont Look Back, David Bowie’s Ziggy Stardust and the Spiders from Mars, and Monterey Pop, has died at the age of 94.

According to Variety, Pennebaker passed away from natural causes on Thursday, August 1st.

A native of Evanston, Illinois, Pennebaker served in the Navy during WW2 and then studied engineering at Yale University. In the early 1950s, inspired by experimental filmmaker Francis Thompson, Pennebaker began to make his own movies. His first, 1953’s Daybreak Express, was a five-minute short of the soon-to-be-demolished Third Avenue elevated subway station in New York City, set to a recording of Duke Ellington’s recording of the same name.

In 1959, he joined the Filmakers’ Co-op collective and began shooting political films on behalf of ABC News and Time-life. Their collective’s first production, 1960’s Primary, documented John F. Kennedy and Hubert Humphrey’s campaigns in the 1960 Wisconsin Democratic Primary election. It was the first film to offer a comprehensive look at the day-by-day operations of a presidential race, and was later selected as a historic American film for inclusion in the Library of Congress’ National Film Registry.

In 1963, Pennebaker caught the attention of Bob Dylan after making a film about jazz vocalist Dave Lambert. Dylan’s manager, Albert Grossman, approached Pennebaker about documenting Dylan’s 1965 concert tour in England. The result, 1967’s Dont Look Back, is widely considered one of the greatest music documentaries in history, and was later selected for preservation in the United States National Film Registry by the Library of Congress as being deemed “culturally, historically, or aesthetically significant.” The film’s iconic opening scene, which depicts Dylan holding a selection if cue cards bearing lyrics from his song “Subterranean Homesick Blues”, also served as its music video.

In the wake of Dont Look Back, Pennebaker was hired to document the 1967 Monterey Pop Festival. His film, 1968’s Monterey Pop, featured performances from The Jimi Hendrix Experience, Otis Redding, and Janis Joplin. It too has been preserved by the Library of Congress.

In the following years, Pennebaker became a go-to documentarian for a number of other music legends, including John Legend and Yoko Ono (1971’s Sweet Toronto), David Bowie (1973’s Ziggy Stardust and the Spiders from Mars), and Depeche Mode (1989’s 101).

The second half of his career saw Pennebaker collaborate on a number of films with his husband, Chris Hegedus. In 1992, their documentary on Bill Clinton’s presidential run, War Room, received an Academy Award nomination for Best Documentary Feature. In 2000, the pair helmed Down From the Mountain, a documentary and concert film about the artists who participated in the soundtrack recording for Coen Brothers’ O Brother, Where Art Thou?. In 2010, hey directed a YouTube live webcast of The National performing at the Brooklyn Academy of Music.

For his efforts, Pennebaker was honored with a lifetime achievement award at the 2013 Oscars.