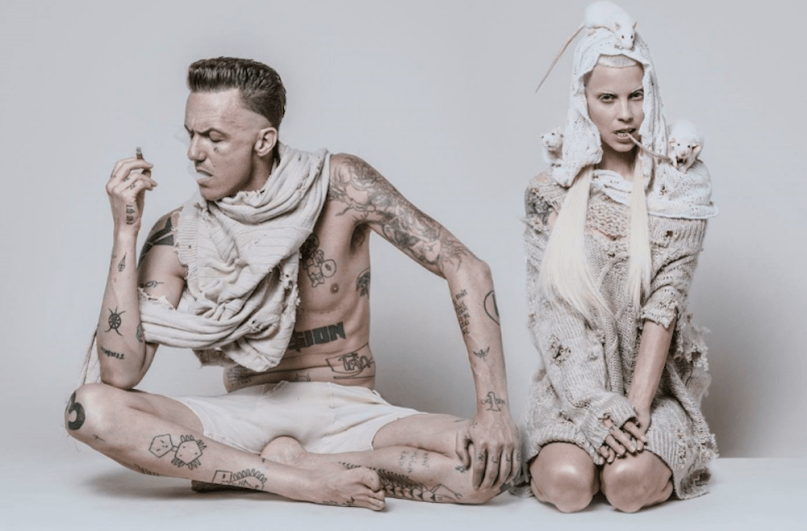 A video has surfaced that shows an alleged homophobic exchange between South African hip-hop group Die Antwoord and Andy Butler of dance act Hercules and Love Affair. In the clip, Ninja appears to physically hit Butler while Yolandi repeatedly calls him homophobic slurs.

The video first surfaced on August 4th, as noted by Resident Advisor. It was reportedly filmed in 2012 at Future Music Festival in Australia by Ben Crossman, the band’s former videographer. While the footage is shaky and dark, Ninja and Yolandi can be easily identified. Ninja appears to spit on Butler and attempts to shove him. As Butler runs away, the two follow, with Yolandi hurling homophobic threats his way like “Run, faggot, run” and “Oh my god, faggots are fighting. This is the cutest thing.” Ninja then turns to the camera and claims that Butler sexually assaulted Yolandi by feeling her up in a bathroom. Eventually Die Antwoord find festival employees to retell their side of the story. As Yolandi cries, Ninja laughs, saying, “She’s like Marilyn Monroe, this is Oscar Award Wining [stuff]…”

To anyone wondering what the ‘unforeseen circumstances’ are… Turns out @DieAntwoord are just a bunch of vile humans https://t.co/2ZMCjHmYHr pic.twitter.com/xampCXTa5b

Over the weekend, Ninja responded to the video on Facebook. In the post, he claims that the clip was edited by the former cameraman to frame them as instigating a fight when, allegedly, they were actually retaliating for something Butler did to them. At one point in his response, Ninja says Butler told them, “You need to get slapped through the face with my dick.”

“Ben has cleverly edited this video clip to make it seem like me and ¥o-landi commited a hate crime towards a person because they are gay,” the statement reads. “However Ben beat up the guy from Hercules himself while filming this same video clip. This was just a fight with someone who fucked with us. Not a hate crime. This fight had nothing to with the fact that this guy was gay. We dont care about people’s sexual preference. Our DJ and best friend DJ HITEK is gay, and alot of people in our crew are gay.”

Despite Die Antwoord’s explanation, the group has been dropped from several upcoming festivals, including  Louder Than Life Festival in Louisville and Life Is Beautiful Festival in Las Vegas. As of right now, Die Antwoord is still scheduled to perform at Riot Fest next month.