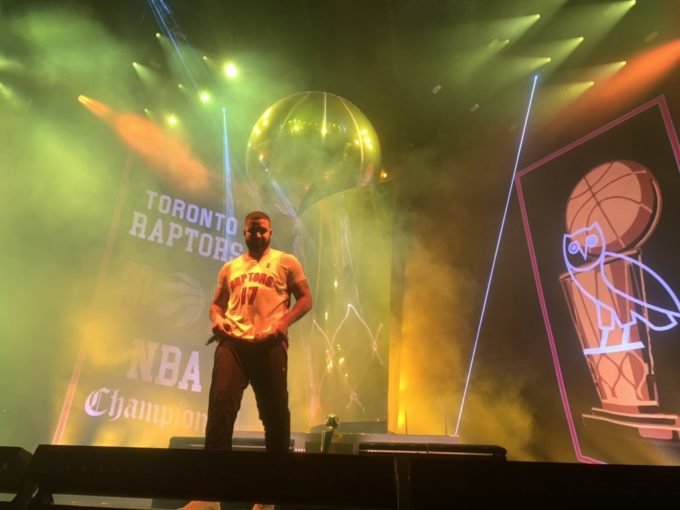 Toronto may not have Vince Carter, but it does have Drake, who this week is celebrating the epic return of his OVO Fest. And the hometown rapper certainly did not come alone. Following Sunday’s opening festivities, Monday evening’s main event was headlined by Drake himself and featured a host of star-studded collaborative performances.

To kick off the night’s main event, Drake strutted onto the Budweiser Stage alongside a super-sized version of the Toronto Raptors’ 2019 NBA Championship trophy. The 6 God then proceeded to march out a long list of guests throughout the night.

Cardi B, Meek Mill, and Chris Brown turned up, as did Offset, Da Baby, and Gucci Mane, who said it was his first-ever gig in Canada. Lil Baby, Tyga, Rick Ross, and the “Hot Girl Summer” herself Megan Thee Stallion also made appearances.

Among the highlights: Cardi performed “Press”; Drake and Ross did “Money in the Grave” for the first time; Cardi and husband Offset delivered “Clout”; and Drake and Brown dished out the live debut of “No Guidance”.

Initially, fans were bothered by the hefty price tag of OVO Fest tickets, but it’s looking like the costliness may have been worth it after all. Catch fan-caught footage and pics from OVO Fest below.

“I’ll exit the stage and leave you in the company of grace and greatness.” – @Drake introducing @iamcardib for #OVOFest #OvoFest2019. a dynamic duo. pic.twitter.com/C85z7OBIfc

Guest number 10@iamcardib took off her shoes she ready…#OVOFest pic.twitter.com/uSD84odNiF

Drake kept his word & got Gucci Mane into Canada For #OVOFest 🔥🔥🔥 pic.twitter.com/G8BzSCsBxh

“Toronto, I want you to recognize what this moment is” – Drake #OVOFest pic.twitter.com/rr6ICOHzpM

Drake had a giant Larry OB made for #OvoFest2019 😂 pic.twitter.com/ZjPMixo0Tg

And check out photos of the merch exclusive to OVO Fest 2019.

This year’s edition of the OVO Fest comes just days after the release of Care Package, Drake’s 17-track collection of B-sides, bonus cuts, and other rarities culled from throughout his career. Earlier this summer, October’s Very Own posted that he’s officially in “album mode”, so there could very well be more on the way from the Canadian rapper.